Carey Moore sets out 10 ground rules for Kevin Rudd if he wants to be prime minister again. 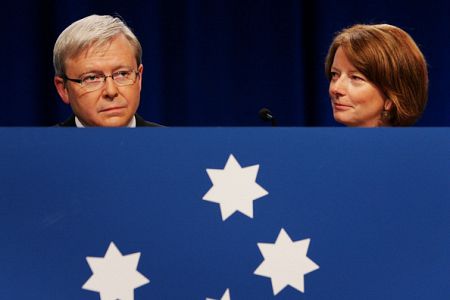 So, for purely hypothetical purposes, this is what I’d do if I was Kevin Rudd and I wanted to get the leadership back:

Be honest and forthright with them. Don’t be arrogant, though. Everybody makes mistakes, everybody can be forgiven. You have always been willing to play the game. Nothing has changed. However, make it clear you are the one who can turn the ship around!


2. Be prepared to compromise

This time has to be different. You can’t expect to just run things how you did the previous time. You need to be prepared to demonstrate that you’ve learned a lesson. However, you must be sincere — this routine has been done before by people like Kim Beazley and he fell back into his soft form in no time.


3. Run with someone interesting as your deputy

The name I have heard mentioned most often with a possible return by you to the leadership, as a deputy, is Stephen Smith. Whilst not a stupid choice – and certainly acceptable – he does lack a little bit of an edge — and makes a Right Wing MP become both leader and deputy leader (a no-no). You’ll need someone from the left. Perhaps the Victorian left? But it would obviously need to be a senior minister. Combet, maybe? Personally, if I wanted to be daring, and present myself as a reformer, I’d run with Penny Wong (I know she’s a Senator but that can be fixed, if necessary.)

Above all, do not run with Wayne Swan.


4. Show no acrimony towards Gillard or the “coup” plotters

This is very important. You don’t want the narrative to be “Kevin’s revenge!” You want it to be “Labor made a mistake but now it’s being fixed!” You need to adopt the attitude and rhetoric that you don’t hold against Gillard what she did because she believed she did it out of necessity. (In fact, concede that, at the time, she was probably right!) Like Gillard did for you, offer her the opportunity to be a part of your Government as she is still a very useful talent.

If you take the leadership back, the Coalition will already have their talking points all lined up and will be filled with hubris. Don’t let it get to you. Return fire with fire. Take the narrative of “OK, Tony, enough’s enough. This country is tired of your crap!” and run with the theme that you’re here to get the country back on track. Remember that same level-headedness you used to defuse Howard? Use it on Abbott.


6. Wait until the Carbon Pricing legislation has been assented into law before challenging for the leadership

You don’t want that bell on your collar. It was a poorly handled fiasco. Let Gillard wear it (both the positive and negative benefits.) This will give you an opportunity to move forward (ha ha) and set your own agenda. Not to mention not having to worry about a tricky answer to a tricky challenge.


7. Once PM, call a snap “House only” election ASAP

“Minority government is unworkable” is a valid reason to present to the people for justification. Also, it gives them the “election now” that they wanted. If you do it immediately, you should win a majority. The current makeup of the Senate is one you can work with, you need not worry about that. Winning an end of year election would ensure the House of Representatives won’t expire until late 2014 or early 2015, which means you can hold a House of Representatives + half Senate election as late as early 2014. Giving you about 2 and-a-half years to retake the agenda.


8. Any surge in popularity you immediately have is a honeymoon

Initially people will be delighted by the “Kevin’s back!” factor. It won’t last. Don’t make the mistake again of thinking that soaring ratings are just because the country really loves you. They will level again.


9. Don’t forget why you lost the leadership and why you are back

Don’t play victim in this regard. Yes, they did wrong but you clearly did too. Take a lesson away from it all and learn from it and never forget!


10. Don’t waste the opportunity you have been given

You’ve been given another shot and a much better hand to play with than last time. Don’t waste it. Be bold, be brave. Do that and you will one day have statues erected in your honour! (So to speak.)

7 September 2011, 12:02am Carey Moore sets out 10 ground rules for Kevin Rudd if he wants to be prime mini ...
Join the conversation
comments powered by Disqus
News updates