MATCHES MADE IN HOMOPHOBIA HEAVEN

where bestiality with consenting creatures

great and small is all the go

I AM MISSING Tess Corbett, late of the Bob Katter Nutter Party, already.

I don't mind telling you, I was about to turn; was on the cusp, and not just because we both share a name favoured by dog owners.

But I wasn't going to be selfish in my rampant lust and overwhelming desires. I thought a little bit of political speed dating was in order.

I felt she would be a good soul and futonmate for Hunky Dory Cory Bernardi, who is polite enough to mention in Parliament, to be recorded in Australian history and Hansard in perpetuity, the tender matter of animals and their consensual sex with humans.

Look upon our works ye mighty and despair.

I was so moved by Bernardi's Maidenhead Speech in the People's Palace last year that I came out from the pantry and declared the following in Independent Australia, all the while simultaneously making cupcakes decorated with hearts and smiley faces:

In the interest of transparency, I meant to put ' Victor' in there as well, but sent David Donovan the wrong version.

No one was more surprised at my self-outing than me. I thought I'd better man up and studied photos of Putin, Arnie and Abbott in varying stage of Ursula undress and experimented with costumes similar to that of the great soubrettes, taking a figleaf or two from Alexander Downer, wearing stockings made out of fishnets. 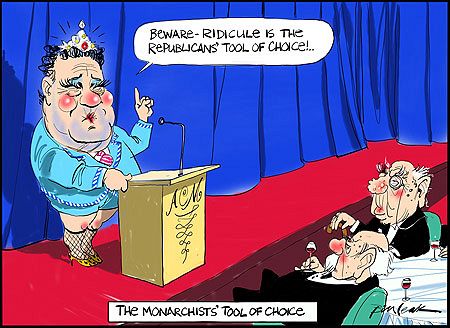 But somehow, I ended up looking like a paler shade of male. A Columbine without Pierrot.

Josephine without Napoleon. Cleopatra without Mark Antony. Chips without white bread and butter. Cory without a consensual beast.

Why St Bernardi is not the national patron of the Arse PCA is beyond me. I love Dr Hugh Wirth, but surely there is a little kennel or barnlaid chook, or paddock for Dear Cory.

Tess Corbett, who may or may not be related to one or more of the two famous Ronnies was, for a few too brief hours, perhaps the most celebrated candidate of Bob Katter's Australian Party.

I'm a great believer in Hee Bee Gee Bees and walk about with runes sewn into my Mumbai Bloomers and all of that.

So when I read that Tess Corbett had been nominated by Bob for the Federal seat of Wannon, I thought, 'ello, 'ello, if you turn the 'W' upside down, it spells Mannon and that's gotta mean Ms Corbett is on the money.

In due course, the alarmingly named Warnambool Standard's Everard Himmelreich interviewed Ms Corbett and published the interview on January 24.

It was an astonishing insight into the collective brain of Katter's body politic.

Everard went in hard. Crikey, he could have a job with IA.

He wrote that Tess Corbett said:

...both homosexuality and paedophilia went against Christian principles and that many homosexuals and paedophiles could not see anything wrong with their behaviour.

What is more, Everard said:

She feared paedophiles would fight for their activities to become legal in a similar way that homosexuals had fought for the legalisation of homosexuality.

Ms Corbett said she knew of a judge who had been charged with paedophilia who said he loved children.

“This particular person could not see anything wrong with what he did,” she said.

“He thought he had rights even though paedophilia is not legally and morally right.”

Ms Corbett said she put homosexuals and paedophiles “in the same category as moral issues”. Some elements of society “like to bring in their own agenda and change long-lasting laws”, she said.

“They should not be able to enforce their beliefs on the rest of society.”

Ms Corbett said she was against gay marriage, saying marriage should be between a man and a woman: “Any other deviation is a deviation.”

That last sentence cinched it for me. What a woman.

What's up with you Bob? Why did you dump her? For a start, she's a Christian. There's the entry fee, surely.

Plus, she's lumped in homosexuals as paedophiles; she's got that right, hasn't she Bob?

Personally, I was disarmed by her intellect. I think it was that which first drew me to her.

So, Bob, I became very alert and even more very alarmed when eveready Everard revealed that Ms Corbett had been told by you to 'lay low' on the subject of homosexuals and paedophiles.

What about 'freedom of speech' Mr Katter? Ms Corbett has Tessticles. 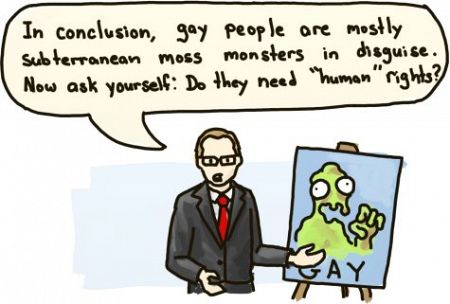 First, you do a 'Nova Peris does Darwin' as per the PM and parachute Tess Corbett as a token white non-Indigenous female politician into your party and then, as soon as she starts espousing the Latter Katter Day Saintly Party's fine Christian values, you give the little possum the flick.

And then you go and suspend the membership of your former National Secretary and electoral aspirant, Bernard Gaynor, who like me is not sure whether he's gaynor or not and that's why he changed his name from plain old 'Gay' to Gaynor. That sort of sexual honesty and solidarity is pretty moving, I reckon.

Mr Gaynor said he did not want Gay People teaching his children.

Instead of banning gay teachers, why not make it easier for schools and simply ban gay kids.

You'll be able to implement the Katter Test as early as kindergarten.

If you observe any kidlets playing with those wooden toys and they try to put a round peg into a square hole, you'll know you've got 'one of them' in the classroom. It's a deadset giveaway.

Oh, and another suggestion BobKatt, I reckon from now on, all future Katter's Party candidates should have to sign a declaration of inhuman rites and attest they are not homosexuals and thus, by definition, paedophiles.

That way, when you and all of your attractive KP candidates sweep into office in an inevitable  landslide victory, you'll have less chance of them 'coming out' from the Cabinet. Mr Bernard Gaynor, an Iraq war veteran, is having a gay old time with all of this and he ain't going quietly. Australian Associated Press is reporting that he plans to fight the suspension, claiming KAP leadership supports his views.

Gaynor is up for a fight and what's more he's supporting his Sydney counterpart Jamie Cavanough who said 'he won't buy halal meat because the proceeds go to Muslims'.

And presumably he won't buy Kosher meat, because the proceeds go to Jews.