The media lens is a microscope, 1,000 times more scrutinising of women than of men, writes Bruce Keogh. 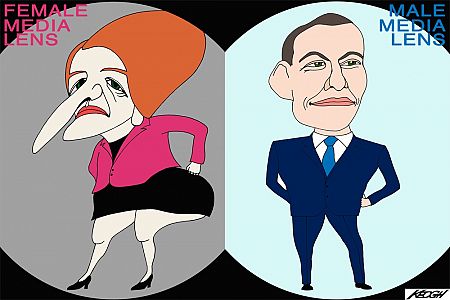 IT IS AS IF the metaphorical media lens is a microscope, 1,000 times more scrutinising of women — indeed, less critical of men. If Julia Gillard had bat ears, it is unlikely she would have made it to the prime ministership in the first place.

A word of caution: If you happen to be a highly intelligent woman with deep philosophical convictions and passion for the future of Australia, and have aspirations to become prime minister, go for it. But only if you do not have any physical imperfections that make you lesser in appearance to Elle McPherson. But then again, if you are blond, the media will destroy you anyway.

As if looking back on the demise of Julia Gillard, Marilyn Lake wrote a piece for The Age, just one day before Australia’s first female prime minister was ousted by the Labor caucus, in favour of a … you guessed it … a male … who will, odds on, not be sexualised by Australia’s media and wider culture.

An excerpt from Marilyn Lake's article:

How could we have foreseen what would befall her? The relentless persecution by senior male journalists, the vilification, the sexist mockery, the personal abuse and the contempt with which she would be treated. Between 2010 and 2013, the full force of Australia’s masculinist political culture would be brought to bear on this path-breaking woman.

It is now a truism that history will prove more sympathetic to Gillard’s prime ministership – and the policies she introduced – than contemporary commentators have been.

What will mostly attract historians’ attention, however, will be how she was treated, the rabid misogyny, the hysteria of men who could not abide the spectacle of a woman in power, who labelled her a bitch, a witch, a liar, a usurper, an illegitimate claimant who refused to bow down before her male rivals.

In the past three years, obscenity has become a favourite mode of prime ministerial denigration.

Marilyn Lake is Professor in History at the University of Melbourne researching the international history of Australian democracy. You can read her article on The Age website.