Despite claims to the contrary, John Howard plotted, cajoled, manipulated and lied to bring down the Australian Republic in 1999 — and has now received his due reward from the Queen. Managing editor David Donovan gives the definitive account. 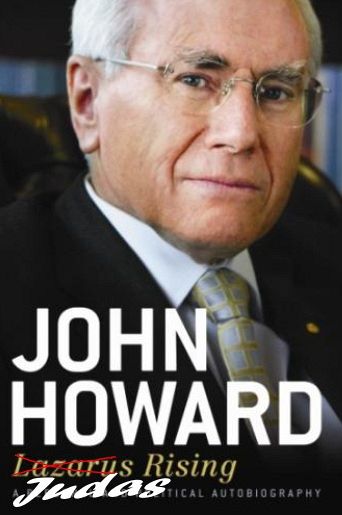 LAST NIGHT, John Howard received a shiny silver token from the Queen for “meritorious service to the Crown”.

Of course, according to a report about the award in London's Telegraph at the time the award was originally annouced in January, Howard is very close to the Queen:

'Howard, who supported the monarchy during a 1999 referendum on whether Australia should become a republic, said he and the Queen "have got to know each other very well" and he always visits her during trips to London.'

The award, and the subsequent closeness between the pair, comes as no surprise since Howard, as Australian Prime Minister during the lead up to the 1999 Republican referendum, played the pivotal role in preventing Australian from breaking with the British monarchy and becoming a fully and truly independent Republic. The Queen has simply given Howard – after a sufficiently and decorously long period had elapsed – fair payment for services rendered in 1997-1999.

This is simply the system of patronage we must expect our local elites to receive from an unelected foreign hereditary monarchy.

Some people, including Howard himself, try to claim that it was direct election republicans such as Ted Mack and Phil Cleary who were critical in stopping Australia’s push to become a Republic in the dying days of the last millennium. This is incorrect, they were merely fall guys and stooges — unconsciously acting out the roles set for them. It was, absolutely, without any doubt, Howard who was the primary reason the 1999 referendum failed, even though a clear majority of Australians wanted the nation to become a Republic — as he plotted, cajoled, lied, manipulated, schemed and deceived to bring it down.

A close reading of Howard’s uniformly self-glorifying autobiography ‘Lazarus Rising’ reveals the hard work Howard put in to defeat the push for Australia to finally become fully and truly independent of Britain. In the chapter he cringingly entitles “We still want you Ma’am — the Republican debate”, Howard attempts to justify and whitewash his role in the republican defeat but, unfortunately for him, is rather let down by his repetitive, reflexive, gloating.

For instance, Howard states in this autobiography that he knew very well

'…that the prospects of the republican cause succeeding were not very bright while the Liberal Prime Minister of the day remained in the other camp.'

Consequently, and for this explicit reason, he publicly stated on more than one occasion that he would stay out of the debate in the lead-up to the referendum. Of course, Howard himself put a very different tone on these statements and his subsequent actions in his self-serving account:

'From the outset I said I would not engage in regular commentary as I did not wish to exacerbate differences within the Coalition by too frequently joining the debate. I always knew as the referendum approached I would become more vocal.'

History shows that Howard campaigned long and hard in the lead-up to the 1999 referendum, clogging the media airwaves, as only a sitting Prime Minister can, to talk down the Republic at every possible and conceivable opportunity. This was, without question, a critical factor in the proposal’s defeat.

But Howard wasn’t content to simply campaign against the Republic, he also worked assiduously behind the scenes to further stack the deck.

Showing obvious bad faith, Howard appointed rabid monarchist Liberal Senator Nick Minchin to organise the 1998 Constitutional Convention. Minchin and Howard then came up with an ingenious plan they hoped would ensure the Convention fixed upon a publicly unpopular republican model that would inevitably split the pro-republic camp.

Constitutional law Professor George Williams explained how this was done in a 1998 law journal review of the Convention:

John Howard made it explicit in his opening remarks to the Convention that, unless a true consensus emerged on a model at the Convention, a plebiscite featuring different models would be put to the people to determine the model to be subsequently voted on in a constitutional referendum:

'I told the delegates that if a consensus behind a particular republican proposal came out of the convention, that proposal would be put to the Australian people in time for an Australian republic …. I hoped the convention would speak with sufficient clarity to remove the need for a plebiscite, presenting a range of republican alternatives.'

In a display of bald-faced effrontery, Howard claims in his book that, despite all indications to the contrary, a clear consensus did, in fact, emerge from the Convention:

'An overwhelming majority of delegates voted in support of a recommendation to me, as Prime Minister, that I put the ARM’s hybrid model for a republic to a referendum.'

Far from recording the “overwhelming majority” Howard declared, in fact, those voting in favour of the “Bi-Partisan Model” did not even constitute a simple majority of the total delegates at the Convention.

'The makeup of the Convention allowed the compromise model put forward by the Australian Republican Movement to gain clearly more votes than any other proposal. However, although somewhat hopefully named a Bi-Partisan Model, it failed to gain significant support from Liberal or National Party delegates. It also alienated many of the delegates supporting a direct election model. This was clearly evident when the following question was put before the Convention on its final day: Does this Convention support the adoption of a republican system of government on the Bi-Partisan Appointment of the President Model in preference to there being no change to the Constitution? Only 73 delegates, less than half of the Convention, voted 'Yes', 57 delegates voted 'No' and 22 delegates, including many of the supporters of a direct election model, abstained from voting. Despite a protest from one delegate over the fact that the Bi-Partisan Model had not gained the support of an absolute majority, or 77, of the delegates, the question was declared carried as more people had voted 'Yes' than 'No'.'

There was no consensus, there was in fact a massive rift over the model for a republic at the Convention — and yet Howard repudiated his word without hesitation and offered a referendum on a model that had a bare majority of voting delegates and less than a majority overall.

Dispelling any doubts that Howard and he had plotted this result, Nick Minchin has since publicly admitted that he and Howard worked to ensure the Convention produced a “dud model” so as to defeat the republican push. According to Phillip Coorey, in the Sydney Morning Herald, at a dinner held in August 2006 at Old Parliament House:

'Minchin, giving the warm-up address, made … reference to being back at the same venue where a decade before, at the Constitutional Convention, the conservatives suckered the republicans into accepting a dud model that scuppered the republic.

'According to those present, Turnbull, who headed the republic push all those years ago, walked out.'

There is no question that a model decided upon by the community would have stood a much greater chance of success in a referendum than the always publicly unpopular parliamentary appointment model. Howard lied to the Australian people about giving them a plebiscite if no consensus was achievable; if he had kept his word, we would almost certainly be a republic today.

But Howard wasn’t finished there — he still had a few tricks up his sleeve to further minimise the Republican vote.

He knew that Australian referendums are notoriously hard to win — with only 8 from 44 being successful. The reason most of these failed was a lack of bipartisanship — because it has been always easy to sway naysayers with the following simple refrain:

What that means is: if you don’t understand exactly what you are being asked to vote on, the safest course of action is to just vote “No”.

It’s an appeal to ignorance.

So, Howard ensured that instead of the Australian people being asked something simple, like

"Do you want Australia to become a Republic, replacing the Queen with an Australian head of state?"

Instead, the question offered to voters by his Government was:

"An Act to alter the Constitution to establish the Commonwealth of Australia as a Republic with the Queen and Governor-General being replaced by a President appointed by two thirds majority of the Members of the Commonwealth Parliament."

Howard’s argument was that he needed to provide clarity about the question — a fatuous lie, since all the detail necessary had been fully provided in the explanatory material as was quite proper and constitutional under s128 of the Constitution, which merely specifies that the vote shall be taken in "such manner as the Paliament provides".

Howard knew a complicated question could sway a vital few per cent. Indeed, exit polls showed many ordinary Australians, perhaps those with low levels of literacy, were suspicious about the wording — with many becoming confused about exactly what they were being asked.

And to confuse matters even further, Howard worked incredibly hard against massive opposition to ensure a detailed new preamble to the Australian Constitution would also be voted on at the same time as the republican referendum. Howard knew that successful referendums in Australia’s history have been voted on alone – as a single question on the ballot – and not confused by any other question or election. Getting the preamble onto the paper was seen as so vital to the defeat of the republic in Howard’s mind that he was prepared to intensively negotiate and horse-trade with the minor parties and Independents to ensure it passed through Parliament — and despite receiving massive amounts of criticism from all sides:

'There was an avalanche of criticism of the first draft. The Labor Party came out wholeheartedly against the proposed preamble, as did Malcolm Turnbull on behalf of the ARM. They thought that a separate debate on a preamble would weaken support for a republic. At one stage it looked as if the preamble would not get through parliament.

'After intense negotiation, I secured the support of the Australian Democrats….'

Of course, there were others who also played a part in denying Australia's Republic, though none played a role as central as Howard's.

In the words, again, of Professor George Williams: 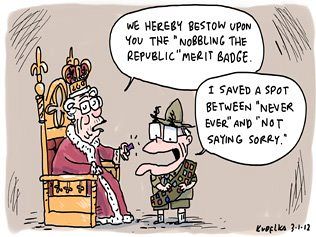 'No referendum has ever succeeded without bipartisan support, let alone over the prime minister's dissent. In the words of Turnbull: ''There is only one person who could have made … November 6 a landmark in our history, and that of course is the prime minister.'''

Much more than merely expressing dissent, as his own autobiography makes clear, Howard plotted with other monarchists, stacked the constitutional convention, fostered divisions amongst republicans, created a confusing question and threw other distractions into the mix. Moreover, he broke promises and lied to the people on numerous occasions to ensure Australia remained under the British monarchy.

In his famous speech on the referendum's defeat, Malcolm Turnbull described John Howard as “the Prime Minister who broke a nation’s heart” — and he was. But, at the same time, this self-admitted anglophile royalist made one old British Queen (at least) very, very, happy — for which he received last night somewhat less than the customary 30 pieces of silver.

(This story was originally published on 6 January 2012 in a slightly different form.)