Sydney bureau chief Ross Jones went along to Joe Hockey's defamation case against Fairfax yesterday to see if the treasurer makes a better witness than he does a budget; seems the jury is still out on that one.

THERE IS only one way to describe Joe Hockey’s appearance in the Federal Court on Tuesday 10 March:

This was a man out of his depth – usually several dark fathoms – but now finding himself stranded on the sunlit sands of the Federal Court.

Fairfax first published the now-famous Treasurer For Sale story at midnight on the morning of Monday 5 May 2014. Hockey knew it was coming. Fairfax journos had emailed a list of questions to his office – things like who are the NSF members? How many NSF ‘VIP boardroom’ functions had he attended as treasurer? etc - and asked for a reply by the evening of Sunday 4 May. Hockey replied with generalisations.

The questions were an irritating distraction, he said, from the intense pressure of preparing the budget.

A matter of minutes after Fairfax released its online story, Hockey was on the phone to editor-in-chief Darren Goodsir. Goodsir agreed to pull a few things from the online story — problem was the print edition was already to bed.

Hockey said he then worked from 1am to 3am preparing a media release stating "Fairfax media wrong" so it could be issued before morning radio got going.

Then, of course, the headlines in Manuka, the dreadful coffee and the troubled father.

Fairfax barrister Dr Matthew Collins QC, a word surgeon, led Joe down a channel he was clearly not comfortable taking.

On a few occasions, when Hockey started to get antsy, Collins pulled him back into line with a curt:

Joe Hockey doesn’t accept these words, attributed to him, on the NSF website #HockeyFairfax pic.twitter.com/MLCzs7Bm5P

The court was not at all like the warm depths of power.

Collins had Joe so rattled he unintentionally referred to himself as being "in the dock" rather than the witness box. Laughter all round.

I’m no court reporter and the following is not verbatim, but it is the gist:

Nothing to do with me.

But your name and photo are all over its website?

So, you’re saying your name and image have been used without your knowledge?

People do that all the time, Dr Collins, I’m famous. I’m the Treasurer of Australia, don’t forget.

But the money the NSF raises goes to you, doesn’t it?

No, no, no, not at all, it all goes straight to the Liberal Party; I get nothing, never taken a cent.

Why did you launch the NSF?

Well, there was no chamber of commerce for North Sydney and I thought we needed one.

But, there was a chamber of commerce?

Oh. I mean no effective chamber of commerce.

So the NSF is for local businesses?

Oh yes, networking and stuff. Local small business is in the nature of a chamber of commerce.

Do you know who the members are?

Not all of them, no. Dr Collins, I am a very busy man, I attend many thousands of meetings and functions and…

Did you know the New Zealand-based Fortune Technology Company – a poker machine manufacturer – is a member?

How about the ACT-based Brewer’s Association of Australia and New Zealand — a lobby group; is that of no concern?

How about Asciano, the Melbourne-based giant in the logistics business?

What about the Bus Industry Confederation? That a concern?

No. I’m still proud of my bus-driver’s licence.

How about Deutsche Bank and UBS?

Well, they have offices in North Sydney don’t they? 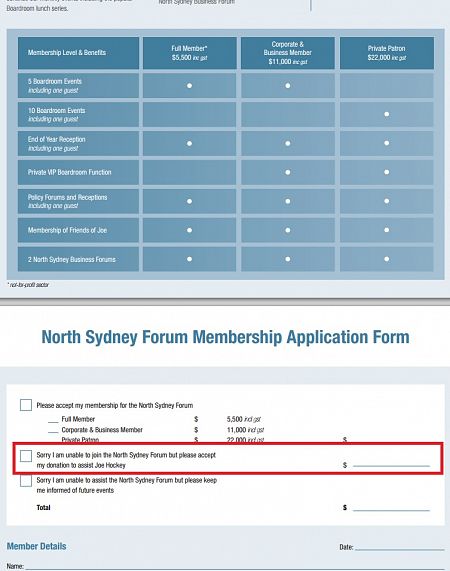 And you don’t receive any money from the Forum?

Not a bean. All goes straight to the party.

Then how come the membership application reads: 'Sorry I am unable to join the North Sydney Forum but please accept my donation to assist Joe Hockey?'

Dunno, I didn’t write it.

Why did Joe do it? Why did he hurl himself onto the beach to sue Fairfax?

He must have been aware his weak spot, the North Sydney Forum, was best buried in public forgetfulness. That Treasurer for Sale had become just another old headline in a fast-paced world. That the dogs had been nearly asleep.

Hockey said many things today before the court in regard to his relationship with the NSF, at one point being forced to concede part of his oral evidence conflicted with that in his affidavit. It was edgy and uncomfortable.

According to Prime Minister Abbott, Joe Hockey worked all weekend so he could attend court as "time in lieu" and is back at work, or something.

The case continues, however, with the Fairfax gallery greatly looking forward to Dr Matthew Collins QC having a little probe around Joe’s claims.

Help investigate Australia with Independent Australia by subscribing today for just $5 a month or $50 a year. pic.twitter.com/US1Gl6iqMA