Jacksonville 30: The best of friends 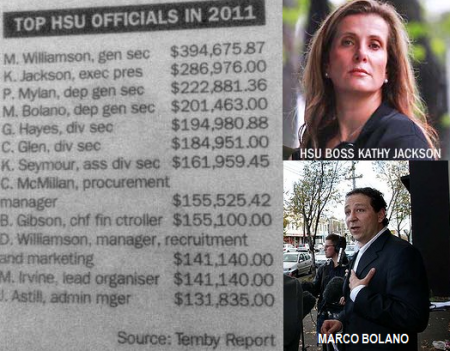 ISN'T IT NICE to know you have friends you can rely on, friends that will go the extra mile to make sure that you are okay, assist you when you’re in trouble, protect you, and never do the wrong thing by you.

HSU Administrator Michael Moore seems to be making friends, but is seemingly also making questionable decisions on the members’ behalf.

Last week, it was announced that Moore was going to take action to retrieve a massive amount of money from some of the elected officials.

[Get up to date: go to IA’s dedicated Jacksonville page.]

These officials had sought external advice and then voted to give themselves massive pay rises ― pay rises that far exceeded those of the members they were paid to represent. These officials included Michael Williamson, Marco Bolano, Peter Mylan, Carol Glen and of course Kathy Jackson. Many of you may remember that Jackson told us all numerous times, including when interviewed on 7.30, how she fought hard to have her pay reduced, because she thought she was hideously overpaid, it turns out she voted in favour of the pay rise. Surprise, surprise...

So how did all this come about?

Beth Jensen was commissioned, and paid handsomely, to review the salaries of HSU elected officials and determine if increases were appropriate.

In what must have come as a great surprise, Jensen discovered that these officials were massively underpaid. Apparently, Jensen seemed to think that salaries in line with an open heart surgeon, rather than a union official, were more appropriate. Ringleaders, and then friends, Jackson and Williamson’s salaries skyrocketed as a result ― as did those of the others. Some have questioned the basis of Jensen’s findings, but not me! 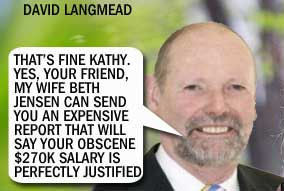 You see, Beth Jensen is the wife of David Langmead. David is not only Jackson’s lawyer, but also a family friend. Who better to assess your salary than a mate?

Administrator Moore has concluded that these pay rises were not only ridiculously large, but were highly inappropriate and totally improper in nature, and is now seeking to retrieve the funds back from those involved via the courts, so it can be put back into the union for the members.

However, it would seem Kathy Jackson has a new friend in Administrator Moore. Kathy has claimed to have reached an agreement with Moore so she does not have to repay the approximately $173,000 to the members that her friend, Beth Jensen, arranged for her to be paid. Moore has allegedly agreed for the money to be taken from unpaid entitlements that Jackson alleges are still owed by the Union that, under her watch, was almost sent bankrupt whilst she lived the high life from her multi-million dollar mansion.

There is only one way to look at this agreement ― and that is that Jackson is acknowledging that she has taken $173,000 from the members in a manner that could be described as deceitful at best. Now it would appear as if she is now down on her hands and knees before the administrator, desperately trying to avoid court once again.

This is an admission of guilt that she took an extra $173,000 pay her friend arranged for her ― on top of all the other questionable payments. The consultancy companies she owned that were billing the Union; the avalanche of credit card spending; the payments for her expensive child minding, that she claimed as being for staff uniforms; the random payments to her friends, like the $22,000 to Wai Quen; the extra money for a car, when the receipt from the car dealer shows it to be thousands less than claimed by Kathy; all the BCOM payments that other committee members allege to have not received ― the list just goes on and on. Now we have another $173,000 to add to the ever growing pile of, at best, questionable Jacksonville payments.

Kathy treats her friends and colleagues in a special manner. In doing this deal with Administrator Moore on the side, she has not only seemingly admitted her own guilt ― but at the same time thrown people like Marco Bolano under the bus. If Jackson’s pay rise was improper, so was everyone else’s –including Bolano’s – as they all came about in the same manner. Kathy has, it seems, dumped her mates in the crapper and done a dodgy deal to save her own skin.

It’s ironic that, in the upcoming HSU elections, Jackson is suggesting people vote for her mate Marco Bolano, while at the same time her actions suggest she believes he is guilty of taking the members for a ride to the tune of around $100,000. This makes Bolano about as trustworthy as a used car dealer and as electable as Sarah Palin on crack hunting moose.

If I was a member I would be looking to the facts before casting a vote at the forthcoming HSU election ― not listening to the opinions of shock-jocks and writers from The Australian facing defamation proceedings.

This dodgy deal also shows us that Kathy has found a new friend in Administrator Moore, someone I thought would know better. I may be wrong, but I was under the assumption that Moore was supposed to be working in the best interests of the Union members, not those he is seemingly accusing of stealing from them.

If Moore was looking to take Jackson to court to retrieve the $173,000 she fleeced from the members, it seems odd that he would be doing a deal now.


I was also under the distinct impression that the reason that entitlements had not been paid to Jackson and the others, including Marco Bolano and Michael Williamson, is due to there being a cloud the size of the Indian Ocean of doubt hanging over the legitimacy of those entitlements. I did not realise that the questionable entitlements were there as a “get out of jail free” card to avoid bad press before an election your mates are running in.

Also, have tax considerations been taken into account? If Jackson is looking to pay back $173,000 by having it taken from entitlements, then surely those entitlements would have been subject to tax. I would hate to see Jackson avoid paying tax on an amount that is more than 4 year’s worth of work for many of the Union members.

Or is Jackson keen to avoid court before her overseas trip?

Next year, Jackson plans to wed fiancé Michael Lawler, dud dancer, and Vice President of Fair Work Australia ― the organisation that produced the original, now discredited investigation whose findings diverted attention away from his fiancé. This wedding is to take place overseas, in Massachusetts actually, and given that Jackson is Greek, I hope that the authorities have checked out our extradition treaties with any countries she plans to visit whilst away ― as some think she may decide to do a runner. I would even question why she would be allowed to travel overseas at all whilst under investigation; after all, if we went back a couple of months, would Michael Williamson have been allowed to head off for Switzerland?

If Kathy Jackson is willing to throw her friends under a bus to save her own skin, imagine how quick she would sell out members?

Those of you voting in the HSU elections should look at this as another 173,000 further reasons not to vote for Marco Bolano, or the others on his ticket, Fleur Behrens, or Katrina Hart.