Well, it seems it’s finally going to happen — HSU East is actually going to cease to exist once and for all. Below is a link to the newsletter announcing it.

It would appear that the Administrator is aiming for tomorrow for the de-merger, thus splitting the union back into three pieces again. Those three pieces would be HSU NSW, and the Number 1 and Number 3 branches in Victoria.

This brings us to the election of secretary, and assistant secretaries, of each of these union branches — something there has been much speculation about.

Kathy Jackson, knowing just what to aim for, is hoping for the position of executive president, according to her words in a recent interview in The Australian. And why not? Who wouldn't go after that position?

Actually, there are quite a few who wouldn't. You see, what apparently hasn't yet dawned on Jackson yet is that after the de-merger that position won't exist. She would have a better chance going for a gig as the lead singer of Pussy Riot.

Still, the members in Victoria should be pleased Jackson has moved to Sydney for the occasion. Keen to show members she is just like them, she has changed her address to Chifley – a suburb near the airport – in a house that is far from glamorous.

For those of you getting all teary eyed and concerned after this drastic drop in living standards, don't panic. Remember, Jackson and fiancé Lawler aren't really struggling; it hasn't been that long since their combined incomes put them in the top 1 per cent of earning households in the country. You know, just like most of the Union members...

What Jackson hasn't told everybody is that the house she is renting in Chifley is owned by Katrina Hart, and Jackson still has her multi-million dollar mansion in Melbourne.

The latest report everybody was panting on was the Temby Report. Temby was appointed by the HSU to perform an audit into HSU East – nothing more, nothing less – as it was the HSU paying for his services — all $465,300 worth of it. Below is a copy of the minutes, which give the parameters for Temby’s investigation, you will note Michael Williamson is not named at all. 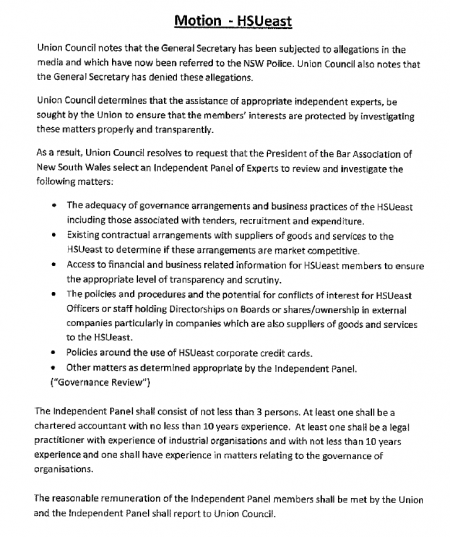 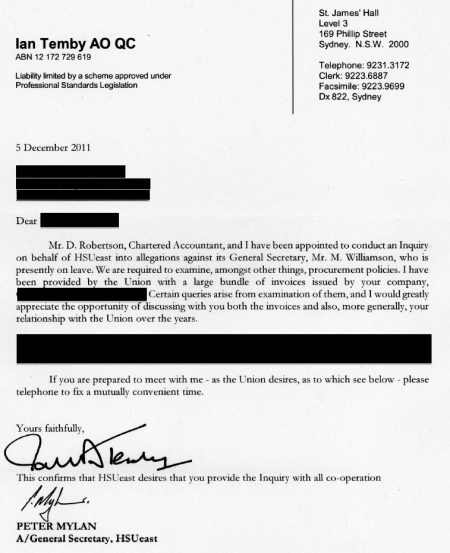 What on earth would have given him that idea? Or while inside the HSU — was he carrying out someone else’s agenda as well? Who may have been pulling Temby’s strings?

Below is another letter in which numerous suspicious financial dealings are pointed out to Temby, which would be appropriate to investigate or audit. 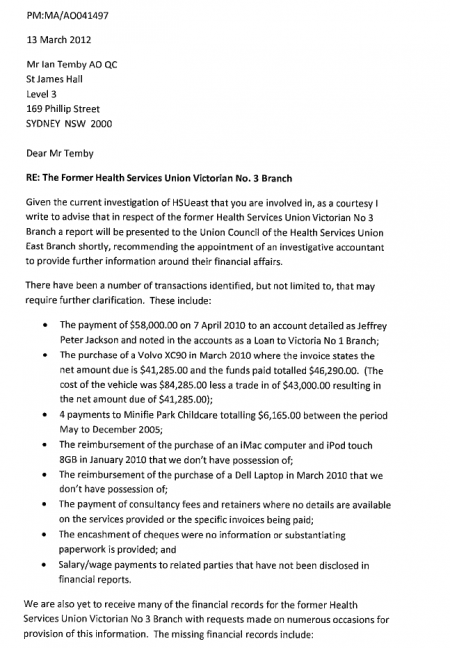 Temby’s response is that if it doesn’t relate to Michael Williamson, he’s not interested. 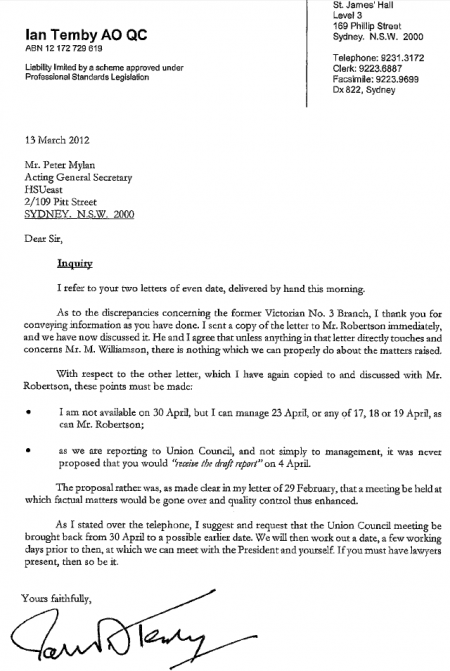 See Mylan’s letter to Temby and Temby’s reply To Mylan in full.

Why was Temby so adamant that he was only there to investigate  Michael Williamson — ignoring any evidence of corruption by any other party?

I am in no way whatsoever trying to say that allegations against Michael Williamson are unfounded or give any opinion of his innocence or guilt.

I am, however, saying that there is more than one person in this union that warranted investigation. It would appear to me that there is an agenda at work here.

It seems everyone looking into the HSU either has a puppet master, wears blinkers, fails to follow trails of evidence, or just knows nothing of due process.

Speaking of due process and failure, Kathy Jackson was due to appear in Federal Court again last Tuesday — of course, she didn’t bother showing up.

I hope in the upcoming elections, members decide to give the union the cleanout it really deserves.

We’d all like to see the members regain control of their union.

After all, it once belonged to them.

(You can follow Peter Wicks on Twitter at @madwixxy. See also our dedicated Jacksonville page, which contains links to all 21 stories in this series — and more.)