Tony Abbott is in Adelaide today to speak at a Liberal Party function — with State leader Isobel Redmond on the nose and precariously clinging to office. Former Liberal Party candidate Matt Donovan says it's time for Redmond to let go. 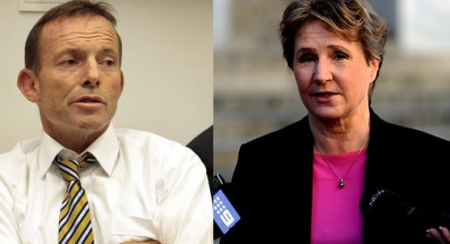 WHAT TO DO with South Australian Liberal Party leader Isobel Redmond?

A search on Google News last night showed 60 news articles, in every major publication in Australia, documenting her leadership woes. Her position as Opposition Leader looks terminal, as her ability to get any positive air time whatsoever in the South Australian media is now as sunk as the Titanic.

Frankly, if Redmond possesses any grace and goodwill, she will resign now rather than later — and save what little face she has left.

The embattled Leader is, as The Australian newspaper’s Sarah Martin wrote on Wednesday, “deluded” — it is only she who can’t see how untenable her position is and what damage she is doing to the Party and, indeed, South Australia as a whole.

The truth is, not only are SA Liberals crying out for change — but so are most South Australians. Labor voters who are unhappy with the Party’s performance in some areas are now wishing the Government had a decent Opposition to keep their own Party on the straight and narrow — it's gotten that bad.

Redmond, sadly, is as bereft of policies now as she was prior to and during the 2010 State Election.

Tony Abbott must be dreading his arrival in a State where the Liberals are as on the nose as the ALP is in just about every other state.

His arrives to speak to the party faithful for the State Conference today. Making speeches with the most unpopular State Liberal leader in the country must be filling him with dread. No doubt he will be looking to distance himself from Redmond and avoid any press conferences, as he will no doubt be asked only one question: "do you support the Leader?”

His answer, of course, will be the stock standard: “Yes, I do. It's a state matter and … ahhh … they don't need a Federal politician interfering."

Liberal Party members are asking: “What is happening to the Liberal Party in South Australia? Is there a chance of winning the next state election?”

The answer is “yes” if we are to believe the Liberal Party State President Grant Chapman. But then again, his shareholders may have also believed his businesses My ATM and Digi Slide were on a sound footing as well.

So, here we have a seemingly failed businessman being backed by the Liberal Party to support an Opposition Leader who prefers to be, by her own admission, to remain almost invisible by being a “small target”. To me, this doesn’t really sound like an inspiring advertisement for an alternative Government; to me, this sounds like the recipe for disaster and failure.

The question “Where are the Liberals?” is still reverberating.

The SA Liberals will have spent, at the next election, twelve years in opposition and – considering no-one has raised their hand to relieve Redmond – it seems blazingly obvious to all observers that no one believes they have the credentials to win the next election in March 2014. At that moment, the Liberals will have locked in 16 years in opposition…

Any commercial enterprise that fails for twelve years, and Grant Chapman must know this, must look at themselves closely and make serious changes.

Party insiders are saying a major clean sweep is needed; a new Leader must be willing to force the resignation of all the dead wood; any member Upper or Lower House must resign if they have served more than two terms.

This is a harsh penalty, but in many other industries, this is what happens. People that aren’t performing are constantly facing the chop, including AFL coaches, cricket team captains and company directors.

The Liberals must turn the sword on themselves if they want to do anything but be in opposition for a further twelve years.

Remembering the Battle of Semakh 100 years on

10 October 2010, 10:10am Manlygate is the title I have given to the undemocratic removal of Pauline Hanson ...

iPhone vs Galaxy S3: the battle of the behemoths