Instead of baring teeth, journos pampered Morrison during recent speech

SCOTT MORRISON'S ADDRESS to the National Press Club on Tuesday last week generated considerable attention for the way the Prime Minister attempted to launch his re-election campaign and for some of the aggressive questions.

Independent Australia Managing Editor Michelle Pini correctly discerned among the journalists present a ‘barely concealed impatience bordering on antagonism’. But this was not shared by all present. More to the point, this impatience is unlikely to get voters to switch sides.

A presenter on The Project suggested the assembled journalists were “baying for blood”. But were they really? Yes, bloodhounds were present, but they had all been neutered and muzzled. There were one or two snarls and some bared fangs, but nothing even close to an actual attack.

The reality is that the mainstream media is backing the Coalition again. But they are miffed that Coalition ministers are so incompetent and corrupt that they make the journalists look like they aren’t doing their job. 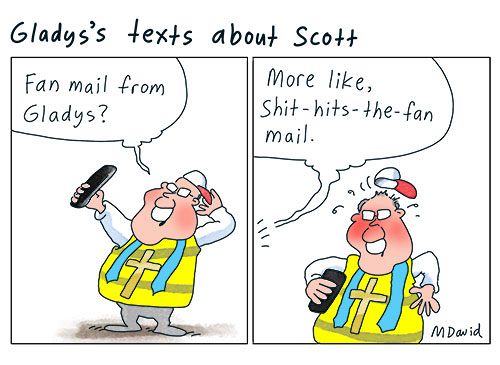 Abject failure to challenge the falsehoods

If they were vigilant watchdogs rather than strutting show dogs, all they had to do was challenge the veracity of the four central claims which have enabled the Coalition to steal victory or come perilously close to doing so, in eight out of the last nine federal elections.

But they didn’t. All 11 questions following the PM’s speech were from establishment kennels: Nine newspapers, Murdoch’s News Corp, The Guardian and the four television networks. Most amplified Morrison’s message that he is the right man for the top job.

In fact, that was precisely the question from the ABC’s Andrew Probyn:

“Why are you the best person to lead the Coalition to the next election?”

The question from The Australian was a perfect set-up for marketer Scott Morrison:

“Where does the political win come from? Can voters expect tax cuts over and above what’s already been announced?”

Morrison couldn’t believe his luck. While it may have been superficially challenging, his is the side the gallery wants to win.

Morrison spruiked enthusiastically all four old false messages which have kept Labor out of power and added a fifth arising from the pandemic. The lazy pooches queried none of them.

Australia’s economy is not among the world’s best

“Our economy has shown formidable resilience through the pandemic. It has outstripped the performance of most advanced economies in the world.”

Australia’s annual GDP growth currently ranks 30th in the OECD, the lowest ranking ever. On all other relevant tables, Australia lags badly most other advanced economies.

The Coalition has not balanced Australia’s budget

“And this [economic superiority] was greatly assisted by entering the pandemic with a balanced budget delivered by strong financial management.”

This is a monumental lie. The Coalition has never delivered a surplus. The nearest it got was a deficit of $690 million in June 2019.

When Wayne Swan and Julia Gillard claimed to have balanced the budget in 2013, the press mauled their throats out. The response of the current gallery to far greater mendacity is to roll over, wag their tails and go for a walk.

Virtually everything Morrison said on jobs was untrue or substantially deceptive. He claimed:

“I believe we can now achieve an unemployment rate with a three in front of it this year. Our goal is to achieve this in the second half of 2022. We have not seen this in Australia for almost half a century.”

That is false. The jobless rate in February 2008 was 3.98%. For 13 months of the first two years of Labor’s Rudd Government, it was below 4.5%. Morrison has only achieved that once in 40 months as Treasurer or PM.

His claims about good jobs outcomes ignore the shift from full-time to part-time jobs and the roughly 30% increase in the public service since he became Treasurer.

These things need smart sighthounds to track down and bring out into the open. Alas, Canberra has only overfed mutts asleep by the fire.

Taxes are always lower under Labor

As was inevitable, Morrison got to the biggest whopper of them all in his reply to the final question. He asserted:

“People know we are a low taxing government ... They know that because they are experiencing it ... If you want taxes to remain low, then vote Liberal and National, don’t vote Labor.”

It is true that people in Australia believe that narrative. But it is the opposite of the truth. Taxes since 1975 have always been higher under the Coalition than under Labor. This is confirmed by data from the Australian Taxation Office, the Bureau of Statistics and the Treasury.

Most of the mutts at the Press Club are aware of this, but they know their place. They are there to guard the Morrison Government from attack. No one barked about this.

In a fresh claim Morrison and his lapdogs hope will win votes, he said:

This was true in the early stages, but was not true last Tuesday. The rising death toll in Commonwealth-operated nursing homes has seen Australia become the country with the highest death toll of all major nations in the Asia-Pacific region in January.

Among all developed OECD member countries, Australia ranked a lowly 16th. Nowhere near the lowest.