An apathetic and uninformed citizenry, electing clueless second-rate politicians to govern us, is sending Australia to the dogs, writes uni student John Ray, who says we must reform our faux democracy.

Ignorance is slowly killing our country. Ignorance has landed us with the government and prime minister dubbed ‘Australia’s George Bush’.

I’m a 24 year old university student, and most people my age in my life have no idea about politics. They find it boring. They find it petty and dull.

They’d rather discuss sport, or Facebook – stuff more pertinent to their own lives. I don’t really blame them, this farce of a democracy we have at the moment is enough to deter even the most seasoned political reporter.

This is nothing new. But something my friend said really set alarm bells ringing. He remarked that we should go to Antarctica, because there’s "mad swell there, bro".

I mentioned that it was probably due to melting ice caps, rising sea levels and its associated impacts, and he looked at me as if I were an alien. He had never heard of climate change.

Whether you agree with it or not – but seriously, come on, the evidence is overwhelming – man-made climate change has been in the public forum for decades now.

Maurice Newman is an idiot with influence on Govt. Sign petition to sack him http://t.co/U8ICYSwEhu #auspol @AYCC pic.twitter.com/FEAQjzdO0x

But how did an Australian human live 22 years in this country without taking the slightest notice of the news? To me, the fault lies not with the individual, but with the culture in which that individual was raised.

He seemed concerned as I told him about melting ice caps, the soon to be open water at the North Pole and rising sea levels likely to wipe out many coastal cities. He relaxed when I told him it probably wouldn’t happen in our lifetime.

"Ah well, too late to do anything about it now I guess," he said.

There it was. It doesn’t affect me, so why should I care? Such an attitude pervades many levels of Australian society.

As long as we’ve got shelter, access to internet, food and whatever else essential services / creature comforts – and beer – it's no worries, mate.

But what sort of attitude is that? It’s one steeped in ignorance. It’s lazy. It speaks to our isolated little continent, the Lucky Country.

Lucky in the sense we feel it’s okay to wash our hands of the world’s problems.

Asylum seekers are a prime example. Another friend of mine, a little more politically attuned, commented that we need "strong border protection" so that we don’t end up "like England". But he has never been to England — nor anywhere else, for that matter.

Speaking about asylum seekers, he said:

"I feel sorry for them, I really do, but we can’t afford to have them here. I don’t like how they come here and try to enforce their culture onto us. We should just stay out of it."

Young Australians seem to have developed historic amnesia – or, perhaps more accurately, went through school around the centenary of Federation, where patriotism was mandatory and the ills of our past were glossed over (but that’s another issue) – about our past, where we came from, and the circumstances under which we came.

"The Government keeps throwing money at the problem, but they just waste it. We tried."

These facile, reductive arguments, which paint white Australians as innocent and blameless, are commonplace here in Queensland.

So too are emotional appeals to justify horrendous breaches of human rights. I’m of course referring to the state where people can be arrested for grabbing a beer, or getting an ice-cream together on their holiday. Where else but Queensland?

"But I’m glad they’re doing something about the bikies," they say. "They’re out of control."

Campbell Newman has painted bikies as a scourge, a threat to everyday people. But I know for a fact that most people in Queensland will never have any sort of meaningful contact with anyone from a motorcycle gang. In fact, most ‘bikies’ are not even part of such gangs.

Yet there the law stands. Much and more has been written about this incredible breach of justice, but most people reading the Murdoch press stand by their heroic premier in his steadfast resoluteness against the bikie menace.

"I’m not a bikie, I don’t have anything to worry about."

The downed flight MH17 is another example of what we’re fed, yet another 'operation.' Though this operational matter can indeed be discussed by our fearless leaders.

All I’ve seen and read about is the shocked, grieving families. I don’t wish to downplay the loss and grief that families of victims must be going through but should the media be seeking out the families and shoving microphones and notepads in their faces?  I’m sure they really appreciated it.

We’re an ignorant bunch, aside from a minority (and it is a minority) of politically active, interested people. You know, the type who see voting as a privilege, not a draining chore which takes them away from the beach or beer.

When a 22 year-old Australian has never heard of climate change, it’s worrying. It affects my generation — and future generations most of all. It’s not good enough. It’s especially concerning given this individual graduated from a private school.

There’s no easy solution, but here are some suggestions.

Firstly, we must introduce direct democracy.

Representative democracy made sense in 1901. Australia is massive, there was no other way for people in Perth to have their voices heard in the Federal parliament. But it’s ridiculous now in 2014.

We get to choose a mob once every three years that, as my political science lecturer put it, is "the least hated’. That mob then dances a fine line between doing things, saying they’re going to do things and then doing something else entirely.

Short-sighted policies designed to win the next election are generally the order of the day. And we have no say about what our government does during their time in office. None.

I wasn’t especially happy to read that we’re buying a bunch of fighter jets – because we can afford it – but we’re scrapping essential Gonski education reforms because ... we suddenly can’t?

In Switzerland, their government faced the same situation — but they have direct democracy. The Swiss public were sent out a brochure outlining the pros and cons of buying the jets, why they were deemed necessary and what various interest groups were saying about it.

There it was, a little bit of information about what decisions the nation faced, all in one easily readable document. With some quick Googling, more information could easily be found.

Then they put it to a vote — which vetoed the plan.

What a novel idea, that taxpayers get to actually decide what happens with taxpayer money. Not some corporate puppet residing in Canberra thanks to mining dollars, bound to party lines and the polls.

It makes our system seem like such a joke. It’s just so obviously broken now that it demands attention. We make everyone vote once every three years, in a system best described as ‘set and forget government’.

The majority of politically apathetic Australians enjoy such a system, because they don’t have to worry about keeping themselves informed. They might glance at the front page of the local News Corp rag in the weeks leading up to the election, but apart from that, nothing.

We must abolish compulsory voting — you should be allowed to not care, if that’s your wish.

We should give those who do care a greater say in where we head as a nation. At the moment, our voices simply aren’t being heard. How many Australians can put their hand on their heart and say they really want the Great Barrier Reef dredged? Or that our government continues to do absolutely nothing to address climate change?

So please, can we as a nation have a serious conversation about democratic reform? Let’s end the ignorance. 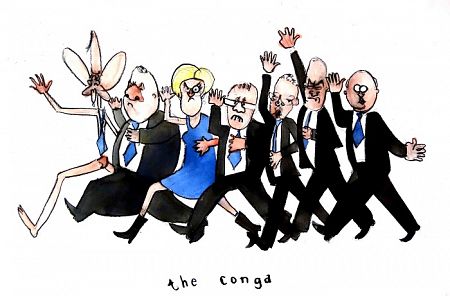