The ICAC hearings are showing up three levels of rorting — dills, manipulators and those who actually know what they're doing. Sydney bureau chief Ross Jones discusses the third.

The NSW minister for sniffer dogs, no take-away booze after ten and charges for affray unless one of the perps owns a casino and is definitely not underprivileged — gone.

Eightybyfive is not the game — five grand here, five grand there; silly pathetic amounts of money to risk a career and a few years mowing lawns behind a 16 foot fence topped with razor wire.

The game is worth much more.

The ICAC transcripts show three clear levels — dills, manipulators and those who actually know what they are doing.

So far, we have been exposed to the first two groups.

Dills into black ops and sucking up, and manipulators who had fun organising two-bit politicians and then convincing the dills to go along with it.

Then, there is a whole other level.

'Both offensive and repugnant', fumed Joe Hockey concerning any allegation his cosy North Sydney Forum was in any way compromised by selling his treasorial ear to specific interest groups.

Nathan Tinkler/any of the Gazals/any of the Obeids/ anyone who worked at AWH is a nobody.

Joe’s coterie – worker ants from of Sydney’s most reputable firms – might be happy paddle knee-deep in such shallow ponds, but we expect more from our real leaders.

Real leaders deal at the top. Not for them the grubbiness of email exposure. Their motto is no fingerprints, no DNA.

Sinodinos and Hockey are just bit players in the real game – destroying everything Australia is.

Who allows greed to destroy the reef, who allows crucial aquifers to become salty swamps not fit to drown a witch in, who wants to pay us all $2 an hour so we can sell biros and razors on the street for a quid?

Are our politicians actual idiots?

Or are they being bribed — seduced by the prospect of a trophy spouse (let's face it, wife, the perps are all guys) and a day at the races?

In NSW and Queensland it has ever been thus – Askin, Bjelke-Peterson —  but we’ve now reached new heights.

Forget the pollie pedal rort, or the reluctant declaration by Abbott’s personal slush fund the Warringah Club of $100,000 in obscure donations, or even Hockey charging his unnamed mates $3,000 each to share some private laughs with him on Budget day — let’s look at the big picture.

Unless Shorten gets off his arse, that big picture is a black landscape at night.

The problem with Bill’s arse is it’s stuck to the same seat as everyone else’s.

We are about to witness political upheaval. A new version of Australian politics. Everyone, from the burger masses to effete elite, is pissed off.

Micro parties, ‘2-stroke lawnmower enthusiasts’, ‘Rottweilers Rule!’ and ‘Drive over old ladies’; are all parties of the future. 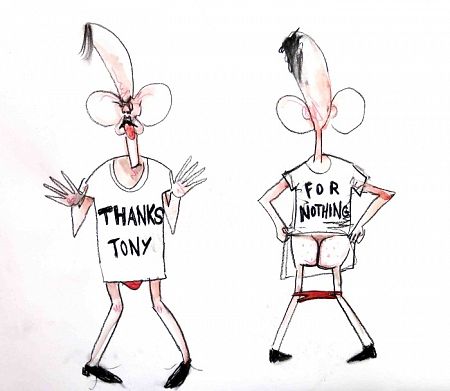