ICAC and the bagman who tipped a bucket

The ICAC testimony of  Chris Hartcher's ailing former staffer and alleged bagman, Ray Carter, could be the evidence that brings the Abbott Government to its knees, writes Sydney bureau chief Ross Jones.

A MAN, advanced in years − a gay man, dyslexic, diabetic, partially deaf; a liar, petty nicker maybe, but, ultimately honest and brave − could bring the Abbott Government to its liturgical knees.

When I was very little, my parents, for reasons unknown, held some kind of fete that involved the display of a carefully-constructed ziggurat of honey jars atop a portable table. Naturally I wanted to taste some and, hampered by my height and limited understanding of physics, grabbed the closest jar — that is, the one at the bottom of the structure.

I learnt a lesson that day. Take a bottom jar away and all hell can break loose.

Ray Carter could well be that jar.

Bagman and 40-year trusted ally of the cross-bench Member for Terrigal (Monsieur Hartcher, as Geoff Watson SC dubbed him) ate jelly-beans to stave off sugar shortfalls and had dizzy spells in the witness chair, but he did his duty.

Carter put himself in the line of fire.

He ducked a few times (who wouldn’t?) but, given the bizarre and intricate web of alliances and favours he has prowled, ever on the alert for trapped donors, it’s hats off for the following in an exchange with Watson: 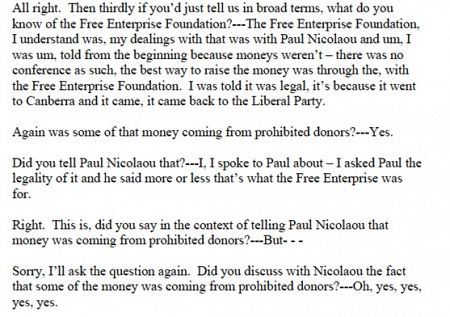 John Howard’s lovechild with himself, the Forum has enjoyed a cascade of cash from big swinging dicks since its inception in 1999.

Now, Carter’s evidence might well prove to be wrong — or not.

If not, it reads that Nicolaou was a party to washing dirty money into NSW for the 2011 landslide Liberal victory.

Nicolaou was the chief fundraiser for the Federal party.

That’s the main money men — for the PM and the Government.

Ray is at the bottom, just another jar.