I don’t want a ‘mate’, I want a prime minister, Mr Morrison 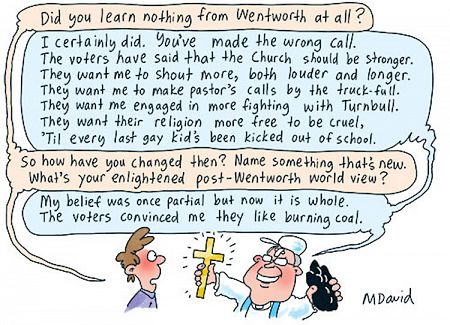 The fact that Scott Morrison thinks it appropriate to skull beer at the cricket to garner more votes, in 2018, is worrying, writes Noely Neate.

I DON'T really pay a hell of a lot of attention to Scott Morrison.

Don’t get me wrong, I pay attention to the reporting on his latest "idea" as, obviously, that affects the nation but not on the man himself.

If polls are correct and for once I hope they are, he is only an interim Prime Minister, a blip on the radar of rolling prime ministers in this nation, lasting less than a year in the job — a job, I don’t actually think he is suitably qualified for.

With the amount of look-at-me-style showing off he has done recently, the increased use of “I” and “my” when speaking, just reeks of a man desperately trying to stamp his authority on the Government and failing miserably. He comes off, instead, more like the scholarship kid at the exclusive boys private school, patently aware he is not really one of them, yet too in awe of the privileged to realise he shouldn’t aspire to be one of them, so goes out of his way to be noticed and to impress — all to prove he belongs and really should be captain of the First XV.

The Prime Minister's ridiculous encouragement of the use of the nickname “ScoMo” is peak “please like me”. Noting this was not a "nickname", it was a term originally used as shorthand on Twitter. It harks back to the days of fewer characters being available — Julie Bishop, to distinguish her from Bronwyn Bishop would be referred to as JBish, for example. Hey, nicknames are a funny thing, they come from all sorts of situations and often stick, though, trying to push the usage of a nickname is seriously try-hard, not to mention, pretty unedifying in a prime minister — you know, leader of the nation? I don’t want a "mate", I want a prime minister.

Not that Morrison is probably aware of how try-hard he is coming across.

Scott Morrison has always been tone-deaf. Even as far back as 2011, when in Opposition, he heartlessly condemned the then Labor Government for assisting relatives of those who died in the Christmas Island boat tragedy to attend their funerals. Of course, like most of his tone-deaf moments, he usually doubles down initially, then cooler heads prevail and we have the walking back of insensitive comments or actions.

.@ScottMorrisonMP says there has been some confusion over the Ruddock review into religious freedoms.

‘It’s a report the government will be considering and developing a balanced response to … it hasn’t been considered by Cabinet yet.’

He has not changed over the years. Astonishingly, for one of the most vocal "Christians" in Government, his most tone-deaf moments have shown very little Christianity. Even as recently as the leaked Ruddock Review into religious freedom which sensationally suggested giving schools the right to boot gay kids, Morrison got it wrong.

A humane – and dare I suggest "Christian" - person's first response would be “protect the kiddies”. But no, not Scott Morrison. All he did was repeat that “that is the existing law”, many times. Again, a few days later, after someone most likely tapped him on the shoulder and said, hey, Scooter mate, I think you are giving off the vibe you don’t give a shit about little kids — might adjust that, huh? Considering Wentworth was looming – an educated electorate who just happened to have a respected gay rights campaigner looking dangerous – of course, all of a sudden, Mr Morrison pledges 'to change existing laws to prevent discrimination against the children’.

There really are too many historical examples of Scott Morrison following this tired formula:

The latest version of this "ScoMo is a top bloke" marketing was at the Prime Minister's XI cricket match against South Africa. Of course, nothing says I’m a top Aussie bloke like sculling a beer at the cricket, ala Bob Hawke.

Let me state right up front, I’m no wowser. I love a few drinks on the balcony with friends and can point you in the right direction to the best cocktails on offer at the locals in my backyard, but… harking back 30 years to the "Bob Hawke, look at me I’m an alpha male, tossing back the "frothies" at the big sporting event to impress the blokes" is a whole other kettle of fish.

I understand he was encouraged by spectators in the crowd and was trying to just be one of the "blokes", man-of-the-people type crap, but it should not be a thing, now. It creeped me out and just seemed so irresponsible, try-hard, university/First XV style, "look at me, I’m a legend" showing off, which for many, has darker ramifications once the sporting event is over.

I’m not saying Scott Morrison is that sort of Neanderthal — I don’t think he is.

A disturbing reality - Whether teams win or lose, sporting events lead to spikes in violence against women and children https://t.co/L9zlp8jvuX via @ConversationEDU

But, he is the leader of this nation and when you take into account the following facts, a leader does NOT encourage this sort of tone-deaf behaviour that can result in real life damage:

Just looking at the above, we are educated enough to know that alpha male binge drinking behaviour at major sporting events can be a recipe for disaster behind closed doors, once the party is over. Anecdotally, we knew that back in Hawkie's day and we have evolved since then. Well, we should have.

We are in a crisis, one the Government is ignoring — until, of course, they hit the flash white ribbon breakfast with their wealthy mates and utter some useless but pretty words.

"Is it just that we’ve become so used to women dying through violence that we’ve run out of words?" @BickmoreCarrie asks why the murder of 57 women in 2018 is yet to be seen as a national crisis. Thank you for keeping #VAW on the agenda, @theprojecttv https://t.co/LC2QqrtbVr

It is bad enough that our Prime Minister is terminally tone-deaf, but for mine, it is downright reprehensible to mimic behaviour from a best-forgotten time for the sake of a few blokes giving you a cheer during a period of unprecedented violence against women, which he is also conveniently ignoring.

Mr Farr (political editor of news.com.au) may be right, Scott Morrison’s "man of the people" sculling at the cricket, might connect with voters and help to get him re-elected. The fact this so-called larrikin behaviour seems to be resonating with quite a few men as all good, harmless fun, in 2018, is worrying. That it may help Morrison graduate from an interim PM to an elected one? I sincerely hope not.

'Straya! What do we want, PM's who skull beers... when do we want them? Every 30 years or so... #auspol pic.twitter.com/U4wRRCaaez

EDITORIAL EXCERPT: Scott Morrison after Wentworth — denial as an artform.
Surely ⁦@ScottMorrisonMP⁩ MUST be aware that a majority of Australians do not support his policies? He might just as well call an election now - except he would lose benefits. https://t.co/PKVFBtYM7m