How the Mad Hatters Tea Party "won" the referendum

By Sarah Brasch | 16 August 2013, 1:19pm | comments |
The Mad Hatters Tea Party wing of the Liberal Party and LNP has claimed credit for the decision not to stage the referendum on local government recognition on September 7. Sarah Brasch reports.

BEFORE IT DISAPPEARS from view, possibly forever, it’s a good time to cast a critical eye over the referendum we weren’t, then were and now definitely are not having in conjunction with the Federal election next month — recognition of local government in the Constitution.

If you recall, holding this vote was part of the ALP’s minority government agreement with Tony Windsor and Rob Oakeshott.

The change was intended to make direct payments from the Commonwealth to local government authorities beyond legal challenge, by including “Local Government” in our foundation law and recognising it as a tier of government in its own right.

Here’s an example: the Roads to Recovery program, started 2001, under which councils were directly funded by the Federal Government to fix roads. No state governments involved to siphon off funds, fiddle, delay or divert into overhead costs.

The NO case website popped up as soon as PM Gillard announced the referendum in January. All ready — with a spot for the election date, that “someone/s” forgot to fill in before it went live.

The ‘NO CANBERRA POWER GRAB’ campaign was in your face, draped in the Union Jack part of the dull cloth that passes for our flag and an escaped Federation Star that had found its way up to the top right (of course!) of the homepage: 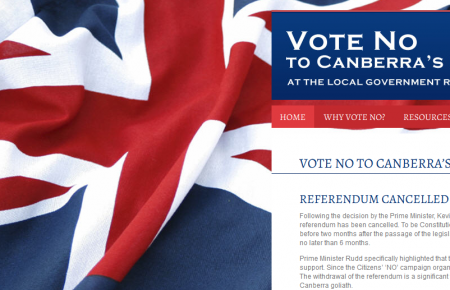 ‘MORE TO THIS THAN MEETS THE EYE’ hits you in the eye.

Above all, punters were exhorted to just vote NO.

The website contains dire warnings about changing the Constitution — not just a little bit, but at all:

‘Changing our Constitution will turn our democracy on its head and open the doors to a massive power grab by the Canberra politicians and bureaucrats to direct local services.’

‘…politicians are arguing that this change will be ‘small’ and ‘practical’ but we know the truth.’

Minor changes will ‘harm Australian democracy’, it blares. They will have ‘radical consequences’.

The NO case ranted that

‘…abuse of taxpayers’ funds to buy a change to the Constitution that removes the limit on power of Canberra politicians and bureaucrats” is guaranteed.’

The words ‘sneak’ as in ‘sneak through the change’ and ‘sneaky’ appear often on the site as do ‘corrupt’ and ‘corruption’.

Who is behind it all, this Tuckeresque rave against ‘Canberra’s power grab?’

Former Liberal Ministers, including the desiccated Peter Reith and Nick Minchin; Gary Johns, former Labor Minister turned academic, turned radical rightwing zealot; Julian Leeser, described by Peter Reith recently as a ‘rank-and-file Liberal Party member’, but also a local government councillor who just happened to chair the NO case for the republic referendum in 1999; and Tim Wilson of the IPA — the ubiquitous conservative mouthpiece on ABC’s The Drum.

And they’ve been bellowing NO for a very long time.

Remember the 1988 and 1999 referendums? Most of them were in the thick of those too — Tony Abbott and Sophie Mirabella close behind.

Abbott’s role in this one has been curious. First he told the Government he was supporting the referendum, then the bill was tabled and then, suddenly, he wasn’t —through allowing a small number of members to cross the floor. Otherwise with unanimous parliamentary support, there wouldn’t have been a NO case. Guess “someone/s” reminded Abbott very quickly that agreeing with anything PM Gillard proposed wasn’t a good look — somehow Dr No had inexplicably forgotten to say NO!

Right wing Liberal hero and grandee party sage, J. Winston Howard gets quoted on the NO! website, naturally. Before going too far, you stumble over recent writings by two other Citizens’ Vote NO Committee members, David Flint and Jai Martinkovits of Australians for a Constitutional Monarchy (ACM).

Peter Reith crowed at the success of the “concerned citizens” (see above) as well as ‘a small band of federal and State MPs and State premiers’ on ABC Online on 6 August.

The Citizens’ NO Campaign (new name) is now taking the credit for the referendum being dropped:

‘Since the campaign organised public support for this referendum collapsed (sic).  The withdrawal of the referendum is a significant victory for citizen David against Big government Canberra goliath.’

I see ‘citizens’ are male and the CNOC is having problems with upper and lower case.

The Committee and e-sites remain in place in case there’s any new attempt at local government recognition ‒ aka ‘Canberra’s power grab’ ‒ ever again.

It does have other altruistic goals, according to ACM, such as ensuring both the YES and NO cases get funded (they did bleat about how little they got, $0.5m compared to $31.6m for YES) and to ensure that the YES and NO booklet goes to every elector with the cases on opposite pages (sure they will catch-up with e-age eventually?).

But, really, their sole aim is NO!

Alan Jones didn’t get it right when he said that women were destroying the joint.

This reliable team of Vogon Constructors are the real destroyers — our own Tea Party. In fact, our own Mad Hatters.

Sarah Brasch is the National Convenor of Women for an Australian Republic and, like all republic campaigners, takes a close interest in the progress of referendums.