How Howard politicised the AFP and protected Downer and Bolt

Why are the AFP so eager to get Peter Slipper — but not Mal Brough? Ross Jones lifts the lid on Australia's police / media / conservative political party cartel. 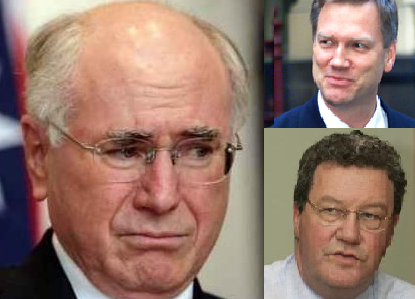 WHAT DO Andrew Bolt and the AFP (Australian Federal Police) have in common?

We don’t know — and therein lies the problem.

We seek not to nail Bolt; we seek to examine his special ‘friendship’ with the Liberal Party. And the AFP.

This goes back a while, way before stability control became standard in $15,000 cars; back when Andrew Wilkie was nice guy; 2003, in fact.

What you're about to read is based on published sources.

To begin this tale, let's get a little closer than 2003; let’s fast forward to 2006, to the third ‘anniversary’ of the Iraq War, when on 25 March former Sydney Morning Herald / Daily Telegraph / The Australian journo Alan Ramsey wrote in the SMH about a 2006 Senate speech by John Faulkner [IA emphasis]:

This [the speech] was an old-fashioned bucket job, a list of 86 "examples" of what Faulkner saw as "10 years of unrelenting ministerial failure". For instance: "This Government and its hand-picked sycophants suffer from the worst case of collective amnesia in political history. What are its bywords after 10 years? 'I cannot recall', 'I do not recollect', 'I wasn't told' and 'I don't remember'. Best of all we had [former AWB chairman] Trevor Flugge claiming the defence of being 'hard of hearing'."

But most titillating of all in Faulkner's litany of the Government's political and administrative abuses was example 62:

“And what about the Nixonian leaking [in June, 2003] of a classified intelligence document to [Murdoch columnist] Andrew Bolt [of Melbourne's tabloid Herald Sun] in order to politically assassinate its author, [former intelligence analyst] Andrew Wilkie, while not vetoing the leaker from contesting a Liberal Party preselection.”


Who could this possibly be?

For 18 months the Faulkner/Ray duo pursued this question through the Senate's estimates hearings. Bolt's story ridiculing Wilkie, who resigned as an analyst from the Office of National Assessments in protest at the Government's decision to commit Australia to the military invasion of Iraq in March 2003, was published in the Herald Sun on June 23, 2003. The story quoted from a report Wilkie had written in December 2002, before his resignation the following March.

Faulkner set down in the Senate the chronology of what followed, on June 23 last year — the anniversary of the Bolt article.

"We have been able to piece together, through committee hearings, what happened to Wilkie's report. It was written in December 2002. It was issued to a restricted list. All authorised copies were later returned and logged in accordance with ONA procedures for classified material.

"Then, six months later, on 20 June 2003, Mr Downer's office requested a copy - the only such request during the six months period. Three days later, on 23 June - a year ago today - Mr Bolt published his article. If the ONA handling system is worth its salt, it should reveal which of the original copies of the report were returned and when; and which copies, if any, remain with recipients.

“Well, federal police said no, they could not do that.”

But Ramsey was raking over old coals. Before that, on 9 September 2003, there was this, on ABC Lateline:

The Government denies leaking a report by former Office of National Assessments analyst Andrew Wilkie, in an attempt to discredit the vocal critic of its pre-Iraq war rhetoric. The ONA has ordered a federal police investigation into how elements of one of its secret reports on Iraq appear to have been leaked — twice. Mr Wilkie says his report was leaked to a journalist and a Coalition backbencher, after he quit his job in protest at the Government's stance.

In its request to the AFP, the ONA has stated that the Bolt article ‒ that's the Melbourne Herald Sun article ‒ does not contain any specific comment on any intelligence material.

Okay, If you say so; we’ll just see about that.

Wilkie did a gig on ABC Radio’s PM earlier that evening, with Catherine McGrath, where he was plainly accused the Government of leaking the very sensitive classified document:

I have no doubt at all that Andrew Bolt was quoting either from a copy of my assessment or from chunks of that assessment that somehow came into his possession.

I recognised when I read his article a number of sentences that were my work. They were either identical or virtually identical, so I have no doubt at all that someone in Government ‒ who, after all, is the only body that holds this information ‒ that somebody in Government deliberately leaked that information to Andrew Bolt.

One of the more unpleasant practices of certain members of the Howard Government is the strategic leaking of material to friendly right-wing columnists to damage troublesome individuals. The reputation of asylum seekers is often sullied in this way. A similar technique has apparently been used to discredit Andrew Wilkie.

On June 23 a curious article, by Andrew Bolt, was published in the Herald Sun. Bolt told his readers that he had "the only secret report that Wilkie ever wrote about Iraq" while working for ONA. It concerned possible humanitarian disasters that war might bring. Bolt mentioned the title of the report and its date. He quoted several passages from it. His purpose seemed to be to harm Wilkie by lampoon.

The document that Bolt boasted of having seen, and from which he quoted extensively, carried, according to Wilkie, a very high-level security classification, "AUSTEO codeword". The document contained sensitive intelligence supplied to Australia by foreign agencies on the basis that the information and its sources would never be publicly disclosed. On July 9, Wilkie wrote about the Bolt article to the Prime Minister. Already ONA had referred the matter to the Federal Police.

So there it is. If inspector Barnaby had been on the job, it would have been case closed and off for a pint with Jones.

Of course, the AFP had a bit on their plate in 2003. Raw from the brutality of Bali, caught up in the Solomons, and with fruit loops like Willie Brigitte mooching around, maybe they could be forgiven for not solving a major Commonwealth crime when tasked to do so.

Technology is grouse, but sadly it can’t provide us with a copy of Bolt’s article together with a copy of Wilkie’s report to lie side by side and compare — but the AFP could have done this in 2003.

While my sources consider Bolt to be no more than a monkey at a keyboard, the chances of him replicating more than three words in succession from the report — maybe a sequence like: ‘and then, perhaps’ are bugger all. The chances of five consecutive words being replicated are way less than bugger all. So, how easy would it have been to compare the two documents and deduce whether or not Bolt had repeated exact word patterns, as alleged by Wilkie?

Too bloody easy — that’s how.

No need to actually nab the culprit who nicked the thing in the first place and thereby risk serious political heat and possibly a demotion or posting to Alice Springs, but determining the innocence or otherwise of Bolt, Andrew, DOB 29 September 1959, should have been a doddle.

By way of diverting Murdoch readers (Look! Over there!), Honest John announced everything was completely kosher because the ONA had claimed Bolt’s article in the Melbourne Herald Sun article didn’t contain any specific comment on any intelligence material. Well, yes. It’s the ONA. What did he expect? That they would come out on the front page of some tabloid rag confirming a slice of Australia’s secret info?

So, a scribbler who had been described by the Court of Appeal in 2002 as "…at worst, dishonest and misleading and at best, grossly careless"; a man who went on to contravene the Racial Discrimination Act with his idiotic ramblings; a man totally obsessed by the imagined immorality and wrongdoing of others; the whipping parson of Holt Street; a sanctimonious punisher; this man avoided, and continues to avoid, AFP scrutiny because…..?

I refer you to Downer’s recent sickening rewrite of history.

(Postscript: 2003 AFP head Mick Keelty was succeeded by current head Tony Negus, who is ably assisted in the Ashby matter by ‘the name’s Raiser, Commander Raiser’, who was until recently Sydney Airport Commander - and we know how swimmingly that went. Catch up on IA's full Ashbygate investigation here.)