In the last day or so, Clive Palmer’s party signed up Peter Slipper, kicked him out and changed its name to PUP. WTF is going on? Ross Jones tells the tale. 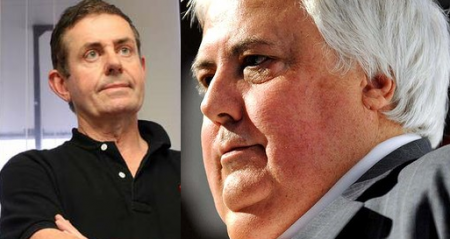 WHAT A FARCE. The whole Clive show looks for all the world like a naked grab for power by a guy with seriously grand delusions and zero empathy for anyone in his way.

The UAP media release announcing Slipper was about to join its ranks caught a few people by surprise.

Purely surmising from observation, mind you, Clive seems to be getting into a fix convincing sufficient followers to sign up to his noble cause, whatever that is — Clive for PM, it seems.

As the eleventh hour approaches and the membership growth stalls — who to turn to?

Hard to get an LNP member to defect — after all, they’re already drinking the cream.

Labor? The ranks are surprisingly tight. Polls or no polls, a defection to comrade Clive would be the end of their social life.

An Independent then. Someone who could do with some funding to shore up their electorate and bat off a serious opponent?

Windsor is facing Barnaby and the full might of the LNP. Slipper is squaring off against Captain Mal.

In early May, rumours began circulating that Clive was courting Windsor, but both men came out and said, coyly, that Windsor would definitely not join the UAP but would provide unspecified assistance.

But by Friday 10 May, Windsor was still not across the line.

Oh well, Slipper is probably easier and better bet to secure the primary purpose, that is, party registration. After that, Slipper’s reputation can be dealt with and if he loses, well, road kill really.

That’s it, then, the command went out: ISSUE THE PRESS RELEASE! 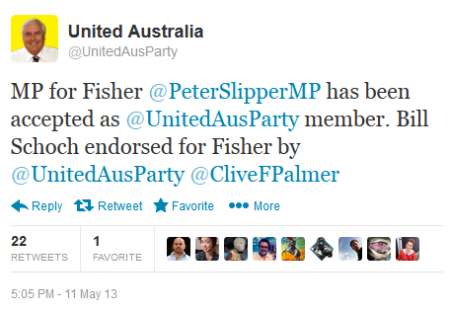 Five hours later, at 5.02am, the party tweeted it had ditched Slipper:

Must’ve been a hell of a night.

I’m guessing option 1 for the UAP shook hands at about 5.01am.

But what do we care of Clive’s clumsy machinations?

It goes to his character, as they say.

As any backyard psychiatrist will tell you, Slipper’s a tough guy, but Clive is only too well aware of the wringer he’s been through.

After all, Clive’s name is mentioned in the Ashby texts, and his bread-breaking with Brough and Hockey before Murdoch exploded the whole Ashby thing is well-documented.

So, to hire and fire a stressed guy after just five hours and in the middle of the night — unfair dismissal?

Here is the media release from Peter Slipper following shabby treatment by the UAP/PUP: 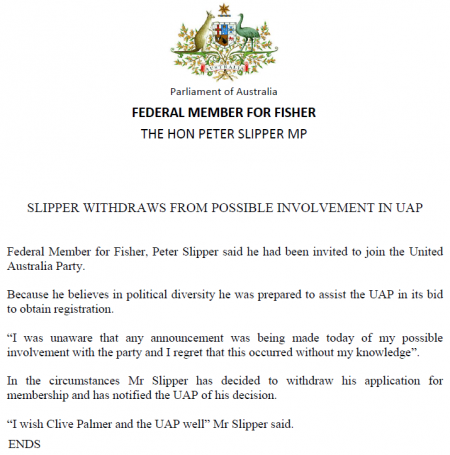