Four months ago, the big media proprietors were fighting proposed federal government press reforms, arguing that “the press” needs freedom if it is to defend the public interest. But these arguments were raised only to defend the media’s system of self-regulation.

What was absent then, and since, was any demonstration that Australia’s news media hold politicians morally accountable on the public issues that really do matter. The most pressing example is climate change.

The science is clear.

Over 97% of climate scientists and every major national science academy agree that the planet is warming due to human activity. Leading public health organisations and prestigious peer-reviewed journals have recognised that 'Climate change is the biggest global health threat of the 21st century'.


Why are they getting away with it?

In our previous articles, we focussed on the (un)ethical position of politicians who don’t accept the science of climate change, or won’t act on it. But what about the journalists who should be holding them to account?

You would think most journalists would be forensically questioning any politician who denied the science or failed to devise and support adequate policies to address this threat.

Unfortunately, very few, if any, of our mainstream journalists have ever really challenged climate-science-denying politicians.

In fact, the opposite has been true. According to research by Robert Manne, many major media outlets – notably the Murdoch media, and particularly The Australian – have actively created doubt about the science. They have misreported the science and supported inaction among politicians who should be developing climate policies and offering national and international leadership on the issue. 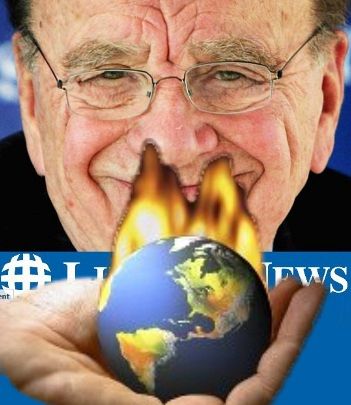 The news media have largely failed to cover the science and the solutions to the problems it raises. A report on coverage of the carbon price by the Australian Centre for Independent Journalism (University of Technology, Sydney) said that some major Australian newspapers were


'... so biased in their coverage that it is fair to say they ‘campaigned’ against the policy rather than covered it.'

The number of environmental journalists in Australian newspapers has declined, leaving the ABC and pockets of Fairfax as the only outlets to tackle climate change politics and science. This is a significant problem in Australia that has broad implications for national and international efforts to combat dangerous climate change.

Recent analyses of the statements made by our federal politicians have found that a large number of MPs and Senators have publicly denied the findings of climate science. Around half of all coalition MPs and over two thirds of coalition Senators have publicly denied the science. Because the overwhelming majority of the science-deniers are from the Liberal and National parties, the failure of the press to hold them to account becomes a major political and anti-science bias by the media.

More insidious than outright denial of the science is a new form of denial where the science is accepted but where the need for carbon pricing and government intervention and regulation is denied. This appears to be the current position of the Federal coalition. Again this goes almost completely unchallenged. This is media bias in the form of silence and failing to adequately scrutinise politicians’ claims. Why aren’t journalists scrutinising politicians when they claim that they “support the science”? Why aren’t they assessing the ability of climate policies to do what the political proponents claim they can do and whether they are capable of being scaled up to deliver the emission reductions that are required to prevent dangerous climate change?

Can you imagine if we had a large group of politicians who accepted the science supporting the life-saving benefits of vaccination programs but denied the role of governments in legislating for child vaccination?

Given that they have a duty to ensure public policy is based on scientific evidence, why is it that journalists haven’t questioned and challenged climate science-denying and policy-free politicians to explain their positions on scientific and ethical grounds?


The culture of Australian media

That such positions can be held but not defended while the science itself is attacked in Australia says much about the culture of commercial media in this country.

As in the United States (according to Pew) most Australians get their news from commercial TV (see page 9 of the Convergence Review). This format is suited to reporting live events, violence and conflict but not to the background needed for understanding big, global issues like climate change. Even when extreme weather events are covered, the dramatised suffering of individuals – rather than big-picture science – is highlighted.

This kind of news is all that politicians feel obliged to respond to, as they do their routine overflights of disaster zones and give nationalistic speeches about how Australians always pull together in a crisis.

In Germany, by contrast, where newspapers (in print or online) have traditionally been the most important news source, climate change policy features much more than it does in Australia and the US.

The enormous concentration of media ownership in Australia limits the diversity of reporting needed to cover climate change in depth. One company – News Ltd – controls 72% of capital city newspaper circulation. The same commercial values that legitimate this kind of monopoly in news (which also exists in the coal and energy industries) are unlikely to be challenged by journalists.

For example, business editors at News Ltd have long run the line that Australia’s coal industry (its associated jobs and balance of trade) would be hurt if politicians allowed climate change science to govern investment regulation. In the face of this, it has taken an international social movement like 350.org to initiate a divestment campaign in Australia, rather than the issue being chased by the media.

As the level of global emissions continues to increase and the urgency for real change grows, the atmospheric concentration of carbon dioxide has gone above 400 parts per million for the first time in millions of years

Yet Australia continues to avoid committing to the steep reductions in greenhouse gas emissions that are required to avoid dangerous climate change. The current bipartisan national emissions reductions targets (e.g., 5% by 2020) mean that Australians will use four times as much of the carbon budget as the average global citizen, making us a nation of emissions bludgers and hurtling the world ever closer to climate disruption.

What will future generations think about the climate science-denying media bias of today and the failure of Australia’s journalists to seriously challenge the group of science-denying leaders and politicians? 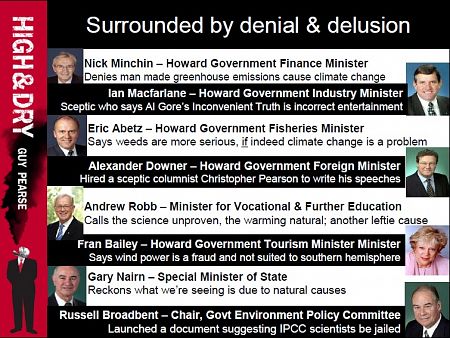 (Disclosure: Brad Farrant and Mark G Edwards do not work for, consult to, own shares in or receive funding from any company or organisation that would benefit from this article. They also have no relevant affiliations. David Holmes receives funding from Monash University Faculty of Arts for research into climate change communication. (This article was originally published at The Conversation. Read the original article.)
POLITICS ENVIRONMENT SCIENCE ABC Australian Centre for Independent Journalism Brad Farrant David Holmes Fairfax Media Mark G Edwards News Limited Robert Manne The Australian
Recent articles by