Housos hide while SBS disowns them 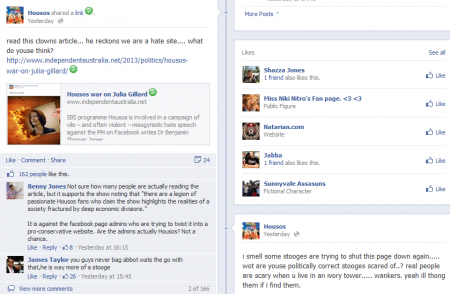 GROWING UP in Blacktown before moving to Penrith, the SBS comedy Housos had a great deal of appeal to me. It was more than the novelty of recognising the pubs and street signs, it highlighted the realities of life in some of the disadvantaged suburbs of West Sydney. I have taught in public schools in Cranebrook and Penrith and I have seen firsthand little Frankies and Shazzas. I have seen kids slip through the cracks and turn to petty crime and welfare dependency. I have also seen kids break this cycle, especially through education, and make a better life for themselves. I understand that the show has its critics but, as someone born and bred in the West, I am a fan.

As a fan of the show, I naturally joined the Housos Facebook page, but I was horrified by what I saw. Far from being a page to celebrate the humour of the show, it is a gathering place for right-wing trolls to attack the prime minister and ‒ usually tacitly, but sometimes explicitly ‒ champion a Coalition government. I monitored the page over several months, but eventually felt compelled to expose the violent and misogynistic comments not only tolerated but instigated by the admins. The reaction to the article has been extraordinary.

SBS has responded by washing their hands completely of any responsibility for Housos. In response to the torrent of complaints about the page, Lusia from SBS Audience Relations has this to say:


Thanks for taking the time to contact SBS. SBS did indeed air Housos but are not affiliated with the Housos Facebook page in any way at all.

I sent this email in response:

Thank you for your quick reply. Having now seen the death threats, violent and sexist comments aimed at the prime minister on the Housos Facebook page, I have two follow up questions.

1. Will SBS be airing Housos later this year?

2. Will SBS make any attempt to ask the administrators of the Housos Facebook page to remove sexist and violent comments?

Even if SBS do not run the Facebook page, surely you acknowledge that the behaviour of your actors and the official fan pages of your shows reflect on you as the broadcaster. Will you take any action whatsoever? 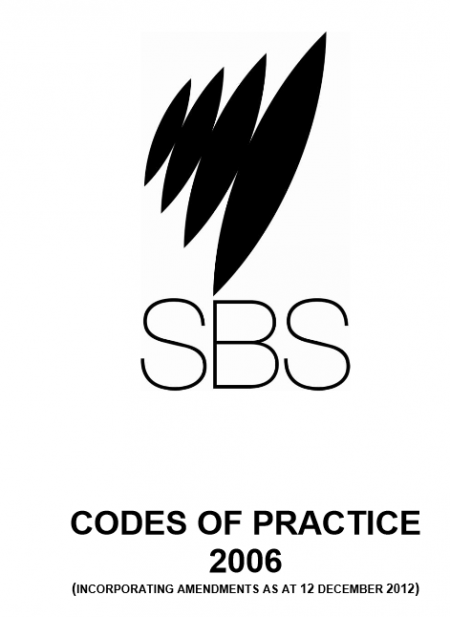 
Housos is not scheduled on from what I can see. However I have passed on your feedback to our Online and Programming department for their information.

That is all well and good, however the Housos Facebook page claims a second series will be aired in July — presumably on SBS. If that is the case, SBS have an ethical duty to ensure that shows they endorse and air adhere to their own standards.

The SBS Code of Practice (Section 1.3) states that:


SBS supports the elimination of all forms of discrimination against women. The representation of women should not create or reinforce stereotypes regarding sexuality, gender or race. SBS will avoid broadcasting programs that suggest that the exploitation of women is acceptable.

The sexual language, threats of violence ‒ and even death ‒ against Julia Gillard are not only tolerated on the Housos Facebook page, they are encouraged.

How have the admins of the Housos Facebook page responded?

One would expect, at the very least, they would delete the many plainly sexist comments and statuses. This has not happened. Quite the contrary, the admins came out with this status:


Ok ppl... Some journo reckons this page hates Julia gillard ... Well stooge we don't hate anyone we do comedy so our fans can have a laugh posh wankers like this professor big brain might call us vulgar but that's typical of the way university educated people judge working and unemployed ppl ..... But as fans of housos feel free to tell this journo what you think of our prime minister and the opposition.... 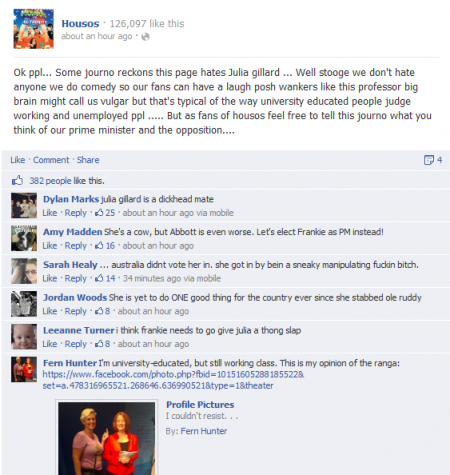 With that the floodgates were open. The language again was not moderated by the admins. Tony Abbott did cop some flack but the wrath was clearly aimed at Gillard. The attacks were blatantly sexist, employing gendered language to degrade the prime minister not only as a leader, but as a woman.

This is a small selection of the comments aimed at the prime minister: 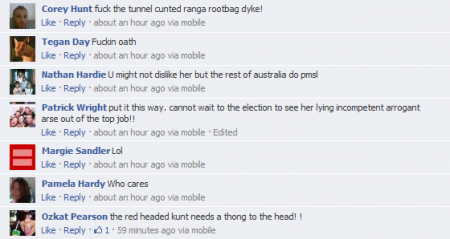 
Julia Gillard is the blood on a tampon


she a money grabbing bitch

along with the more prosaic


I'd vomit on the bitch.!!!! Bulimic or not I'd spit vomit on that bitch quicker than I can stick my fingers in my mouth and tickle my throat !!!!

and the inevitable Godwin’s Law invocation 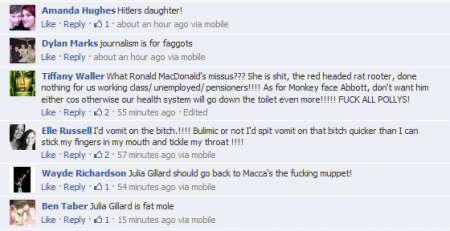 Again, there were death threats:


only good pollie is a dead one kill the ranga cunt

and, the more specific 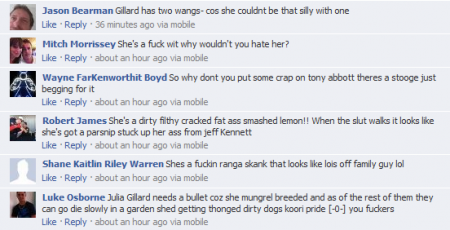 So, who are the admins of the Housos Facebook page? It appears that Paul Fenech is not often the man behind the statuses. He identifies himself in one status, indicating that it is usually someone else.

I emailed the Housos page to ask who was behind the statuses and if they would like to comment on the recent article or have an interview. There was no response. Instead, the admins posted a link to my first article stating,


read this clowns article... he reckons we are a hate site.... what do youse think?

Of the 164 comments, several actually approved the article and questioned why there was an anti-Gillard bias in an election year. The majority however simply hurled abuse at me and the prime minister.

In a reasonably hollow gesture, the page offered an anti-Abbott status to try and balance the anti-Gillard hate. The status read:


ppl ask why we dont thong abbot? we dont have thongs big enuff to smack his earwings

The response was underwhelming compared to the Gillard statuses, with one fan writing:

Clearly this particular fan had missed the recent events and was confused why the Gillard bashing had come to an abrupt halt.

This should be an open and shut case. The Housos Facebook page should simply monitor their comments and remove blatantly sexist and violent comments (as they should have done anyway according to Facebook’s code of conduct). All they would have to do is refrain from partisan comments and return to the more neutral attack on authority that appears in the show. The admins have refused.

As things stand, SBS cannot air this show in July, as the official Facebook page flagrantly disregards its Code of Practice.

The Housos Facebook page clearly suggests that the exploitation of women is acceptable.