Honest Harry and the unruly rabble


The Speaker of the House of Representatives is a man of steel and a lesser politician would have given up trying to control the current rabble which makes up the Opposition’s front bench.

Of course, having a thug like Tony Abbott as it’s Leader doesn’t help the more macho – male and female – MP’s; they sniff blood and throw manners and discretion to the winds.

The main offender is that bore from South Australia, Christopher Pyne — who is manager of opposition business and is capable of talking through wet cement.

His inane “points or order” make the more serious MP’s on his side of the House cringe — and more often than not Speaker Jenkins tosses him out for 24 hours. That the man responsible for managing the opposition’s business is so out of control illustrates what a dolt he is.

Further along from him on the front bench is the Liberal’s granny figure – albeit a glamorous one – Bronwyn Bishop; who in an Abbott government would be Speaker; reason enough for never, under any circumstances, voting for a change of government.

Bronnie would trash the rights of MP’s in a House under her control and, in the discipline department, would make Madam Lash look like a Sunday School teacher.

Gareth Evans once remarked that it’s better to hate her right away.

“Saves time later when you get to know her,” he quipped.

For all her posturing about her unsurpassed knowledge of the Standing Orders, Harry Jenkins sighs deeply and gives her a 24 hour suspension — much to the relief of the more balanced MPs from all sides of the House.

Peter Dutton is another front bencher who regularly tests the Speaker’s patience and gets thrown out for his trouble.

Dutton, Abbott’s health spokesman, is a former Queensland cop and was one of the handful of red-necked Liberals and Nationals who absented themselves from the House when Kevin Rudd apologised to the Stolen Generations. 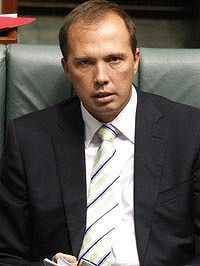 Dutton is one of those people whose eyes remain as cold as charity while his face “smiles”. He gets his marching orders quite a bit and it says a lot about Abbott that Dutton has a sensitive portfolio like health — more often than not Nicola Roxon makes him look the idiot he is.

Another recalcitrant is the dreadful Sophie Mirabella — whose arrogance is breathtaking. She’s adopted the thuggish walk and body language of Abbott and when she is removed by Speaker Jenkins the look on her face is a picture an artist would find it hard to paint. Or, to come to that, would hardly want to.

Considering the lack of obvious talent on Abbott’s front bench it would be wise if those mentioned – and a few others – had more consideration for decent behaviour, particularly when the House is televised and when hordes of school children fill the public galleries.

Harry Jenkins is a master of dignity in a turbulent sea of miscreants; a man or woman who is half an opposition leader would pull them into line.

Obviously Abbott considers confrontational behaviour as par for the course and more than likely encourages it.

A letter writer (Andrew Gemmell, of Carlton) in Friday’s The Age newspaper got it right when he reminded us we now have a female Prime Minister, Governor General, richest person and most loyal deputy opposition leader.

Surely,” wrote Andrew,” Julie Bishop could be no worse than Abbott.”