With the Greens supporting the Liberals to get watered down tax avoidance measures through the Senate last week, Labor member Peter Wicks looks at another lesser known recent example of the Greens siding with the Tories.

LAST WEEK at Sydney’s Leichardt Council, something happened that surprised many political observers.

The Greens voted against helping refugees and, instead, backed the Liberals and the racists that filled council chambers. It seemed to many, the Greens in Leichardt have their own refugee turn back policy.

At least that’s the story the papers told and, while that may be the gist of it, there is more to the story than just the Greens bowing down to some local Nazis.

In Rozelle, there is a large complex called Callan Park, which was long used as a mental health facility. There are, however, large sections within Callan park that are not in use.

Given the crisis going on in Syria and the fact that Australia has agreed to take in a token number of refugees (nowhere near enough in my mind) the Labor Party in Leichardt thought that it would be charitable to offer a welcoming hand to some of these desperate families and offer accommodation at the Callan Park facility.

The Labor members of Leichardt Council put forward a notice of motion so that due consideration could be taken beforehand by the other councillors.

That motion proposed by Labor Councillor Simon Emsley was to investigate the possibility of using part of the Callan Park facility as a Refugee Welcome Centre and temporary accommodation facility for refugees to help them adapt to their new environment and offer them assistance whilst settling. 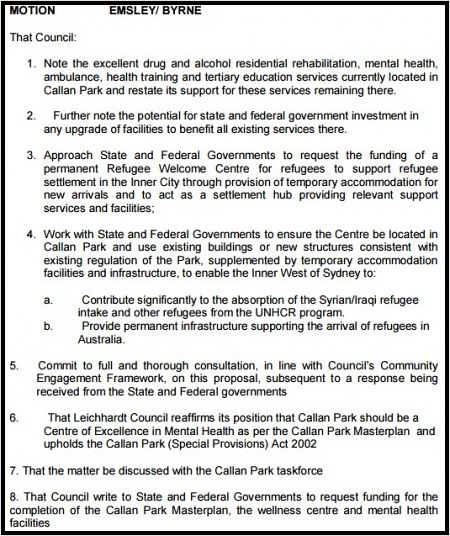 The motion was for investigation and community consultation only.

As one might expect, the Greens supported the motion and the motion was set to pass with or without the Liberals. The Liberal’s have a long standing view that the facility should be used solely for mental health issues and that the area in question should be heavily funded and refurbished for that purpose. This is a view seemingly reliant on squeezing blood from a stone, as the funds are not just sitting there waiting to be spent and the areas in question have been vacant for up to 30 years.

The matter was being heavily discussed in the community and had widespread support, with the notable exception from one community organisation, the Friends Of Callan Park who, like the Liberals, had other plans involving blood and stones.

It is important to note that, up until this point, the Greens were supporting the motion fully and had spoken in support of it.

However, was this support genuine or was it all for the public's benefit?

The Greens suddenly made their support conditional upon the inclusion of some amendents like these below:

That Leichhardt Council writes to the Leader of the Federal Opposition and the Prime Minister calling for an end to mandatory detention, all asylum seekers to be processed onshore and be permitted to stay in the community on bridging visas with the right to work while their refugee status is determined . Calling for all offshore detention facilities to be closed and for no children to be detained in any detention facility.

This is a ridiculous amendment, clearly is done for PR purposes by the Greens. The Greens know that this would never be supported by either Party, both of whom appear to be committed to offshore immigration detention.

Greens say no to refugee base at Rozelle https://t.co/5GaI7UrmpV

That Council put up a banner that says ‘Leichhardt Council is a refugee welcome zone and is committed to welcoming refugees'.

For the Party that has spent so long condemning the use of slogans to insist that a banner is made with a slogan emblazoned across it and having it hung up in the suburb again seems absurd.

That Council write to the Prime Minister and opposition leader calling on them to work towards peace in Syria and other areas of conflict in the world.

That this be referred to the Callan Park task force.

This is just plain idiotic. The Greens want Malcolm Turnbull and Bill Shorten to work together and do what the United Nations have failed to do, bring peace to Syria and have Israel and Palestine smoke a peace pipe, amongst other such things. Just to make the notion of this even more comical, they want the miracle peacemaker delegation to be called the “Callan Park Taskforce”.

That Council write to State and Federal Governments to request funding for the completion of the Callan Park Masterplan, the wellness centre and mental health facilities.

This last one would see millions of taxpayer dollars in funding handed over to the completion of the Callan Park Masterplan, something involving the Friends Of Callan Park.

These amendments were put forward by the Greens and rejected, as they would have doubless expected.

The Greens then sought for Council to change its longstanding rules and allow another motion to be put up at short notice. When this attempt at an abuse of process was rejected, they claimed Labor had manipulated the process by following the rules.

In the end, the motion didn’t pass due to the Greens siding with the Liberal Councillors.

The Greens then pumped out a media release (note: the capitals are theirs, not mine) stating:

It seems the Greens don't understand that council decisions don't override those of Federal Parliament.

On the night of the vote in council, the chambers were full of racist protesters, many claimed that the Greens members chose to back down in a show of gutlessness, however I don’t believe this is the case at all.

The group was not Reclaim Australia as many have claimed, they were a mob that was orchestrated by local bigot Nick Folkes. Folkes claims to not be a Nazi, a bogan or racist but he is extremely vocal on many issues and these issues, more often than not, involve people with a darker shade of skin to him. Remember when the Burqa debate in parliament was in full swing and those idiots turned up at security in Klu Klux Klan and other outfits?

That was Nick Folkes and friends.

The actions of the Greens on this occasion are what is known as “wedge politics”. It means using your numbers to try push your opponent into a position they don't want to be in and then slam them for it.

The Greens, in their attempts to put in amendments, sought to give Labor Councillors only two options: to criticise their own Federal Party or vote against their own motion. Either option would give the Greens ammunition to use against Labor in upcoming elections. The refugees would appear to be merely pawns in their political game, their needs an afterthought at best.

Unfortunately for the Greens, this attempt at skulduggery failed and they have only succeeded in shining a light on their own motivations.

What is also interesting and an indication that the Greens were never looking to support the motion, despite their public comments, is that the President of the Friends Of Callan Park is a man by the name of Hall Greenland. 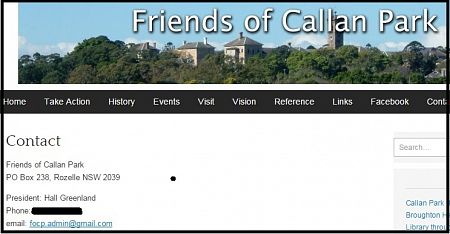 Hall Greenland is the Convenor of the NSW Greens.

Some may even remember Greenland as the Greens candidate who ran against Anthony Albanese last Federal election.

So here is the Convenor of the NSW Greens heading a local lobby group that opposes the plans to help refugees and people wonder why the Greens suddenly changed their mind? Call it a hunch, but I don’t think it was racist redneck related.

Also featuring prominently on the Friends Of Callan Park website is the State Member for Balmain, the Greens Jamie Parker. Regular readers of mine may be familiar with work on union resources. It is clear that Parker and Greenland work closely together and I think there is a damn good chance they were behind the whole political point-scoring plot. 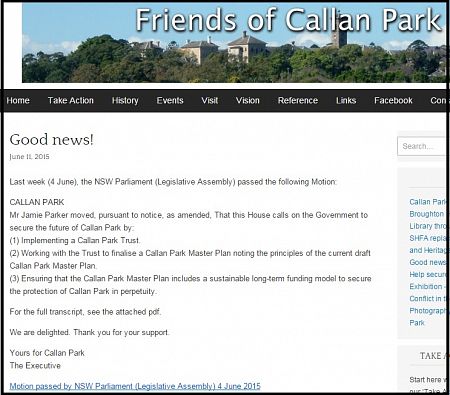 One thing that has been made abundantly clear is in NSW given a choice between long suffering refugees, millions of dollars of funding for vested interests, political point scoring, wedging political opponents, and political slogans the Greens have allocated the refugees a position in their priority list.

How proud the membership must be…

Greens sell out, team up with Liberals to vote in favour of keeping big business' tax affairs secret #auspol https://t.co/qPAYGx7sxz

No fear or favour. Subscribe to IA for just $5.