Desperate to pass its media reform bill, the Turnbull Government is bargaining the ABC for support from Pauline Hanson and David Leyonhjelm, writes Ranald Macdonald.

THE FUTURE of the ABC is not a "bargaining chip" for the Coalition Government to use to pass legislation in the Senate.

Yet a deal brokered by Communications Minister Mitch Fifield to gain Liberal Democratic Senator David Leyonhjelm’s vote some months back has already come back to haunt the Coalition Government.

It related to the estimable push for more openness at SBS and ABC board meetings, with PM Malcolm Turnbull and Fifield successfully pressuring the respective boards to agree.

But, how does that square with political independence for our public broadcasters?

Now Senator Pauline Hanson and her One Nation Party (has there ever been a more ironic choice of nomenclature?), using her dislike/hatred of the ABC, which has given journalistic space to claims about impropriety and disruption within her party ranks, has chosen to play the ABC card.

One Nation indicated their vote on media changes would be dependent on the ABC's budget being cut — “decimated” would be another description.

The commercial media’s reporting on this attempt at improper (and probably unconstitutional) blackmail is largely conflicted, as the major media groupings are supportive of media “reform” proposals being proposed by the Turnbull Government. (By the way, "reform" by definition means to change to improve.)

It is an unholy mess, with Senator Fifield trumpeting that all media groupings support his "reforms", without publicly recognising that the major media would all benefit by getting more dominant, Murdoch gaining even greater ascendancy with the removal of ownership restrictions and anti-syphoning commitments, and Fairfax becoming a more valuable takeover target.

That is quite apart from the lessening rural and regional commercial coverage Australians will have – which will inevitably follow – and current moves to take away the commercial requirements to provide children's television programs.

All of the above places a greater reliance on the embattled ABC to cover the nation’s needs, and to be a strong and independent source of news and information within already increasing budgetary pressures.

So, One Nation is moving in for the "kill" — a word especially chosen!

The ABC Friends National President Margaret Reynolds said publicly when Senator Leyonhjelm’s vote was obtained, that the use of the ABC and SBS to achieve his vote was a conflict. Not just because of the awful precedent set by Government pressure on our national broadcasters, but because the objective was actually constructive.

Now we have One Nation trying to use its muscle to achieve what it cynically wants.

That is why the ABC Friends national organisation has launched its "Defenders Campaign".

It is a critical time for those that believe in the catchphrase "democracy demands diversity" in both the media and in the range of options available to it.

More information is available on abcfriends.org.au.

And hats off to the Australia Institute with its full page ad in the Sydney Morning Herald today (16/8/17) for all Australians to consider Pauline Hanson's One Nation demands and other challenges to the ABC and SBS. 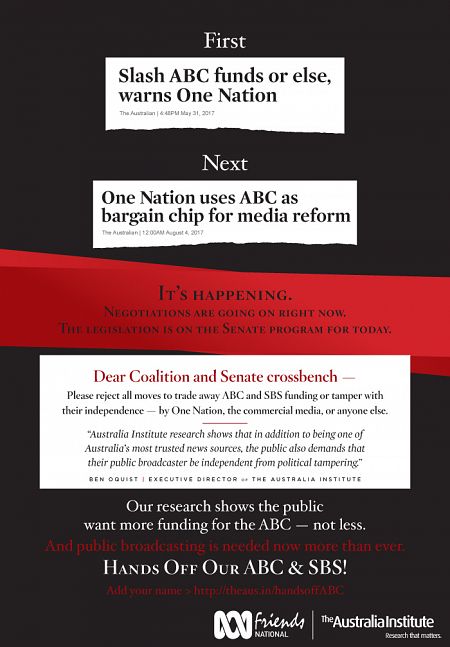 Ranald Macdonald is a Friend of the ABC and the former Editor in Chief of The Age newspaper. This article was published on 'Pearls and Irritations' and is republished with permission.

Brought to you courtesy of the Murdochracy: Media reform and the Murdoch mafia's Ch 10 con @davrosz https://t.co/x5oxJ93qVC @IndependentAus