The Prime Minister has said many times that Australia has a low budget deficit and debt to GDP compared with other major economies, and pointed to Australia’s AAA rating as evidence of a strong economy — and he is absolutely right to do so, says Griffith University Associate Professor Fabrizio Carmignani (via The Conversation).

“We have among the lowest of budget deficits and debt to GDP of any other major economies in the developed world… If it’s so bad, Mr Abbott, why have we been given by the three ratings agencies a AAA credit rating?"
~ Prime Minister Kevin Rudd, ABC AM, 5 August.

THE PRIME MINISTER has said many times that Australia has a low budget deficit and debt to GDP compared with other major economies, and pointed to Australia’s AAA rating as evidence of a strong economy. But how accurate are those claims?

As Rudd explicitly compares Australia to other major economies, it is necessary to use a multinational database that guarantees cross-country comparability and consistency of statistical information. For this reason, the International Monetary Fund (IMF) World Economic Outlook Database from April this year is chosen as the primary data source.


How much debt does Australia have?

Net debt to gross domestic product (GDP) ratio is a way of counting how much national debt a country has when compared with the total value of the economy, as measured by GDP. It is used as one indicator of the economic sustainability of a country’s debt.

Chart 1 shows the latest IMF data on how net debt to GDP has changed since 1995, with Australia’s performance charted in comparison to other economies including the Group of 7 nations, the European Union, the Euro Area nations (which only includes the countries that have the Euro as a currency), and a grouping of more than 30 “advanced economies”, including Canada, Germany, Hong Kong, Israel, New Zealand, the United Kingdom and the United States.

From 2013, the figures shown in Chart 1 are estimates. These are the best and most current comparable figures on net debt available – although as I will discuss shortly, it is important to consider the IMF forecasts in the light of the recently revised Australian Treasury forecasts.

As Chart 1 also shows, the Australian net debt to GDP ratio is low by international standards. The average for the Euro Area in 2012 was 71.9%, lower than the figure reported by the Prime Minister (90%), but still more than six times higher than the debt level in Australia.

Out of 26 advanced major economies for which net debt data are available in 2012, Australia had the sixth lowest net debt to GDP ratio (including countries that reported a negative net debt).

Chart 1 also indicates a worldwide increase in debt ratios since 2008. This increase was largely due to the expansionary fiscal policies (a combination of tax cuts and higher public expenditure) that many countries adopted in response to the Global Financial Crisis.

According to the IMF estimates, Australia is expected to be able to arrest that increasing debt after this year and to reduce the ratio by 7 points of GDP by 2018. This projected decline is larger than the average projected decline in the comparison countries.

However, the consolidation of Australian budgetary position may be slower than initially expected in view of the Labor’s government weaker-than-expected economic statement last week, which showed higher deficits and higher unemployment than forecast in the May budget. (You can read the official economic statement here.)

Explaining the decision to cut interest rates last week, Reserve Bank Governor Glenn Stevens also observed: “In Australia, the economy has been growing a bit below trend over the past year. This is expected to continue in the near term as the economy adjusts to lower levels of mining investment. The unemployment rate has edged higher.”

However, Stevens did put Australia’s position into a global perspective, noting that: “Recent information is consistent with global growth running a bit below average this year, with reasonable prospects of a pick-up next year”.


How do Australia’s public finances look?

Table 1 provides some details on public finances in Australia and Europe over the period 2008-2012, as well as some indication of expected future trends (the figures from 2013 on are estimates).

A combination of a decrease in revenue and an increase in expenditure pushed Australia’s budget balance to a record of -4.7% of GDP in 2010. (The budget balance is equal to revenue minus expenditure, therefore a figure of -4.7% means that the deficit amounted to 4.7% of GDP.) However, the peak of deficit in Europe was significantly higher.

Out of 34 advanced major economies for which fiscal balance data are available in 2012, Australia had the 13th lowest deficit (including countries that reported a surplus).


What’s a AAA credit rating worth?

Credit ratings are designed to help investors judge governments and businesses' ability to meet their financial commitments – and AAA is the top rating available.

In this AM interview, as well as at his election campaign launch, the Prime Minister asked a rhetorical question about why Australia would have been given a AAA credit rating by the major credit agencies if the economy was not strong.

In fact, there is some debate among economists about the reliability of credit ratings. In the aftermath of the Global Financial Crisis, rating agencies were criticised for their inability to correctly see through the junk financial products that eventually led to the collapse of several financial institutions.

More recently, some observers have argued that the credit rating agencies were slow to downgrade the world’s largest economy, the US, despite the US Federal Reserve spending trillions on bailouts during the GFC. Others argue that their assessment of some European economies' rating has been at times inconsistent and not always linked to the underlying economic fundamentals.

Opposition finance spokesman Andrew Robb echoed some of that criticism recently when he said on ABC News Radio:


“I remind you that Lehman Brothers, the collapse of Lehman Brothers, which started this global financial crisis, on that very day, they still had a AAA credit rating… You can’t place enormous store in the rating agencies. They do get things very badly wrong".

It might therefore be argued that having a AAA rating does not necessarily say everything about the economic conditions of a country.

Still, not many countries can currently claim to have a AAA rating – and all of those that do appear to be in strong economic and financial conditions.

Perhaps a better way to assess the strength of Australian economy is to look directly at the dynamics of macroeconomic indicators. For this purpose, Table 2 summarises current and future expected levels of some key economic indicators for Australia and other countries with a AAA rating.

Unlike Australia, the US and UK have been downgraded from AAA to AA+ by some ratings agencies, but they are included in this table for comparison, together with the averages of the group of major advanced economies.

Again, a note of caution is in order here since projections are continuously updated.

Table 2: Key economic indicators in Australia and other AAA countries. Units shown: ‘Growth’ is % change in real GDP; ‘Inflation’ is % change in consumer price index; ‘Unemployment rate’ is % of labour force; ‘Current account’ is % of GDP. Source: Author’s calculations based on data from the IMF, World Economic Outlook Database

With an average annual growth rate of GDP projected around 3% over the next five years, Australia is among the fastest growing economies of the group. This is true even when looking at the revised GDP growth figure announced by the Treasury (2.5% growth in 2013-14 and 3% from 2014-15 onwards)

Unemployment is lower in Australia than in most other AAA countries – and would continue to be even if it rises as forecast to 6.25% next year. Conversely, inflation is higher than in the other countries in the sample, including the UK and US, but still below 3%.

Australia’s current account balance is expected to deteriorate. This might reflect a number of factors: growing investment in the resource sector, increasing mining-related imports, and progressive normalisation of terms of trade and interest rates on external borrowing.

The data indicates that the Prime Minister’s statement about the debt position of Australia is correct. The economy is doing relatively well by international standards. The new information recently released by the Treasury depicts a somewhat softer short-term outlook, but it does not substantially change the overall positive assessment of Australian economic performance in the global context.

'This article is a fair and reasonable examination of the evidence. I think it provides a cogent assessment of the Prime Minister’s claim.'
~ Associate Professor Graham White, University of Sydney. 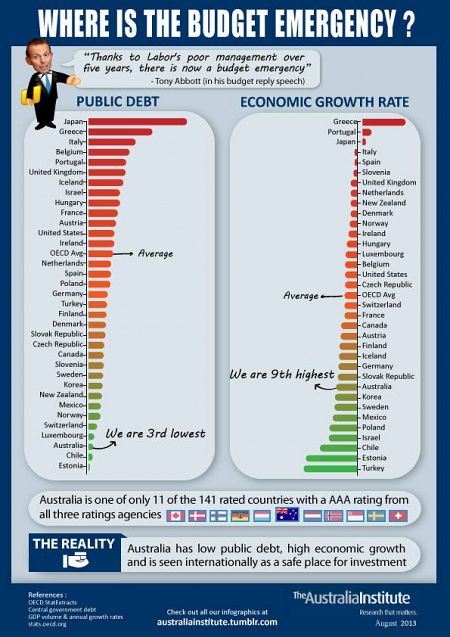 The Conversation is fact checking political statements in the lead-up to this year’s federal election. Statements are checked by an academic with expertise in the area. A second academic expert reviews an anonymous copy of the article. Request a check at checkit@theconversation.edu.au. Please include the statement you would like us to check, the date it was made, and a link if possible. This article was originally published at The Conversation. Read the original article.