The Commonwealth Ombudsman called for a review of hundreds of Prime Minister and Cabinet appointments, including those by Scott Morrison, over concerns key officials have been illegally appointed.

A secret report obtained by The Klaxon reveals that just months before the federal election the Commonwealth Ombudsman officially called for Morrison’s Prime Minister and Cabinet (PM&C) to conduct a review of all appointments over the past seven years.

The Ombudsman’s directive – the investigation itself was sparked by an illegal Morrison appointment – includes every appointment made by Morrison in his four-year term as Prime Minister.

The revelations come as the nation reels from news the former Prime Minister secretly appointed himself to five ministries, including Treasury and Finance.

Those secret appointments meant Morrison was in charge of each of the four departments and agencies that officially received the Ombudsman’s secret report.

The Ombudsman’s directive was the outcome of a secret investigation, concluded in December, into Morrison’s PM&C having illegally appointed a senior bureaucrat to two jobs at the same time.

Under Remuneration Tribunal law it is illegal for a full-time Federal Government employee to also be paid for any other government role.

As previously revealed, Chris Jose, a key executive of media regulator the Australian Communications and Media Authority (ACMA), had also been illegally paid as a part-time commissioner of the National Competition Council.

In its secret 41-page report, the Ombudsman says it uncovered a 'potential gap in the process' of senior official appointments and called for PM&C to conduct a “review” of all government 'officeholder' appointments 'over the last seven years'.

'This investigation…identified a potential gap in the process of appointing an individual to more than one position covered by the RT (Remuneration Tribunal) Act, and the risk of unidentified non-compliance with section 7(11) of the RT Act.'

Section 7(11) of the Remuneration Tribunal Act says it is illegal for a paid full-time Federal Government employee to also be paid for any other government roles.

The central concern of the Ombudsman is that other officeholders, like Jose, have also been illegally paid for two or more government jobs at the same time.

Hundreds, possibly over 1,000, key Federal Government appointments are among those in question.

The Ombudsman investigation called for Morrison’s PM&C to 'coordinate a review of appointments' to 'determine whether payments made to any individuals who held more than one position' were legal.

'PM&C [should] undertake and coordinate a review of appointments over the last 7 years to determine whether payments made to any individuals who held more than one position over the same period were consistent with sections 7(11) and 7(12A) of the RT Act.'

PM&C was then to report back regarding 'any other instances of non-compliance' and to inform the Ombudsman 'what (if any) action has been or will be taken'.

It appears the Morrison Government, defeated at May’s Federal Election, almost certainly did not undertake the review.

Morrison repeatedly declined to comment when contacted by The Klaxon. 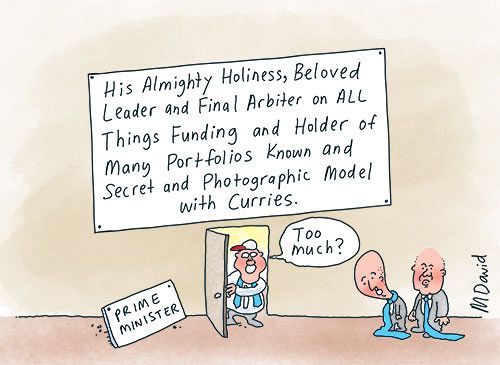 Morrison and the Murdoch bad guys

The Ombudsman said it was unable to comment, citing legislative restrictions.

A statement from the Ombudsman said.

'The Ombudsman and his staff are also bound by the secrecy provisions at s 65 of the Public Interest Disclosure Act 2013 (PID Act) which make it an offence to disclose information obtained in the course of a disclosure investigation or in connection with the performance of a function, or exercise of a power under the PID Act.'

Prime Minister Anthony Albanese has been approached for comment.

The PM&C is responsible for Federal Government “officeholder” appointments.

Officeholders are top public servants, including the heads and key members of federal agencies, whose pay is set by the Remuneration Tribunal.

There are around 230 full-time “officeholders” and many hundreds of part-time officeholders.

The Ombudsman report, with a header 'OFFICIAL: Sensitive Legal Privilege', says the timeline of the investigation, which began in January last year, was extended four times, in part due to the “complexity” of the matters.

It states PM&C refused to respond to some of the Ombudsman’s official inquiries.

The Ombudsman’s report states it was to be provided to the National Competition Council, PM&C, Treasury and Finance.

Last week it emerged Scott Morrison, between March 2020 and July 2021, secretly appointed himself to five ministries, including Treasury and Finance.

The National Competition Council (NCC) operates under the Treasury portfolio.

That means that on 2 December last year, when the secret Ombudsman investigation was finalised, Morrison was ultimately in charge of every department and agency it reported to.