Under their protocols, the Finance Department should have allowed Slipper to repay the modest $900 he owed them — but instead decided to crucify him. Margo Kingston reports. 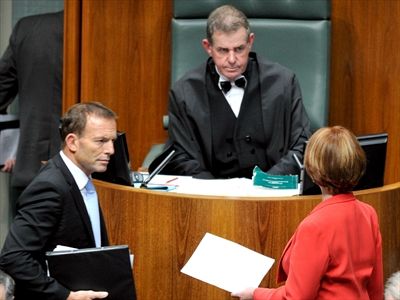 OH, THE IRONY of ironies.

James Ashby's false claims that Peter Slipper had rorted his taxi cab entitlements while Federal Parliamentary Speaker in 2011-12 have triggered a summons on three cab overpayments in 2010.

The history of Ashby's allegations is as follows: two claims of travel rorts were dropped  – after garnering maximum negative publicity for Slipper – while his last claim of sexual harassment was thrown out of the Federal Court in December as an abuse of process.

However, they began investigating Slipper's cab claims, going back a while, and finally came up with the three from 2010, which they summonsed him on this week.

Now, there is the Finance Department Protocol followed when an Allegation is Received of Alleged Misuse of Entitlement by a Member or Senator (the so-called Minchin Protocol, because the then Howard Government finance minister Nick Minchin decreed it) which says that when a politician claims too much for minor expenses (such as cab fares) then they just quietly repay the excess and all is forgiven.

• When an allegation of or other event which suggests misuse of entitlement occurs, the Department undertakes an internal investigation to ascertain whether the allegations are credible (rather than being only malicious or vexatious).

• If the matter is relatively minor, the Member or Senator will be invited to provide an explanation to the Department.

Sources have revealed exclusively to Independent Australia that, in accordance with this Protocol, when the 2010 overpayment (a mere $900 or so) was discovered several months ago, Peter Slipper immediately offered to repay the excess.

But sources say Finance refused to allow him to do this. Instead, they said that — because the AFP was interested, they would not follow the protocol.

Why did they make such an exception in Slipper’s case?

Many politicians and their staffers claim too much for their cab fares. There is an example below involving Coalition MP Sophie Mirabella.

All those pollies repay — and they don’t get referred to the police.

So, Finance has made an exception for Slipper, despite the fact that the AFP investigation began because of a false and malicious allegation by Ashby.

For simple fairness, Finance should now dump the protocol and refer all politicians who over claim for cabs – and who cannot show this was a simple error and not a try on – to police.

If Finance does not do this, they will have opened a powerful loophole in the Protocol, which invites another Ashby to destroy another political rival with false claims contained in a malicious court application.

A LIBERAL staffer who splurged $906 on a cab ride from Wodonga to Melbourne boasted on Facebook: "I don't do buses."

Adam Wyldeck, who works for Victorian Liberal MP Sophie Mirabella, provided taxi fare updates on Facebook as he travelled to the airport on Sunday.

"Not even in Melbourne yet and the cab fare is sitting at $756," he wrote.

After a Facebook friend asked whether he could have caught a bus, Mr Wyldeck replied: "I don't do buses."

He said he couldn't go by rail because "trains left way too early".

When people on Facebook questioned the trip as a blatant waste, Mr Wyldeck urged them not to make assumptions, but wrote "democracy isn't cheap".

Contacted by the Herald Sun, Mr Wyldeck said he had asked for an invoice of the Cabcharge voucher he used for the trip, because he planned to pay the fare.

"I will pay that, I have copped that one. There's no government expense," he told the Herald Sun.

"It was one of those cases where your travel arrangements change."

He said any "right-minded person" knew that a $906 fare was not an appropriate use of public money, and that he never had any intention of leaving taxpayers to pick up the tab.

He used Cabcharge because he didn't have the money at hand.

"There's no malice in anything there."

"If it was an instance where I had claimed it on government expenses then it would be a story," he said.

Under federal parliamentary rules, Mr Wyldeck is able to pay for travel to the airport in order to get to Canberra for sitting weeks.

Instead of a normal trip from Wodonga - flying from Albury to Sydney and then to Canberra - Mr Wyldeck travelled to Melbourne to do some work on the plane with Ms Mirabella.

Liberals said he had done nothing wrong and that he had indicated he would pay for the cab fare.

Editor's note: the cost of $900 reported is what IA understands to be the amount of the Slipper overpayment in question. The $1194 figure now reported in some news reports appears to be the total cost for the travel in question — wrongful and otherwise. See also Glenn Milne's report on how Tony Abbott flew all over the country at taxpayer's expense to promote his book 'Battlelines'.