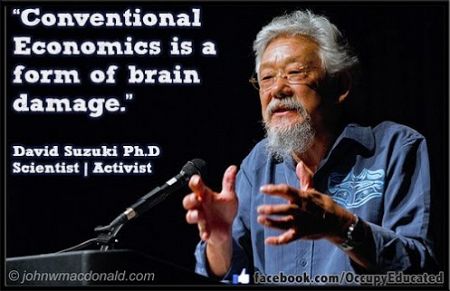 The Global Financial Crisis, the extreme inequality of wealth world-wide, the materialism of modern life and the dire state of the planet are not accidents, nor just unavoidable consequences of the nature of things. They are the result of the modern practice of economics, which makes elementary errors of accounting, evidence, perception and theory.

Many of these errors have been noted for decades, but only by a dissenting fringe of economists and informed others. Their message is drowned out by the relentless repetition of the mainstream free-market mantra. Though many people are uncomfortable with economists‘ pronouncements, and some are aware of some of the errors, few seem to realise how many and how basic are the errors, or how far-reaching are the consequences.

Here are some of the main errors, spelt out in simple terms.

1.  The measure of success is Gross Domestic Product.


Yet the GDP is simply the total of all activity involving money, with no account taken of whether the activity is useful, useless or harmful. The costs of disasters, pollution and “defensive expenditures”, like insurance, are all added to the GDP. A proper accounting would use a balance sheet and subtract the costs from the income, as every shopkeeper understands. As a result, unpaid activities like volunteer work, growing backyard vegetables or a mother’s loving care are neglected and implicitly discouraged, though they may contribute something like a third of net national benefit. Exploitative and polluting activities are implicitly encouraged because they boost GDP.


Growth, unemployment and inflation measures in the neoliberal era, since 1980, have never been as good as those in the 1950s and 1960s.  From 1953 to 1974 unemployment averaged 1.3% and inflation averaged 3.3%, and from 1960 to 1974 growth averaged 5.2%. If free-market fundamentalists were right, then the government “intervention” in the economy that was routine in the post-war era would have precluded such stellar performance.  In fact, such figures are now treated as impossible.

3. Money and debt are excluded from economic models.


Money is excluded because economists treat economic exchange as barter, claiming money is only a neutral intermediary. Debt is excluded because private debt is claimed to have little influence on economic performance.  Economists claim “one person’s debt is another person’s asset”, so net purchasing power is not changed by loans.  That would only be true in a barter economy, or if banks only loaned from savings deposits. Yet it is easily verifiable that banks create new money to make loans, so purchasing power is boosted and money is no longer neutral.  Because banks have been deregulated and the banks’ incentive is to increase debt, private debt has increased dramatically over recent decades. It was the collapse of a mortgage debt bubble in the US that triggered the GFC.  Their discounting of debt is why most economists failed to see the GFC coming, and have little idea how to recover from it, as they are demonstrating in Europe.


Modern free-market theory, called the neoclassical theory, predicts the economy will always be close to equilibrium. If that were true, it should tick along steadily and sudden changes should only occur in response to large external events like natural disasters or wars. Yet, many times over the past two centuries, financial markets have suddenly collapsed without any external cause. Some of the more recent examples occurred in 1987, 1997, 2001 and 2007. In 1987, stock prices dropped by 30-40% in a day, though thirty per cent of the world’s factories had not been bombed overnight.

The neoclassical theory is also based on assumptions that are patently absurd or clearly shown by other disciplines to be untrue.

5.  Guesses assumed to be accurate


Among the patently absurd, it is assumed our collective guesses about the future will be accurate — yet people in 1890 could not have conceived how cars, aeroplanes, two world wars, nuclear weapons, computers and digital communication would radically transform the world. 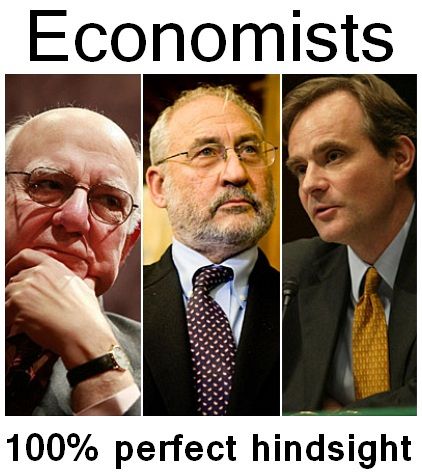 
It is assumed that people are innately individualistic, competitive and coldly “rational” calculators. However psychologists have clearly documented our tendency to favour cooperation by punishing cheaters, even at a personal cost.  Almost every mammalian species lives in groups, and social groups have an innate, and healthy, tension between individualism and cooperation. Most people understand they are better off if they balance their own wishes with those of their family and community. We are obviously strongly motivated by love, envy, fashion and insecurity, and marketers ruthlessly exploit these foibles. Psychologists have also clearly documented our tendency to other “non-rational” behaviours such as weighting a risk of losing more heavily than an equal chance of winning. Neither the fashion industry nor the marketing industry would exist if economists were right.


Economists assume there are no economies of scale beyond a point of diminishing returns, ignoring the lesson of Henry Ford’s assembly lines. Economies of scale allow the biggest firm to undercut other firms and grow faster, until it dominates a market. The existence of many such dominating firms, such as Microsoft, McDonald’s and Facebook, is also ignored. 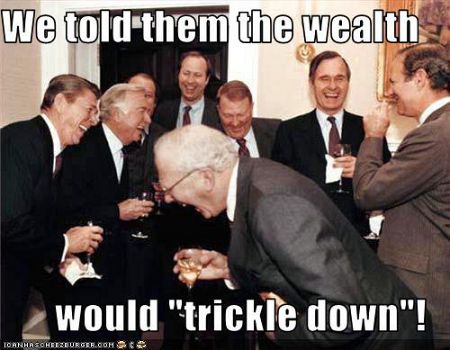 8.  Oblivious to the emergent wealth of land


Economists seem to be oblivious to the existence of emergent wealth of land.  This is the value that accrues to a plot when a neighbouring plot is developed. The additional value is due to the proximity of developments, and is additional to the individual invested values. It therefore belongs to no individual, because it is due to the local community of activities and therefore ought to accrue to the community as a whole. Yet this emergent value is allowed to be captured by individuals as unearned windfall profit, which is one of the major drivers of inequality. Worse, in combination with excessive credit creation by banks, this leads to land speculation, asset bubbles and financial crashes. This one error leads to individual injustice and systemic dysfunction.

The consequences of these errors are not trivial; they radically distort our perception of the behaviour of economies. Free-market theorists allow that there are “market imperfections”, but don’t appreciate that abandoning any of their central assumptions leads to radically different predictions of pervasive instability and unsteady behaviour.

If we use more defensible assumptions, we are led to expect a quite different kind of system, a complex self-organising system, that is always far from equilibrium. Such systems are neither static, nor so prone to dramatic booms and busts, and they are more like living systems, in being unpredictable in detail yet having a fairly clear general character. 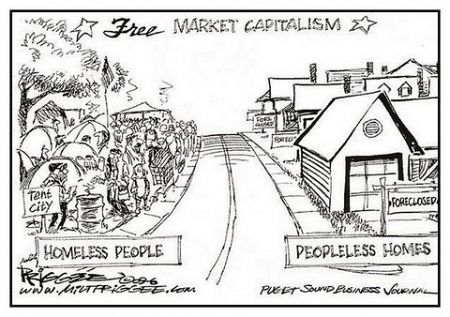 To be effective, economic management needs to recognise quite different points of intervention. Markets are indeed powerful, but they need to be carefully managed, because there is no assurance in either theory or practice that they automatically yield good outcomes.

This is not socialism, which is government ownership of large parts of the economy. Rather, it is the use of incentives, like taxes and subsidies, more coherently and with better understanding and a clearer purpose than we do now.

Government is the obvious means to effect this management.

There is also a case for “natural monopolies” to be returned to government ownership. The market-fundamentalist claim that government is always inefficient is clearly nonsense. Any large organisation is prone to inefficiencies, and plenty of private examples can be placed next to public examples. Try calling Telstra.

The subject of economics needs to be fundamentally re-thought. 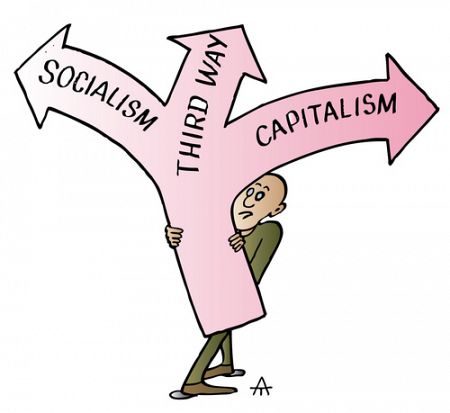 Free-market theorists think they are doing science because they use mathematics.  Yet to real scientists, mathematics is only a tool. The essence of science is the perception of patterns in the world, which are expressed as hypotheses, and the testing of the predictions of hypotheses against new observations of the world. The perception of a pattern is not a rational process, it is a creative process.  Mathematics is useful to draw out the implications of hypotheses after they have been conceived.

Economics got infatuated with the mathematical part of science and completely missed the testing part. The equilibrium prediction clearly fails the test of comparison to real economies, as the examples of market crashes and economies of scale show.  To continue with this failed theory is to practice pseudo-science.

The highly influential economist Milton Friedman even claimed that good theories can result from obviously wrong assumptions and that, in fact, the better the theory the more incorrect are its assumptions. Scientists can only be astonished by his confusion. Scientists do understand that every theory is only an approximation to observed reality, but the art of good science is to find theories that economically yield predictions that are usefully accurate over a broad range of conditions. Theories based on inappropriate or absurd assumptions can only have superficial or limited coincidental resemblances to reality, as further investigation will reveal.

A new conception of economic behaviour based on complex systems is developing rapidly on the fringes of economics.  Many useful detailed insights are recounted in Eric Beinhocker’s book The Origin of Wealth (Harvard Business School, 2006). There are also immediate overarching implications. For example, there is not just one way to organise economies, there are many ways, and they can be tailored to the wishes of each human culture.

Through these new ideas, economies can be made more humane and less destructive. They can be returned to their proper place, which is subordinate to social policy. They can even be made compatible with the living world, upon whose health our survival totally depends.

The larger implications are developed in my eBook The Nature of the Beast.

(You can read more by Dr Geoff Davies on his blog Better Nature. Read also managing editor David Donovan’s 5-part series — 'Why everything you thought you knew about economics is probably wrong'.)