Opposition Leader Peter Dutton was featured on Four Corners this week to show ABC viewers the “full picture” of who he really is.

In this article from 2019, Ross Jones highlighted one of the more damning scandals tarnishing Dutton's name.

JUST A COUPLE OF DAYS AGO, an article was published on Medium that accused Home Affairs Minister Peter Dutton of being on the take.

It named names but was itself unattributed.

Which, if you ask us, is wrong. If you are going to accuse a high government official of accepting an $80K sling from a convicted drug dealer to reverse their deportation order, you need to back it up and put your name to it, cite sources, prove your case.

Then again, if you are the Minister for Home Affairs you might think about putting up at least a token defence — “It's bullshit, I’ll sue, I demand an immediate retraction”, or something of the sort.

This article, which unequivocally accuses Spud of being in league with criminals and being outright corrupt, has no byline or attribution.

IA emailed Medium at the only email address we could find on the site, asking if the author could maybe contact us. It bounced.

A message that you sent could not be delivered to one or more of its recipients. This is a permanent error. The following address(es) failed:

But IA does not, sadly, possess the sweeping powers available to Tuber. Dutton is arguably the most powerful man in Australia, with oversight of ASIO, the Australian Federal Police and Border Force.

In other words, if Dutton wants to find you, he can.

If a fraction of this (alleged corruption) is true re Dutton, its explosive: I advise caution. It’s why we MUST have an INDEPENDENT FedICAC

A quick Google search of a few relevant terms in the article consistently throws up the same search result header:

There it is, glaring all over the 'net — lurid allegations for all to see.

Dutton, who has a reputation as one of the thinner-skinned potato varieties, has seemingly taken no action despite the ease with which he could squash this bug.

The obvious question is, why not?

The answer that first springs to mind is that maybe the story has a few grains of truth and that given the upcoming election, where according to Sportsbet the Rhizome is a $3 outsider to Labor’s $1.33, the last thing he wants is ‘Dutton's Secret Drug Cartel Connection: The William Betham Case’ splashed over the MSM.

IA requested a comment from Dutton’s office but has not yet received a response.

Maybe it's politic to be quiet, just this once. 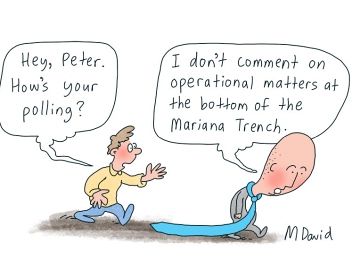 Since IA first published this article, we have identified and spoken with the author of the original Medium story. The author is currently in an Australian detention centre.

In our conversation, the author insisted the article is fact and stated it was written in the belief that every Australian needs to know the depth of corruption in the system.

The author presented as genuine and straightforward. IA is yet to independently verify any of the allegations made. Enquiries are continuing.

https://t.co/Ejf0q9guT5
This medium story is a must read - @SarahRubyWrites has confirmed the details as accurate with information she has previously been given.
The question: Is Dutton's office a hot bed of corruption & proof of the urgent need for Federal #ICAC? #auspol