Don't like the budget? Your options aren't limited to voting

MAY 13 saw the Coalition hand down its first budget. The response since has been one long story of protest and opposition. Even State Premiers have banded together to reject the proposed changes.

It's now looking likely that Premiers will ask Senators to staunchly oppose the bill.

The budget, it's been argued, is heavy-handed, unjust and illogical. Most Australians don't want the budget to pass in its current form. Nor do a number of elected representatives, including several Liberal MPs.

There are at least two approaches.

The first is from ‘within’ the system and the second is from ‘without’ the system. In the past week or so, Australians have already shown their resolve on both fronts. Yet if we want to pressure the government to change their path, more Australians still need to act. 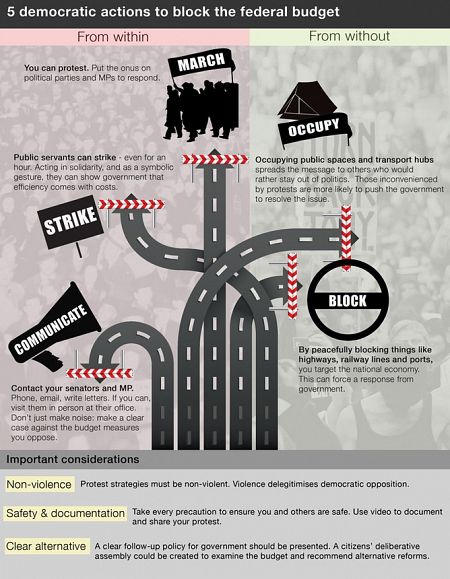 Blocking the budget from within

One key form of action is hardly new: communicate directly with MPs and Senators. The aim here is to petition federal representatives (Liberal, Labor, National, Green, PUP, independents, and so on) to maintain their political opposition on your behalf.

Contacting Senators is particularly important since the government lacks a majority in the upper house.  Email them. Send them tweets, Facebook posts or even snail mail. If you can, try to visit them in person at their office. Don’t just make noise: make a clear case against the budget.

You can protest. But protesting from within means that you must be ready to back up your revolt with a plan for a positive alternative. Direct your displeasure at government legitimately; make it difficult for your representative to dismiss you as just another protester. Here, it's not just citizens who need to act. Political parties and parliamentarians must be ready to respond.

We saw what shape this type of action can take recently when tens of thousands took to city streets across the country to protest against the proposed budget. The so-called March in May rallies united people from all cross-sections of society left disenchanted with their government's plan for their future.

Flw @vanbadham Miss the #marchinmay to #bustthebudget? Here is the Sydney May 18 demo in 15 sweet minutes! https://t.co/OguTFI8DW3 …

But this was not just any protest. It wasn't just rants and marches. Political parties, such as the Greens, were also out in force and they’re asking for people to share their stories and proposals. They want everyday perspectives to bring back to Canberra. This is the type of representative politics we need — the type that depends on our active participation.

Public servants, many of whom may soon face the axe, can also play a role from within. Before departments close and the projected 16,500 public servants are forced from their jobs, they can strike —  even for an hour. In solidarity with colleagues, and as a symbolic gesture, public servants can show government that efficiency comes with costs.

Try running a government, even for an hour, with insufficient staff and see what happens. Sometimes, you just can't do more with less. It's not just about economic benefits. It's not even about a 'smaller, less interfering government’, as Joe Hockey put it. It's about the public and how they'll no longer be served by the government that's supposedly there to represent them.

Blocking the budget from without

The other form of action – which can overlap with the first – is often advocated by those outside formal political institutions. This form of action is about peacefully disrupting the continuity of everyday life. It's about challenging the system until the government gives in or a new election is called.

The indigenous Idle No More movement in Canada serves as an instructive example. Protests, marches, sit-ins, boycotts, and the like can be headline grabbing. But how often do they truly impact the decisions of leaders? Protest is easily dismissed or, worse still, condemned.

Take the recent demonstration on Q&A for example. Not only were the students dismissed by Education Minister, Christopher Pyne, they were condemned by host, Tony Jones, who chided:

“That is not what democracy is all about and those students should understand that.”

But what Idle No More does so well in the Canadian context is to protest where it matters. By peacefully blocking things like major highways, commercial railway lines (a useful technique for protesters in country Australia) and the gates of major ports, they target the national economy. They force a response from government. In Canada, the government has responded and even entered into dialogue with the movement.

For those not able or inclined to challenge the budget from within, this may be your route. For those who feel un-represented by political parties – even minor parties like the Greens or PUP – there is no need to speak truth to power through an intermediary. You can stand together as citizens and associations. 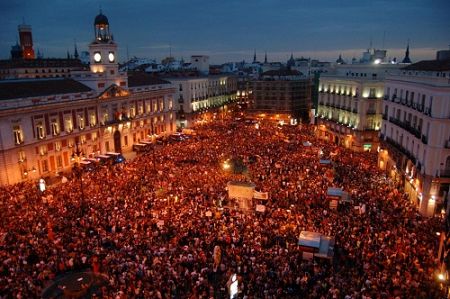 Some of the techniques used recently in Thailand, or during the height of the Occupy/Indignados Movements are also helpful. Peacefully and consistently blocking busy inner-city roads and the entrances to train stations, ferries, and airports has the effect of annoying others that would rather stay out of politics. It spreads the message through irritation as those inconvenienced by the protest are more likely to petition the government to resolve the issue.

Of course, state response to peaceful mass protest has the unfortunate tendency to turn violent. Rather than dialogue with demonstrators, governments have a habit of shutting down rallies and evicting occupiers. Just last week, students protesting the proposed changes to higher education as part of the budget initiatives were dragged from the streets by police.

Still, this is no reason not to try. Remember: in many other democracies, it's not uncommon to occupy public spaces for prolonged periods of time. It shouldn't be in ours either.

Putting the two together

Combining strategies from within and without will weaken the government’s resolve and strengthen the opposition case. But there are provisos. Both strategies need to be performed non-violently. Violence de-legitimises democratic opposition. Both strategies must have the same goal in this instance: block the budget by putting forward a more just and measured alternative.

There should also be a clear follow-up policy for the government. Following the world's first Citizens Parliament run in Australia more than 5 years ago, we would recommend that a citizens’ deliberative assembly be created to thoroughly investigate the budget. Economic reforms should then be made in line with the assembly’s recommendations. 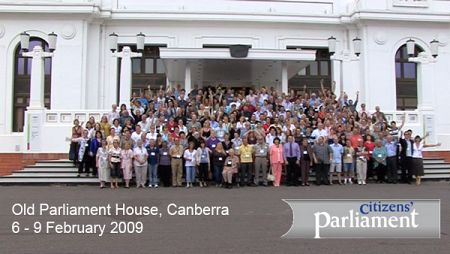 In an age brimming with democratic innovations, it's a shame that a government can ask a panel composed of people with possible conflicts of interest to review an entire country’s budget. It's appalling that a government can use dodgy numbers to breed uncertainty and fear in the electorate.

Australians should be thinking seriously about how we got ourselves into this situation in the first place.

Don't like the budget? Your options aren't limited to voting

30 May 2014, 7:30am Democratic theorists, Jean-Paul Gagnon and Mark Chou, have come up with two peac ...
Join the conversation
comments powered by Disqus
News updates