Did George W Bush leave the US financially and morally bankrupt?

Many people seem to forget that before Barack Obama there was George W Bush, who crippled the American economy through two senseless foreign invasions and, because of poor regulation in the banking industry, led the world into a devastating global recession. Dave Johnson from See The Forest asks, is there any hope left now for the once mighty United States. 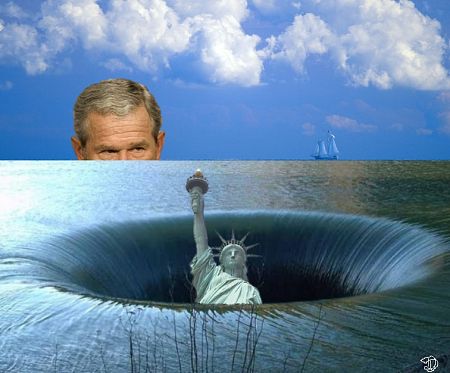 When you sell the farm, the farm's gone.

Is it already too late for America? I'm starting to think that the anti-tax, anti-government conservative movement that started in the mid-70s, elected Reagan and led to the terrible Bush Presidency may have effectively destroyed the country, leaving it bankrupt, corrupt, ungovernable, ruled by a wealthy elite -- and we're only now just starting to realize it. To cover tax cuts we stopped maintaining the infrastructure and started borrowing. To satisfy their hatred of government we increasingly stripped away rule of law, regulation, and belief in one-person-one-vote. We are seeing the consequences of all of that coming back to roost now.

Reagan left us with massive debt and ever-increasing interest payments. Bush left us with $1.3 trillion deficits and a destroyed economy that would force further increases in the borrowing for years - to be blamed on Obama. The "free marketers" gave away our manufacturing base that will take decades and massive capital investment to recover. Obama can try, but it may just be too late to do anything about the borrowing. We need massive investment in jobs and infrastructure, and a national economic/industrial plan. But, with their own Reagan/Bush debt as ammunition, conservative ideologues continue to block every effort at investment to get out of the mess we are in.

The conservatives destroyed the regulatory structure of the government. They removed the inspectors, administrators, regulators and replaced them with corrupt cronies.

The conservatives killed off, contracted out or sold off - "privatized" - so much of our in-common resources and heritage of public structures. Water systems, oil and mineral leases, government functions, elements of the military, etc.

The conservatives destroyed the rule of law, leaving behind public perception of rule by cronyism, favoritism and mob.

The conservatives destroyed public understanding of democracy, leaving behind a one-dollar-one-vote system that their Supreme Court just formalized, along with a corporate media that works to keep people uninformed. And to make matters worse, now the telecoms can argue before Federalist Society judges that their "speech rights" are violated by rules making them carry labor and progressive websites over the internet lines they control. And forget about the idea of them ever letting anti-corporate-rule candidates raise money on "their" internet.

I hate to reference Friedman but this from last week has been sticking in my mind. He says the world is looking at the mess in the US and is turning away from democracy as a result.


[Foreigners] look at America and see a president elected by a solid majority, coming into office riding a wave of optimism, controlling both the House and the Senate. Yet, a year later, he can’t win passage of his top legislative priority: health care.

"Our two-party political system is broken just when everything needs major repair, not minor repair," said ... who is attending the forum. "I am talking about health care, infrastructure, education, energy. We are the ones who need a Marshall Plan now."

The Beijing Consensus, ... is a "Confucian-Communist-Capitalist" hybrid under the umbrella of a one-party state, with a lot of government guidance, strictly controlled capital markets and an authoritarian decision-making process that is capable of making tough choices and long-term investments, without having to heed daily public polls.

It is too late to recover?

Accountability is a first step. If the current administration would hold the corrupt actors accountable, maybe we could begin to restore governance. And the public would know who to blame for what has happened to us, enabling them to support policies that will get us out of this. But so far they won't. If they won't even investigate torture and illegally invading a country why should we expect any accountability for the financial collapse, corrupt government contracts, bribery, embezzlement, corruption and other crimes of the Bush era?

More equitable distribution of the fruits of our economy is another step. Our system worked so much better back when the top tax rate was 90%. The returns from our investment in infrastructure were more widely shared. And back when it took many years to build a fortune businesses had an interdependence with their communities. Executives needed the schools and roads and other public structures functioning well. They needed long-range business and community planning. But just imagine trying to do something about the concentration of wealth today.

So where do we go from here. Is democracy over? Is rule of law a thing of the past? Is predatory monopoly control by the largest corporations the way things are and will be? Does the world now move to governance by a wealthy elite?

Or is the winter and the rain and the snow just getting to me?


(This story was published on Truthout on Monday 1 August, 2011 under the title 'Did Bush leave the US bankrupt and ungovernable?' and has been republished with permission.)