Democracy for sale: Will new push for donations reform force Turnbull to act?

With Labor, the Greens and cross benchers pushing for political donation reform, will Turnbull finally show some leadership? ANU's Marian Sawer provides us with chapter and verse on the history of the Coalition's refusal to act bilaterally on this issue

"This is a big, big, moral issue. I would love to see a day when only individuals on the electoral role were able to give money to political parties with an annual cap". ]

SINCE THE 1980s, Australia has become known for its laissez-faire or lackadaisical attitude to the role of money in politics. At the fFederal level, Australia introduced public funding for political parties to reduce reliance on private donations but corporate donations have continued to grow — reaching $202 million in 2013–14.

Disclosure to the Australian Electoral Commission is required for donations of over $13,200 but there are no source restrictions or limits for donations.

So we have the situation where companies seeking access to government and favourable treatment of bids for contracts or licenses are quite lawfully making large donations to political parties. Australia’s political finance regulation falls way behind international standards, as can be seen in the global database maintained by the Institutional Institute for Democracy and Electoral Assistance (IDEA).

To take just the issue currently in the headlines, Australia has not even taken the step of banning donations from foreign interests, unlike 114 other democracies. See IDEA's Political finance bans and limits here.

The following is the list of questions you can ask about Australia and compare with other countries: 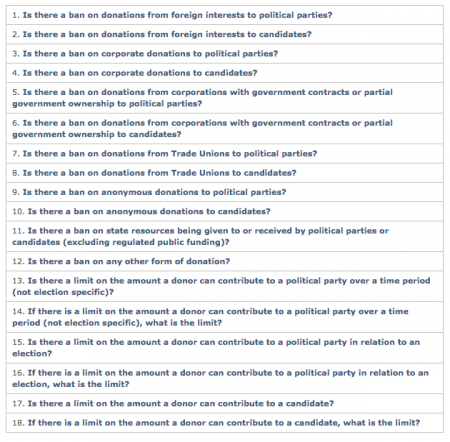 IDEA's Political finance bans and limits list of questions to asist your research and comparisons.

@Jarrapin @bensab3 @crikey_news Easy to report on this stuff, but is Press Gallery/7/9/Murdoch & Fairfax going to pursue this like Dastyari?

Recent media emphasis has been on Chinese companies – currently the largest foreign donors to Australian political parties – but the problem is much broader.

At the Federal level, momentum for reform was lost after the departure of Senator John Faulkner from the special minister of state portfolio. Great expectations were raised by his 2008 Electoral Reform Green Paper on Donations, Funding and Expenditure.

However, "the minister for democracy" was up against Labor state premiers, who had been successfully raising large sums of money from corporate Australia and were opposed to the kind of donation and spending caps found in comparable democracies. Senator Faulkner attempted more modest reforms to at least improve the disclosure regime for political donations. His 2009 Bill would have banned "gifts of foreign property", lowered the disclosure threshold for political donations to $1,000, closed the loophole whereby different branches of a party were treated as separate entities and made disclosure more timely. Even this bill was defeated in the Senate when Family First Senator Steve Fielding joined the Coalition to vote it down.

The Coalition has generally opposed tightening up the disclosure regime, on the grounds that greater transparency would be more likely to deter Coalition than Labor donors.

In 2013, another attempt was made to improve the disclosure regime with a compromise bill agreed by both Labor and Opposition. It was abandoned after public outcry over provisions that would have substantially increased "administrative" funding for parties to compensate for the costs of disclosure.

Senator Nick Xenophon also objected that the proposed increase in public funding was not accompanied by any caps on corporate or union donations:

"You can’t have your snout in the public trough and then [be] getting huge donations from the corporate and union sector".

While recurring scandals at the state level have led to a patchwork of significant reforms, including caps on donations and expenditure, loopholes are created by the lack of national regulation.

The NSW Premier Mike Baird has tried to get a national system of political donations laws onto the COAG agenda but, so far, without success. Perhaps the current chorus of Liberal politicians calling for it will strengthen his hand. They include former Federal treasurer of the Liberal Party Michael Yabsley, who has said that in terms of the health of democracy it would be better to go back to the sausage sizzle.

In NSW, there are donation and expenditure caps as well as bans on donations from property developers and the alcohol, tobacco and gambling industries. But in the 2011 State election, the NSW ban on developer donations was evaded by use of a fundraising entity with an ACT address — the Free Enterprise Foundation.

Brickworks pay out!? Paid more money to the Libs and Free Enterprise Foundation than in tax #4corners #ausvotes pic.twitter.com/MZQHWS2cQX

Some have argued that any thorough-going political finance reform will run up against the implied freedom of political communication in the Australian Constitution. However, in 2015, a challenge made to the NSW political finance regime on this ground was rejected by the High Court. Former Newcastle mayor and property developer Jeff McCloy brought the case. ICAC had found that McCloy had made unlawful donations to Liberal Party candidates (indeed, he described himself as a "walking ATM").

The High Court rejected this view. In fact, it strongly asserted that "guaranteeing the ability of a few to make large political donations in order to secure access to those in power" was antithetical to the underlying constitutional principle of political equality.

This is similar to the arguments made by the Canadian Supreme Court (in Harper v Canada 2004) that some restrictions on the freedom of political communication are needed to ensure equal opportunity for participation in political discourse and to prevent wealthy voices from drowning out others.

Unlike similar democracies, at the Federal level, Australia neither limits political donations nor campaign expenditure by political parties or third parties.

ALP has committed to banning foreign political donations. LNP is aggressively defending the practice. We get to vote on it in < 3 years.

The aims of such political finance regulation are twofold: first to ensure the integrity of elections; and, second, to promote a level playing field for electoral competition. Both aims are equally important. To safeguard integrity, there needs to be transparency and other measures so that those with a vested interest in government contracts or regulation cannot buy access and influence.

Managing director Luca Belgiorno-Nettis told Four Corners in May 2016 that Transfield’s large political donations had undoubtedly given it the ability to negotiate with its "political masters" for favourable contracts, such as that for the Sydney Harbour Tunnel.

The second reason for regulating political donations – the reason endorsed by the High Court in McCloy – is to promote political equality — a defining feature of democratic citizenship. Parties without wealthy backers should have equal opportunity to get their message out to the community. Moreover, corporate donors should not be able to purchase political access far in excess of that enjoyed by other citizens.

A third reason for regulating donations is so that those elected as political representatives do not instead spend their time chasing political donations.

All parts of Australia’s political finance need to become more transparent — those concerning public as well as private money. See 'Inside Story: Democratic by name, secretive by nature'.

Yet reform must begin somewhere and the stars seem better aligned in 2016 than they have been for some time. The distrust of the major political parties, which has led to a record number of Senate crossbenchers, could become yet another argument for reducing the role of money in our electoral politics.

Marian Sawer is emeritus professor and public policy fellow at the School of Politics and International Relations, ANU. She is editor of International Political Science Review. This article was published on John Menadue's blog 'Pearls and Irritations' on 7 September 2016. It is republished with permission.

Support independent journalism. Subscribe to IA for just $5 a month (or less).