Democracy for sale on penalty rates?

Who really controls Canberra’s levers of power when it comes to scrapping weekend and holiday penalty rates? As the Fair Work Commission considers submissions on penalty rates following a concerted campaign by Australian business, Peter Wicks follows the money trail.

IF YOU are one of the hundreds of thousands of workers returning to work from holidays this week, here's a couple of questions.

What price do you put on your weekend and holidays?

What price do you put on your kids' future?

There are some within our community that put a very small price-tag on your time and family. These people not only put a low value on these things that are so important to us all, they are intent on devaluing it even further.

The people I’m referring to are those pushing the Abbott government to scrap penalty rates.

For some struggling families, penalty rates provide a means of keeping a roof over their head and putting food on the table each day. With the cost of living skyrocketing, many parents, particularly single parents burdened with single incomes and the high cost of child care, are finding themselves forced into the position of having to work overtime just to make ends meet.

Under an Abbott government that was supposed to create a million new jobs, we are, instead, facing record unemployment rates. We haven’t come close to these figures since the last Coalition government when Abbott was Employment Minister. It’s a crisis that seems to be worsening.

However underemployment is also a huge issue. People are forced into casual positions by employers trying to maximise profits by cutting down costs like sick leave, holiday leave and long service leave.

Those who are seeking to scrap penalty rates want us to believe that doing so would solve the unemployment crisis.

Another thing that will undoubtedly skyrocket if the Coalition have their way is university fees.

Those students who don’t have Daddy’s trust fund to pay tertiary education costs not covered by Austudy or Youth Allowance usually meet these costs by taking up casual employment be it in a factory, hotel, restaurant, or supermarket.

Any changes to the penalty rates will have an immediate impact on the ability of tens of thousands of students to study as food and rent will become understandable priorities rather than time needed for study.

So who wants these changes to the penalty rates then?

Unsurprisingly, according to a recent Fairfax report, leading the charge are some of the Liberal Party’s biggest supporters.

The Abbott government has launched a review of current industrial relations policy via the Productivity Commission, despite WorkChoices being “dead, buried and cremated”.

Brickworks Ltd Managing Director, Lindsay Partridge, was apparently keen to let FWC know how tough it is having to pay penalty rates and continue to compete with overseas companies in the masonry industry. Maybe those companies he competes with don’t donate hundreds of thousands of dollars to political parties. Rather than paying workers a decent wage, Partridge seems more intent on sending rivers of gravy and cash to Liberal Party coffers.

Abbott showed his support by doing a presser at the Brickworks factory, and emails showed Peta Credlin seeking to use Parliament to showcase Brickwork’s case against the carbon tax. Manchurian Candidate anyone?

Those familiar with the Independent Commission against Corruption (ICAC) hearings in NSW may recognise Partridge and Brickworks from the allegations of illegal political donations to the NSW Liberals being funnelled and laundered through the Liberal Party national office.

Another company name familiar to those following ICAC is the Australian Hotels Association (AHA).

AHA has also made a submission to FWC on penalty rates. The association acts on behalf of hotels around the country, who clearly have to pay penalty rates to service staff.

A massive owner of these hotels is Woolworths who likes to sponsor political events and donate items for auction as they did at the infamous function where Alan Jones made a disgraceful reference to Julia Gillard’s father. Woolworths is one of the largest owners of poker machines in Australia, an industry that relies on problem gambling and the disposable income that penalty rates provide. 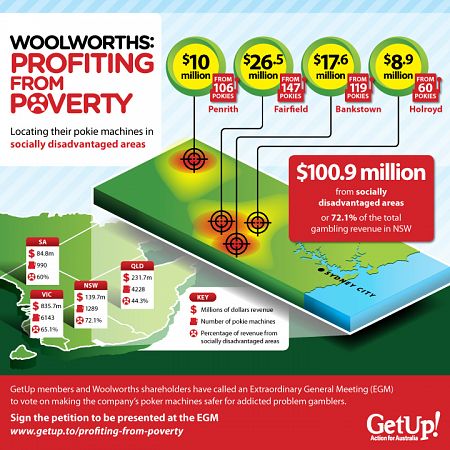 Coincidentally the Former NSW Chief Of The Australian Hotels Association was none other than Paul Nicolaou who also headed the Millennium Forum, the Liberal Party’s fund raising arm.

Nicolaou was dragged in and out of ICAC repeatedly as a key figure in the alleged laundering of illegal donations to the NSW Liberal Party that saw ten Liberal MPs resign from the Party. He was the sender of the $3,000 bottle of wine that finally saw a sitting Liberal Premier, Barry O’Farrell, fall on his sword and stand down after one too many ICAC revelations.

Another employer named as making a submission against the struggling workers’ penalty rates is Clubs Australia.

Things weren’t so tough for Clubs Australia that they couldn’t find around $20 million to fund a lengthy campaign against changes to laws regarding poker machines. This campaign was run against the Labor Party and saw sitting MPs attacked in personal campaigns in pubs and clubs in their own electorate.

I don’t suppose the Liberals owe these guys any favors?

Are we starting to see a pattern emerging yet?

Any attempt to change penalty rates to punish the worker and add millions to the coffers of big business must be fought at all costs.

When Minister for Employment, Senator Eric Abetz, stands in front of a press conference with Tony Abbott and maybe “Sloppy” Joe to explain what the Fair Work Commission and the Productivity Commission have determined, bear this in mind. The response will not be about lifting employment levels, helping business or removing shackles from the economy or any of the other spin they try to convince us with.

This will be about paying back the friends who funded their election campaign.

Peter Wicks is a Labor Party member and a former NSW ALP state candidate. You can follow Peter Wicks on Twitter @madwixxy.