Tess Lawrence believes Julia Gillard’s victory yesterday in the spill that wasn’t was not even pyrrhic and her use-by-date has simply been compounded.

She has been for months; you may have noticed the diminishing herd of sycophants in the room.

It's over for Primed Minister Julia Gillard; her use-by date compounded at yesterday afternoon's spill, when Caucus restored the incrementally losing team of Gillard and her Deputy and Treasurer, Wayne Swan.

It was not even a pyrrhic victory for the Leader and the Swan, given neither were challenged.

In an exquisite act of political sophistry and strategic cunning, the people's favourite, Kevin Rudd, declared he would honour his mantra promise and not contest the leadership unless he was forearmed with the majority support of his colleagues.

He will make caucus woo him; beg even. Besides, Gillard is leading herself to the political gallows. Why halt her stride?

By declaring he will not break his promise, Rudd has cleverly implicated a Prime Minister who is notorious for breaking her promise.

He has nothing to lose by holding out until polls barely register a heartbeat for Gillard, or when Labor loses the September 14 Federal election, as it is now poised to do.

It should be noted that Gillard's leadership was not in any way tested yesterday; because her nemesis did not seek to jeopardise or barter his future aspirations by responding to the strings hurriedly pulled by others.

Further, this was a caucus and in-house vote and, once again, Australians are being presided over by a prime minister for whom we did not unanimously vote.

In no way does the vote signify the wishes of the people. Nor does it signify that Julia Gillard or the ALP enjoys our confidence.

The Labor Party has long squandered its relevance.

It has lost the affection of the people who were once its core family. In all the rhetoric of today's activities, the talk was about 'the Party'.

Any concern for 'the people' and governance disappeared — missing in action. Then again, it has been AWOL for some time and such considerations have become strangers to us, in this Parliament.

It seems to have escaped the notice of most analysts that, for several years, the Labor Party's intent  on supa-gluing itself to power has been largely writ on extolling not the Gillard Government's virtues and merit, but by constantly training its guns on the 32nd Leader of the Opposition, Anthony John Abbott.

It is facile and inept campaigning and has proved a monumental failure.

In their desperation, they have only served to provide Abbott with electoral oxygen and enabled him to publicly refute histrionic and hypocritical assertions.

Gillard and Labor continue to run a fear and smear campaign against an Abbott-led Government.  But it ain't working. It has clearly backfired into driving voters towards Abbott — not from him. 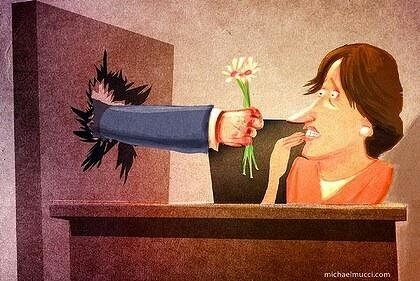 Australians already know what life is like under a Gillard-led Government. Enough said.

The more Gillard and her coterie lambast and single out Abbott with nonsensical claims of misogyny whilst ignoring sexist and derogatory remarks by their own members and supporters, the more their campaign blooding started to clot.

Their campaign does not present a contest of ideas or ideology. What it has done is whittle the contest down to this: in the red corner is Julia Gillard and the Labor Party.

In the blue corner is… Tony Abbott.

Yesterday was yet another ignominious day for the Australia Labor Party.

And Julia Gillard is still a dead woman walking.