Daily Telegraph bashes bible-basher bashers up Hillsong and down dale

According to the Daily Telegraph, sledging Scott Morrison's odd Pentecostal faith is entirely off-limits. Sydney bureau chief Ross Jones says this is rather rich, particularly coming from them.

On Thursday morning, 30 August 2018, Murdoch readers had to cop the following dramatic info with their breakfast of choice:

THE ABC OF BAD FAITH 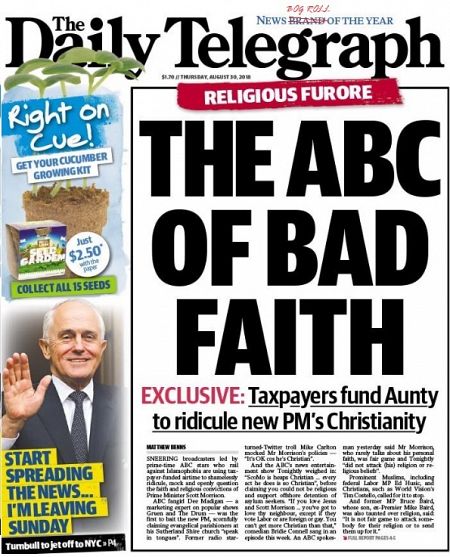 God! What happened? A furore you say?

Scott is a member of the Horizon Church, located in Sutherland Shire in Southern Sydney. "The Shire" is a bit like the rest of Sydney was in 1964.

Horizon is a Pentacostalist outfit aligned with Hillsong and sharing its values of personal worth.

The first lefty mentioned in the Tele’s story was ‘ABC fangirl Dee Madigan’. Madigan, who is a successful independent business owner and occasional ABC guest, would be flattered I’m sure to be considered an ABC star — up there with Leigh Sales perhaps.

Next mention was Mike Carlton, who I don’t think has been on any media to talk about anything but naval battles since Scotty was in pre-church.

The Tele’s big indignation was reserved for (recently cancelled) ABC comedy show Tonightly — specifically a set by comedians Bridie Connell and Wyatt Nixon-Lloyd pointing out in song some of the obvious moral dilemmas faced by today’s LNP vanguard.

Some Australians are confused about @ScottMorrisonMP’s evangelical faith and the role it plays in his politics. Christian rock duo #TheShadowMinisters explain through song #Tonightly pic.twitter.com/ISMnRxEekL

That’s ‘Aunty’s left mob’ as per the Tele. Best it can do.

This piece can be seen as just another Murdoch fake news story in the great tradition of the "flying rabbit":

Or it can be seen in a more sinister light — an attempt by Murdoch to stop Christians voting Labor by lying to them in 60pt bold type. Make Christians feel persecuted by smart-arses, just like they were in the Roman days.

Feed them to Dee Madigan!

In truth, no-one mocked Christianity, the ABC lefty mob simply pointed out that the tithe-paying cult of Pentacostalism is a weird thing to believe. Especially the tongues bit.

But some Christians got the joke:

'Despite some swearing and misuse of Jesus’s name, we found the song quite amusing. The lyrics are sharp, boppy and pointed. “We love Jesus, Jesus, but not refugees-us; if you want to win votes then you’ve got to stop boats.” Ouch. Also, the delivery is spot on and the timeliness of the material lends additional punch. “So don’t cross our border, even if you walk on water …”'

On 28 August, just two days before the Tele’s 'RELIGIOUS FURORE' tripe was published, the paper published:

Their worry is that the Pentecostal devotee, who attends a congregation where worshippers can be so overcome they start to speak in tongues, has a brand of faith that could become unpalatable for the mainstream public.

The News/LNP machine had kicked into gear straight after the spill. The 26 August issue of the Sunday Telegraph ran several fan-club stories trying to humanise the coal-toting tongue-speaker from the Shire.

One story, headed 'Welcome to ScoMo Town', purported to be a series of interviews with locals about just what a good bloke Scotty is. Down to earth too.

Not getting blow drys seems a pretty low benchmark of being an ‘ordinary bloke’.

And maybe I’m dadding wrong, but dry cleaning isn’t a regular thing for my daughter... pic.twitter.com/PPu9nSLyk3

His hairdresser apparently said he "is not vain at all":

For that money I’d want milk.

But it seems the Pentacost jibes might be testing ScoMo’s patience.

The person who wrote the copy for the article was a chap called Matthew Benns. Matthew is apparently the Daily Telegraph's "editor-at-large".

In his LinkedIn profile, Matthew reckons he was a Fairfax journo from 1999 to 2010, so he might have been around in 2010 when his current expense account published this: 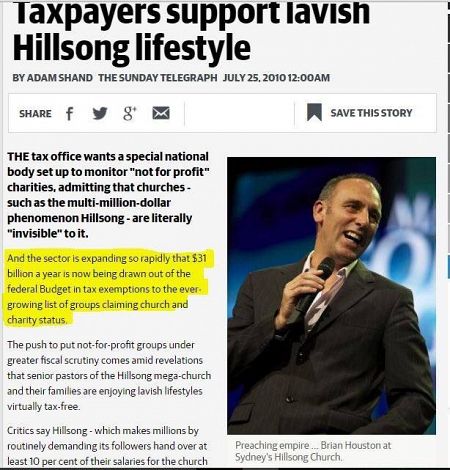 The same day @dailytelegraph leads with a headline "The ABC Of Bad Faith" they shamelessly repost a clip of #YouCantAskThat - which devoted a 30min episode to genuinely trying to understand priests, religion & christianity - without crediting the source @ABCTV. Bad faith indeed! pic.twitter.com/X8bbS3IZgE