Counting the cost of the Coalition (Part 1): A nation's loss

The last four Federal budgets left Australia poorer — not much is new in 2018. Alan Austin reports on the nation’s debt and deficit figures.

EACH OF THE LAST four Federal budgets has left Australia poorer than before.

Unfortunately, this one – the third from Prime Minister Malcolm Turnbull and Treasurer Scott Morrison, and the Coalition’s fifth – continues that trajectory.

This week’s Budget confirms yet another deep deficit. It also enables us to calculate the actual loss to the nation under the Coalition. So far.

This could be grim reading. But the numbers are irrefutable and the conclusions compelling. So stay with us.

Through the Global Financial Crisis (GFC), Australia had the world’s strongest overall economy. It was the clear stand-out among the 35 wealthy capitalist economies comprising the Organisation for Economic Cooperation and Development (OECD).

The average annual growth in gross domestic product (GDP) for all OECD members in 2011 was a dismal 1.7%. Six countries were in recession that year — Greece, Italy, Portugal, Slovenia, Spain and Sweden. Australia, in contrast, notched an impressive 3.3% growth.

2012 was even tougher, with another seven OECD countries slipping into recession. But while the average GDP growth slumped to 0.35%, Australia maintained 3.0%.

Things improved markedly in 2013, with only Greece, Italy in Spain still in recession. The OECD average growth firmed to 2.07%. Australia beat that easily with 2.4%.

Since the Coalition was elected in September 2013, it has been downhill all the way. In 2014, the global recovery yielded a remarkably improved OECD average growth of 2.8%. Australia slumped to 2.2%. The 2015 average for the OECD rich club was stronger at 3.0%, as the global upsurge advanced. Australia managed just 2.7%. In 2016, the OECD slipped to 2.7%, while Australia continued to lag at 2.5% — that ranked 16th among developed countries.

Are you worried yet? You should be. #auspol Construction and national net worth continue to decline under Turnbull https://t.co/bgChuU6M8P @IndependentAus

Last year, with the global boom accelerating, OECD economies surged to 3.1% growth. Australia fell back further with a dismal 2.4% to rank equal 23rd out of the 35 economies. Equal with Portugal.

Deterioration on jobs matched that with growth. Australia now ranks a lowly 17th in the OECD on unemployment.

Three data sets enable us to measure the quantum of the loss of wealth following all these failed Coalition budgets. They are deficits, government debt and the nation’s net worth.

Before the 2013 election, the heads of Treasury and the Finance Department issued their non-partisan forecasts based on the settings in place. The 2013 'Pre-Election Economic and Fiscal Outlook' report estimated deficits for the four years from 2013-14 to 2016-17 — as shown in the table below. 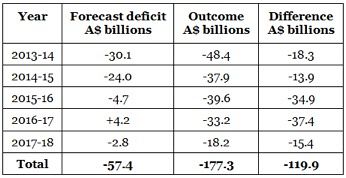 We can see the total deficits to the end of the 2017-18 financial year should have been $57.4 billion over the five years. That’s based on the settings for taxes, other revenue, spending and investment before the first Coalition budget took effect.

We can see from this week’s 2018 Budget figures that the deficits actually delivered totalled $177.3 billion. That’s a difference of almost $120 billion. The outcomes are 309% of forecasts — more than three times worse.

Unlike previous periods in recent history, however, this occurred during extraordinary global expansion, as shown by the GDP growth figures for the rich countries, mentioned earlier.

They will have to work at this, it seems, as the total at the end of March this year was already $350.7 billion.

That, by the way, is against Tony Abbott’s undertaking before the 2013 election that the Coalition had

Blathering ScuMo and LNP co doubled the National debt since 2013 but they’ve turned the ship around and it’s all Labor’s fault. #auspol #budget2018 #abc730 #debtanddeficitdisaster

The loss to the national estate is measured by the Finance Department’s monthly reports. Net worth is the balance of the total Federal Government assets minus liabilities.

At the time of the 2013 election, net worth was -$205.9 billion, having recovered strongly from deeper than -$250 billion a year earlier during the GFC.

It has plummeted since then to an appalling -$407.3 billion in the March figures, which makes this week’s budget forecast to end this financial year at -$325.2 billion simply not credible.

Assuming no deterioration between March and June, that is a loss over the Coalition journey of $201.4 billion.

Clearly, the harm done has extended to many billions worth of non-budget assets squandered.

So where has all this wealth gone? What were the policy decisions which allowed such extraordinary losses to accumulate? And what can be done to reverse this?

Fmr treasurer Peter Costello says most of us will be dead before Australia's national debt is paid off. #abc730 #Budget2018 #auspol pic.twitter.com/SoXuCLdCHY

A grim report card for our useless Coalition government! https://t.co/oFenGeDqyW

What happens when company tax is slashed? Exhibit A: Australia https://t.co/Yk6rMClVzv @IndependentAus. @LiberalAus economic policies are for the benefit of their rich mate donors Not nation builders Economic vandals supporting robber banks #Auspol