Budget 2017: No mention, no policy, no idea on climate

Not a single mention. Climate change is the biggest social, moral and political issue of our time and yet Treasurer Scott Morrison didn’t utter those words once in his entire Federal Budget speech.

This is a budget that puts big polluters ahead of the community and the air, water, forest and land that sustain us. It will be every day Australians that pay the price.

Here's What Climate Change Experts Say About The 2017 Budget https://t.co/sSGQ8ZERXO

In a nutshell, the Budget continues with a 14% cut in environment expenditure since the Coalition formed government in 2013; this is projected to be a 27% cut by 2020. Meanwhile, $7.6 billion have been allocated for polluting subsidies — more than six times the environment budget.

There is no climate change policy, no plan for the environment and no plan to transition the energy economy to prepare for the next century.

Astonishingly, Malcolm Turnbull still wants to give Adani a "cheap" billion dollar loan from his coal slush fund. This one loan is almost the same amount of money that our prime minister is willing to provide our nation’s rivers, reefs and forests this year. He has lost his moral compass.

The prioritisation of gas in this budget further demonstrates the Coalition's failure to recognise the need for a long-term transition plan for Australia’s energy system. Budget measures that foreshadow investment in gas infrastructure and new gas exploration mean Australia will remain shackled to fossil fuels instead of accelerating the transition to renewables.

Australians want their elected representatives to take seriously their responsibility to Australia’s reefs, rivers, people, forests and wildlife seriously. But, unsurprisingly, there is a crisis of confidence in the Turnbull Government’s ability to protect nature.

New ReachTEL polling released this week and commissioned by the Australian Conservation Foundation (ACF) shows only 40% of voters think the Government has a plan. Contrary to the Turnbull Government’s actions, Australians also support increased investment to protect nature (60%), want big business (67%) or polluters (76%) to foot the bill and are more likely to support parties who have a comprehensive national plan (74%).

Here are a few results from the ReachTEL poll, published here for the first time:

'Do you agree with the following statement? 'The current Federal government has a plan to protect the reefs, rivers, forests and wildlife for the current and future generations.' 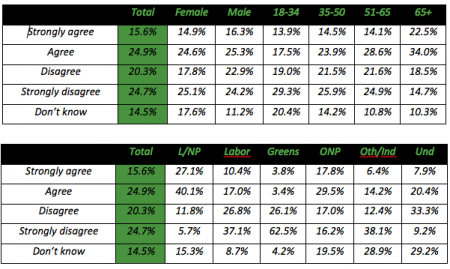 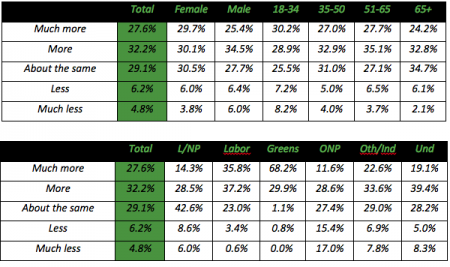 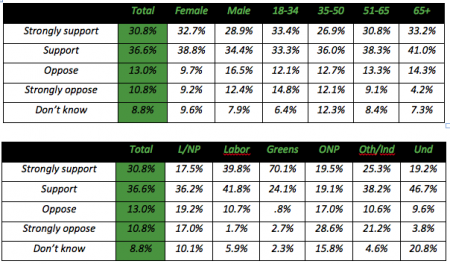 'Would you support a levy on polluting companies if funds were directly spent on protecting Australian wildlife in danger of extinction and protecting reefs, rivers and forests?' 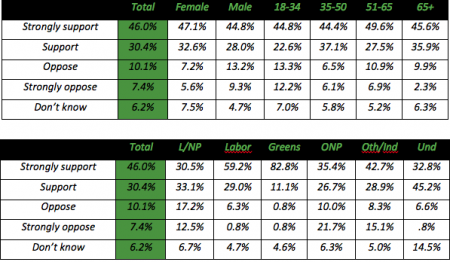 'Thinking about big picture solutions to the problems we have with our reefs, rivers, forests and wildlife, would you support a political party with a policy for a national plan where nature thrives?' 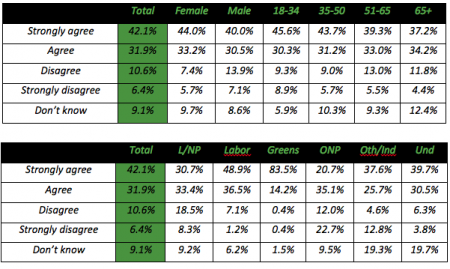 That’s because the Government spends more time barracking for a dangerous, polluting coal mine than it does for protecting our environment. Their credibility is in tatters. They’re completely out of touch with what Australians expect their elected representatives to do.

Our message to Prime Minister Turnbull is pretty simple:

'The only way for you to restore your credibility on environment and climate change is to reverse environment sector cuts and develop a comprehensive national plan to protect nature and move to clean energy. There is no other solution for your leadership, or for our environment.'

By choosing to prop up big polluting companies with loans and subsidies, our government is choosing not to invest in clean energy, education and creating a better future for our children and grandchildren. The Government’s own State of the Environment report called for more spending on our reefs, rivers, forests and lands — not less.

Australians care about our rivers, reefs, wildlife and forests, and expect governments to protect them for our children and grandchildren. They understand the value of nature in a way that the Turnbull Government doesn’t appear to do.

Polluters and big business should be made to pay for the damage they cause to the environment, not everyday Australians. It is the Government’s responsibility to ensure this.

Budget #2017: Major fail on climate change. No mention by Treasurer, no coherent policy, no progress on Paris targets. Here's a real budget pic.twitter.com/dBV4Vs0r0J

Budget 2017 and the environment

Despite the Finkel Review, the Government’s Climate Policy Review, the Vehicle Emissions Review and the completed National Energy Productivity Plan, there is no funding to address Australia’s growing climate pollution. instead, the Environment and Energy Minister, Josh Frydenberg, is planning for failure, saying it is uncertain Australia can achieve net zero climate pollution by 2050.

Budget 2017: No mention, no policy, no idea on climate

12 May 2017, 7:30am Climate change, the biggest social, moral and political issue of our time did not ...
Join the conversation
comments powered by Disqus
News updates