After the NSW Coalition Government this week delivered it's second budget deficit in as many years, Peter Wicksconsiders NSW Premier Barry O’Farrell’s performance so far.

YOU WON'T hear me saying this very often, so take note. I want to send big congratulations to Barry O’Farrell and his team of apprentice ministers.

That’s right, Barry’s promised surplus has turned into a whopping big deficit — and it seems that no matter what the Coalition sell off, and how many people they sack, they are still unable to balance the books.

Barry’s broken promises are such legend now in NSW it has been hard to keep up with them all; however, here is a link to 100 of them after Barry’s first year in the Premiers role.

You would think that 100 broken promises in a year would be enough, as that is more than one every four days. But Barry has set himself with keeping pace with his first year, so below are some of the latest porkies he has sold to the people of NSW.

"There will not be a decision to turn our national parks into hunting reserves."~ Sydney Morning Herald, 13 April 2011

''We have absolutely no plans to privatise either the generators or the poles and wires." ~Lithgow Mercury, 28 January 2011

"We have no intention of doing deals with the minor parties."~ Sydney Morning Herald, 13 April 2011 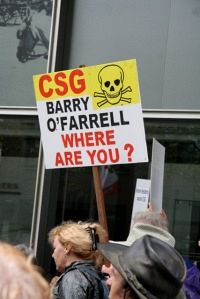 I wonder when the National Party will wake up and smell the coffee and abandon their coalition with this far right-wing party. This is a party that has decided to continue to punish farmers, and those who live in rural communities.

The Liberal Party is the Party that supports the big miners who want to come in and drill for coal seam gas on their property. The party that refuses to support the NBN — and will likely stop rural communities having access to it if they win the next election. Why would a political party, like the Nationals, side with a party that seems intent on declaring war on those it claims to represent.

Barry O’Farrell, and NSW Treasurer Mike Baird have stated that they are delivering a budget that is “responsible”. I agree totally.


Still to come, are rumoured hikes in the road tolls, with the M2 already confirmed to skyrocket, and rumours of thesale of the Government bus service.

Gone, just like the workers compensation scheme; the worse you are injured — the less you are compensated.

Still, we need to spend the money on another level of bureaucracy like Infrastructure NSW, states Barry. Indeed, why not? We clearly have a heap to spend.

Infrastructure NSW, may be expensive and another layer to cause delays, but at least they are independent and know what they are doing.

Run by a former Liberal Premier, Nick Greiner, it must have made Barry feel good to help out an old mate with a good government paycheck.

However, it wasn’t all back slapping and secret handshakes, at least Nick knew his stuff. After all, Nick was the man responsible for the state’s biggest infrastructure failure, the Airport Rail Link, which went into liquidation not long after opening. The state has its fingers crossed that he has learnt from this colossal and hugely expensive mistake. Maybe we should cross our toes, too.

Also in the budget is Mike Baird's promise that he still has $1 billion worth of cuts still coming. But, in the interests of full transparency, he won't tell us where these cuts are going to be.

If Barry wanted to save a few dollars, he could lose some of his parliamentary secretaries — they have shown themselves to be a waste of space and money. After all, Barry promised smaller government, but delivered bigger government. Then Infrastructure NSW; more fat-cat bureaucracy, as my old mate Ray Williams likes to say on the days he gets out of bed. Getting rid of that dead weight around the leg of the state would save a few quid...

We seem to be spending a lot of money marketing and providing information on the North West Rail Link — despite it not yet being in existence. Surely there is a dollar to be saved there?

Instead, this Coalition believes it is better to sack thousands, and then beg the Federal Government for stimulus. Similar stimulus to that which they ridiculed when the Federal government decided it was timely.

However, if you wanted to raise some money, you could ask the rich to pay a fee that allows them to smoke anywhere.

After all, you did sneak an exemption through that allows “high-rollers” to be allowed to smokeat Sydney’s Star City Casino. Nobody else though, just high rollers.

Apparently, according to Liberal Party scientists, the same ones who deny climate change allegedly — the second-hand smoke from a rich person is good for you. There are theories that it has vitamin C in it and actually prevents cancer. Those forced to breathe it should be grateful.

Unfortunately, second-hand smoke from the regular person is still deadly, so you will have to continue to stand in the rain, huddled under an awning to have a fag.

It is also important to remember that both O’Farrell and Baillieu are considered moderates in the Liberal Party. Think of this when someone you know is made redundant, or when your next power bill gives you a coronary, and makes you join those waiting in casualty department at your local hospital — that has been left short-staffed.

Tony Abbott is not considered a moderate...

For further NSW Government failings, here is a link to my post after O’Farrell’s last budget.

(Peter Wicks is a former ALP NSW state candidate. You can read more by Peter on his blog Wixxyleaks, or follow him on Twitter @madwixxy.)