Barnaby Joyce and Section 44: This Coalition Government is over

This Government is over. When Deputy Prime Minister Barnaby Joyce goes, the Coalition’s majority will go with him — and that will make it a hung parliament. At best.

That Barnaby is doomed is not in doubt.

Pretty much everyone, even some of Murdoch’s audience, is by now familiar with Section 44(i) of the Constitution, which prohibits any person from taking a Parliamentary post if he or she:

No-one seems to be accusing Barnaby of allegiance, obedience, or adherence to our bros in Wellington, but the bit that says ‘entitled to the rights or privileges of a subject or a citizen of a foreign power’ is a slam dunk for our Joycey because there is simply no doubt he is well and truly entitled to those rights and privileges.

New Zealand's Prime Minister has confirmed that "unwittingly or not", Barnaby Joyce is a citizen of that country because his father was born there.

Maybe we can cut Barnaby some slack because, after all, who knew about arcane Kiwi citizenship laws?

On 20 July 2017, the day after Turnbull accused the accursed Greens of being "sloppy" when it came to (former) Senators Waters and Ludlum, our very own smirking assassin, Attorney General George Brandis, wrote:

'Any person wishing to be a member of the Commonwealth Parliament should consult with the Australian Electoral Commission about the requirements that they need to satisfy and should consider seeking their own legal advice about whether they meet those requirements.'

Here is George's letter in full: 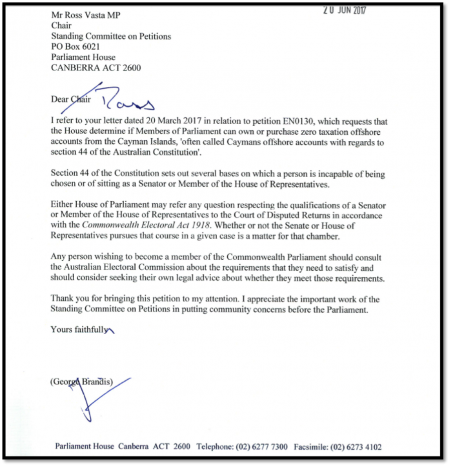 It seems Beetroot failed to heed George’s sound advice, which is sad because it was probably the only sound advice Brandis ever offered as AG and it was just wasted.

In his petition, Tony asked the following: 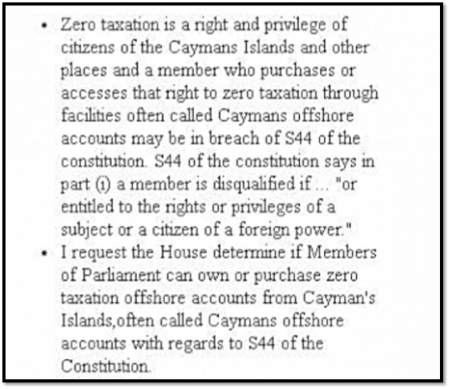 Of course, this was a roundabout way of probing for a weakness in Turnbull’s Section 44 eligibility and, of course, Brandis did not answer, saying only:

Section 44 sets out several bases in which a person is incapable of being chosen or of sitting as a Senator or Member of the House of Representatives.

While we are on the topic of Tony Magrathea, on 3 August he issued a forlorn email, saying simply:

'The Abbott show is over.'

The UK court said the information Member for Warringah, Tony Abbott, provided matches with that on record:

We still don’t know why Abbott didn’t just show his certificate years ago and have done with all the bullshit. He’s a weird guy.

But back to Beetroot.

It is simply a fact the Coalition has no moral fibre. It wants only power.

This Government lied and bludgeoned its way to the front bench dangling from the chain of the Abbott wrecking ball and it will hang onto that power any way it can.

Heel marks in the carpet.

Despite scoring one of the greatest own-goals in Australian political history, this brew of carpetbaggers and wannabe tough guys are now squealing for the High Court to help them out.

Mr Joyce is refusing to step down from Cabinet or abstain from votes in the Lower House – where the Coalition has a one seat majority – claiming he is confident the High Court will clear him to stay on.

You can almost hear the plaintive Coalition entreaties wafting on the cold Canberra night air: Carn youse judges, Beets was born in Tamworth, he’s a deadset Aussie, give him a break. Jesus!

Turnbull reckons he already knows what the High Court will decide.

Mr Turnbull is also confident the court will clear his deputy, declaring:

"The Deputy Prime Minister is qualified to sit in this House and the High Court will so hold."

"You won't find any constitutional lawyers expressing that kind of confidence."

On the face of it, Beets is gone. That will have some interesting consequences.

For starters, the remaining Nats will fight like cats and dogs to lead the mighty Party but, more amusingly, a true hung parliament will be a sight to behold.

The fate of the nation will rest with Katter, Wilkie, Sharkie, McGowan and Bandt.

That is, of course, if no more heads roll.

Independent MP Bob Katter sends out a statement, says if government “act like a bunch of dingoes” he won’t guarantee supply: pic.twitter.com/m6x75SnMBf