Were it legal, I’d open a book on conscription being introduced before the 44th Parliament finally faces the voters. It’s what Tories do.

On 5 November 1964, Coalition Prime Minister Robert Menzies introduced National Service aimed at boosting army numbers to 33,000 by 1966 to address a perceived weakness against the Asian Communists.

In March 1966, Coalition Prime Minister Harold Holt announced National Servicemen would be sent to Vietnam to fight with units of the regular army.

The Coalition’s answer to the ‘if selected’ question was a grotesque, almost medieval, ritual — a bastard cross of casino and death.

365 marbles, each marked with one day of the year, were placed in a barrel. If your birthday came out, it was the jungle for you. Happy Birthday!

Abbott is better placed. By denying unemployed young men any form of social support, he’s got a ready, albeit half-starving, pool of young Australian men to sacrifice on the altar of Mars.

Howard, notwithstanding the contempt in which he should be held for conspiring to create the state of mind that is ISIS, resisted the urge to conscript for Iraq or Afghanistan. It was bit like a man fighting back a Tourette’s symptom, but Australia had no appetite at the time and Howard was the consummate political animal. You could see him chafing though.

The U.S. was not so constrained. They didn’t need conscription for the War on Terror. They had a pool of poor, unemployed young people with no prospects whatsoever unless they joined the military. Many joined because it was the only way they could obtain an otherwise unfeasibly expensive college degree. Others so they could eat. Others to have their teeth fixed.

We are told our current escapade in the Levant is going to be a long war, though it’s not really a war because we don’t recognise ISIS as a state and so we can’t declare war on it. It’s an operation. A long operation.

It has already dawned on the Coalition that the best way to deal with the unemployed is to kill them. Then glorify them. Then use contrived media to entice other young men to their deaths.

Get ready for the body bags draped in flags.

The War on Terror after 9/11 went so well, we're invading Iraq again. 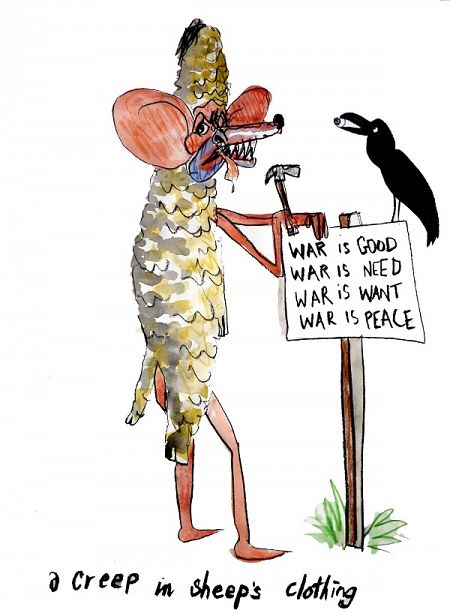