A fuel efficiency standard would be a critical measure in fixing the climate crisis and it's up to the public to make their voices heard, writes David Ritter.

HERE’S A RIDDLE for you: What stinks, results in garbage being dumped in Australia and is just the same in Russia?

Answer: The fact that Australia doesn’t have any national fuel efficiency standard to regulate the pollution produced by road vehicles.

Yes, it is true. Apart from Russia, Australia is the only other country in the OECD world that doesn’t have these standards — and the result is that we are becoming a dumping ground for dirty and obsolete cars that the rest of the developed world doesn’t want.

The absence of a national fuel efficiency standard is just one more example of the failure of politicians in general (and the Morrison Government in particular) to do the right thing by the Australian people when it comes to climate pollution.

Already, road transport emissions are one of the largest and fastest-growing sources of greenhouse gas pollution in Australia, with cars and light commercial vehicles counting for 60 per cent of all transport emissions. And of course, fossil fuel engines are responsible for a whole bunch of other health nasties, too.

Having run a viciously effective scare campaign on electric vehicles before the 2019 Federal Election, in November 2021, Morrison did a rhetorical U-turn to come out with his own electric vehicle (EV) strategy. But typically for the previous Government, the plan lacked substance and in particular failed to include any fuel efficiency standard or financial support to encourage purchasing of EVs.

Under the new Government, there is now an opportunity to finally get this right — and to prevent Australia from getting stuck as the clunker country. This is a key step forward for how we can make EVs more affordable and accessible for more Australians.

None of this is to say that there are not a lot of other crucial reforms that are required, too. We need much greater planning and investment in active and public transport in our cities, towns and suburbs to reduce emissions, build resilience and improve the quality of lives and communities. But right now we have an opportunity to act on the fuel efficiency standard piece of the puzzle.

The Commonwealth Department of Climate Change, Energy, the Environment and Water (DCCEEW) has just released a new National Electric Vehicle Strategy: Consultation Paper and is asking for public feedback on how Australia can rapidly cut emissions from transport by switching to electric vehicles.

And – thank goodness and about time – a national fuel efficiency standard is in the consultation document and firmly on the table.

As the consultation paper says:

Over 80 per cent of the global car market has vehicle fuel efficiency standards.

The standards send signals to manufacturers to increase supply and sales of EVs and low emissions vehicles. The absence of these standards in Australia has been cited as a key reason why EV models are not supplied to the Australian market.

Despite this being one of those complete no-brainers, the Government has as yet still not yet decided to proceed with implementing this critical measure. At this stage it is crucial that there is a heap of personal submissions in response to the consultation paper, calling on the Federal Government to do the right thing. 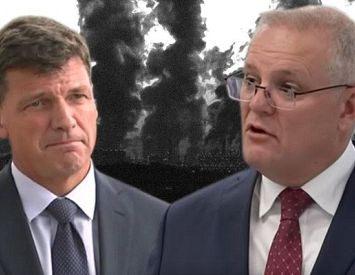 Now admittedly, writing a submission to the Government is perhaps not up with the great thrills in life and is unlikely to make anyone’s bucket list. But this really is democracy in action and one of those occasions when taking some minutes to put in a submission can make a real difference. Personalised contributions are always much more likely to be read.

If enough of us do this one thing here, together we will materially increase the probability that Australia will end up with a fuel efficiency standard, which will make a rapid and significant difference in reducing climate pollution in this country. We don't all have to buy an EV tomorrow to benefit from the reduced emissions and cleaner air that will result from more EVs on the road.

And it just so happens that the wonderful people in my own team at Greenpeace Australia Pacific have created a helpful portal to make it easy to write and lodge your own personalised submission. Some sample talking points are provided.

Galvanising support behind the fuel efficiency standard is also essential because we know from documents leaked to the Sydney Morning Herald that there are vested interests lining up on the other side to try to delay the EV transition in Australia. And there’s plenty of form on this around the world.

As detailed in my column last month, Toyota has been binged as a major roadblock to the electric vehicle transition worldwide. So there’s every chance that, yet again, this will be people lining up to take on the big polluters.

Electrifying our transport system is a critical part of addressing the climate crisis and introducing a fuel efficiency standard is an important step towards achieving that goal.

So why not take the plunge and write that submission? 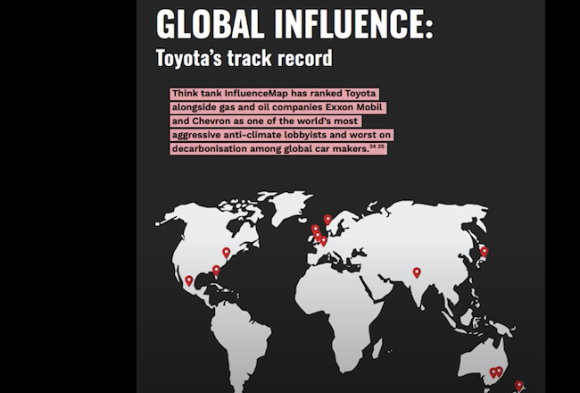 Toyota has been identified as a major roadblock to electric vehicle transition, delaying climate action by refusing to set phase-out dates for fossil fuel engines.