Australia after one year of Abbott: How did it come to this?

With the Abbott Government celebrating the anniversary of its election victory, Alan Austin offers a frank appraisal of his time in charge.

REPORTS ON THE Abbott Government’s first year are rolling out. Overwhelmingly they are negative. Only Rupert Murdoch’s paid liars and Michelle Grattan have a kind word, it seems.

Few, if any, of the upbeat outcomes supporters of this hapless regime have tried to find are positives in any real sense.

Stopping the boats and ending deaths at sea are successes, some claim. But is there real evidence of this? With the connivance of the mainstream media, the Government has certainly stopped news of the boats and has ended reports of drownings. But that is not the same.

Until restrictions on independent observers visiting the key venues are lifted and ministers again answer questions honestly, the Government’s claims cannot be believed.

Some have hailed Abbott’s diplomatic ‘victories’ abroad. True, these generate positive press at home. But overseas?

Unfortunately for Australia, Abbott is now the leader with the worst record of negative headlines worldwide since Colonel Muammar al-Gaddafi of Libya.

More than 35 issues in the last year have generated news stories abroad ridiculing Abbott and Australia. Examples include:

And that’s just in Malaysia.

Abbott is on a "charm offensive" in India (with the emphasis squarely on "offensive"). http://t.co/dzWASZQH5z

Far more scathing assessments have appeared in other languages elsewhere. This journal has linked to about 65 media reports in more than 30 countries scoffing at Australia in recent months.

Questions demanding answers at the one year mark include:

It is now clear the Abbott Government arrived with no coherent vision — just a bunch of three-word slogans.

Love him or not, John Howard had an agenda and strategies: break the power of the unions, end multiculturalism, bolster the traditional male-led family, gut the republican push – and for a brief and glorious moment thrust upon him – reduce gun ownership in Australia.

Earlier, Paul Keating articulated and then implemented ambitions for an internationally competitive economy with a viable tax system, open financial and products markets, a freed market for labour and universal superannuation. Plus genuine reconciliation with the first Australians.

Kevin Rudd? Well, we will never know what he may have achieved – other than the formal apology to Indigenous peoples – had he not been shirtfronted by the worst global economic downturn in 60 years in his first year.

All previous successful prime ministers appear to have used wisely their periods in Opposition to formulate a program. Abbott clearly hasn’t.

A compelling question for Coalition supporters – party executives, MPs, the IPA, the Murdoch and Fairfax media board members and other corporate bankrollers – is why no-one saw this coming. Surely it was obvious that Abbott in Opposition was dispensing slogans, negativism, half-truths and blatant untruths, but had no actual plan for government.

This was openly admitted in June, when Abbott announced he would start looking at reforms to the tax system, with a white paper due at the end of 2015.

Why, with the carbon and mining tax revenues now gone and nothing to replace them, was a blueprint for tax reform not finalised well before the last election?

Keating recounts his long hours spent in meeting after meeting with those who understood the location of power in Australia and how to wield it. This began when he was a teenager and continued throughout his backbench and opposition periods.

“If you want to run the place, you’ve got to work out how all the organs function, as best you can.

"And I did that. Particularly in the period of the Whitlam Government, I made myself busy going around the bureaucracy, working out where all the bits were.”

“You are one of the very few backbenchers who ever sought me out.”

“If you want to learn something, go to the masters.”

“And you know what? Most people at the end of their careers will give you an honest summation of what they have found. And they will encapsulate it for you. So you are getting really distilled product from them. I used to then try and make sense of it all. Is the place over-protected? Are we just killing the place by ring-fencing it with tariffs and quotas?

“Nation building is a hard caper. And I had to make sure this slothful locked-up place finally became an open, competitive economy. And I would have broken my back to get those tariff cuts through. And I did.”

Keating did change the nation for the better. What few changes Abbott is making appear only for the worse.

So what of the future?

There are several possibilities. At the next election, it seems probable there will be a return to Labor. So it is to be hoped that the leaders-in-waiting – Shorten, Wong, Bowen, Albanese, Dreyfus and others – are making good use of their time in opposition to formulate a vision, develop policies and sharpen their tactics.

There is also a likelihood Abbott will be replaced as Coalition leader before the next election. This will be a certainty unless opinion polls turn around in the next few months. So it is equally to be hoped that Coalition hopefuls – Turnbull, Billson, Fifield, Keenan, Stone and others – are also refining their vision and strategies for the future.

If Shorten, Turnbull and the rest seem unusually disengaged at this stage in the electoral cycle, that may not be a bad thing.

"@davrosz: Join me in not celebrating Tony Abbott's first year as PM on Sunday."with pleasure 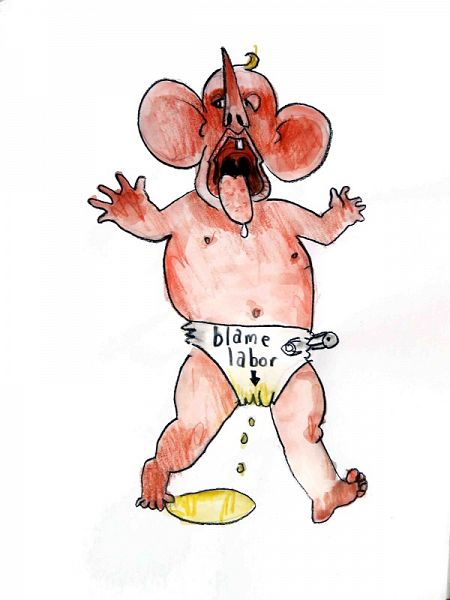