The beating heart of barbarity is the indiscriminate and inhumane treatment of the vulnerable by those in positions of power, writes Nour Dados.

LAST WEEK, Andrew Bolt – touted on his own page as 'Australia's most read columnist' – took aim at the large March in March demonstrations, in a column titled Barbarity should appal us, or we’re in trouble.

Bolt's claims against the March in March protesters are twofold.

On the one hand, they are hypocrites because, according to Bolt, the 'vicious hatred' promoted by some of the banners and statements at the rallies would have been denounced by the protesters had they been used by 'the right'. It goes without saying that against extensive contradictory advice voiced in the Comments section of his blog, Bolt assumes everyone at the marches belongs to a coherent social group called 'the left'.

On the other hand, the protesters are also barbarians who have fallen down a slippery slope of savage brutality.

The evidence for this claim is found in a handful of banners with slogans like 'Kill Abbott' and 'Kill the Politicians'.

Rather selectively, Bolt omits numerous other banners calling for compassion and justice, like one from March in March on the Gold Coast that read

'When did compassion go out of fashion. RIP Reza Berati'.

To claim that an individual is a hypocrite and a barbarian is surely not something one undertakes lightly and without substantial evidence. Bolt's “proof” extends no further than sighting photographs of banners and t-shirts at a protest. Worse, he goes far beyond unsubstantiated accusations levelled at an individual and spares no-one among the 100,000 plus Australians who marched across the country the charge of hypocrisy and barbarity.

Many will respond to this with the shrug of a shoulder and the roll of an eye. After all, Bolt's bloodsport is cold hard generalisation. From a few banners and t-shirts, he can deduce the 'nature' of the protesters, and reduce a multitudinous group of politically diverse people to a hoard of hypocrites and barbarians.

The charge of "barbarity" is worth examining.

Surely, if barbarity doesn't appal us, we are in trouble. But whatever we may think of the slogans and banners that Bolt found offensive, we can be certain that no-one at the protests was wielding weapons or inciting violence against anyone else.

The banners and opinions expressed a frustration with a political process that has locked people out of decision making beyond a symbolic vote at the ballot box every three years.

The barbarity that concerns Bolt may be among us, but it is not upon protesters demanding social justice and accountability from government that we should be looking for it.

More often, the case, however, is that opposition to state power is marginalised to the extent that all forms of dissent face increasing retribution.

Take, for example, last Friday’s arrest of a group of protesters belonging to a number of Christian churches – including Catholic, Uniting, Churches of Christ and Hillsong – at Immigration Minister Scott Morrison's Cronulla office after they observed a prayer vigil for the victims of Australia's asylum policies.

Even a familiar cultural form like Christian prayer is not exempt from prosecution when it exposes the workings of the political power that maintains the boundaries of our social world.

Amid the objects the group had brought with them to the prayer vigil were candles and a picture of Reza Berati, the 23 year old Iranian man who was killed during an attack on refugees held at the Manus Island Detention Centre on 17 February.

The prayer vigil was another tragic reminder that it has been 37 days since Reza Berati was killed and no-one has been charged with his murder.

There has been a lot of speculation in the media about how Mr Berati died.

Last week, a group of journalists who had been granted access to visit the Manus centre heard from asylum seekers that Mr Berati had been hit and had fallen down a stairwell.

Then they were told:

At the same time, statements from the Ministry of Immigration and Border Protection have been few and far between.

After initially claiming that Mr Berati had been killed outside the centre, it took almost a week before Immigration Minister Scott Morrison corrected the earlier statement:

'As advised on the afternoon of Tuesday February 18, I indicated that I had received further information which meant that I could no longer confirm that the deceased man sustained his injuries outside the centre.'

Mr Berati was simply referred to as the 'deceased' and no public statement of sympathy was made to his family.

Instead, Morrison concluded that:

'In a situation where transferees engage in riotous and aggressive behaviour within the centre, this will escalate the risk to those who engage in such behaviour.'

But who exactly does Mr Morrison believe is engaging 'in riotous and aggressive behaviour' within Australia's asylum processing system? While claims of 'rioting' among asylum seekers in detention prior to the attacks on 17 February have been circulating, there is no evidence that links Reza Berati to those incidents.

More importantly, however, what exactly are we to make of government reports of 'rioting' when refugees are facing the aggression of a system that keeps them indefinitely incarcerated for no crime other than seeking asylum, and when that system exposes them to extreme violence and even death?

In his analysis of what happened at Manus, Waleed Aly stated that it was not the 'defective personalities of individuals' that lead to riotous protest, but an inevitable human reaction to inhumane treatment. Indeed, why should those who have been persecuted, humiliated, tortured and denied, quietly acquiesce to their fate just so their captors can maintain a veneer of peaceful civility, and the shred of legitimacy, for a deeply brutal and inhumane system?

Mr Bolt would like us to believe the opposite.

The picture he wants us to see is one of culprits who bring the violence upon themselves.

Responding to Aly on 21 February, he wrote:

'I suspect such violence is also a product of the culture of the asylum seekers, and many Australians would doubt the wisdom of importing it.'

On March 18, in commenting on a video aired by the ABC that showed a group of asylum seekers who had been put in one of the government's infamous orange lifeboats and sent back to Indonesia expressing their anger against Australia, Bolt went further:

'I understand the extreme disappointment at being turned back, but why the threats of another September 11? If Sedigh and his fellow passengers were allowed here, would they make such threats again if denied anything else, such as a job or welfare or loan?'

But our daily statements and activities do not simply 'express an opinion', they also reproduce our social world and the forms of social life that shape us.

Statements of anger by refugees who have been denied asylum, and held indefinitely in captivity after fleeing persecution, humiliation and torture are a response to the material conditions of their imprisonment and suffering. To deny their response is a product of a world that acts with harshness and cruelty against them is to deny that they are the victims of a barbarism that risks catching us all in its grip.

It is easy for Bolt to put on trial and prosecute on his blog those who cannot speak back to his accusations. What they had been through before they were sent back in the orange lifeboat, a history that would count in any court of law if they were actually on trial, does not count in Bolt's courtroom where they are handed sentences without a right of reply.

They are Andrew Bolt's 'barbarians'.

Treating them as such justifies their indefinite imprisonment and absolves the government of responsibility for their fate. By this logic, if refugees are killed in detention, it is their fault.

It should come as no surprise that leading government figures have begun defending the 'right to bigotry' as they prepare the ground for the repeal of important sections of the Racial Discrimination Act. In order to operate effectively, Australia’s asylum system needs powerful accomplices and voices in the community like those of 'Australia's most read columnist'.

It is surely this indiscriminate and inhumane treatment of the vulnerable that is the beating heart of the barbarity that walks among us. 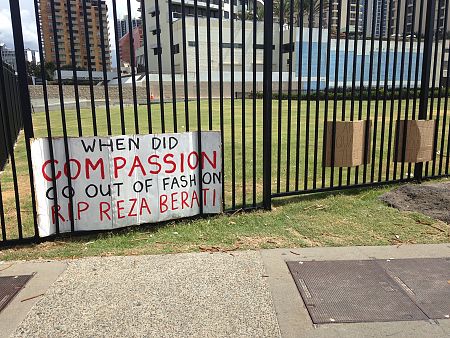 "We want to draw attention to the fact that there are 1138 children in indefinite detention right now," - @MattAnslow pic.twitter.com/qmkhHt48at

27 March 2014, 5:30pm The beating heart of barbarity is the indiscriminate and inhumane treatment of the ...
Join the conversation
comments powered by Disqus
News updates