The AFP faced Senate Estimates last week to talk about the investigation into Mal Brough and others. As 'Ashbygate' author Ross Jones writes, it all got a bit weird and presaged the snow job to come.

IAN MACDONALD, the partially-hinged LNP senator from Queensland, is a strange chap.

He’s the guy who likened GetUp! to the Hitler Youth and alleged, in a very shouty way, that Joseph Goebbels would have been proud of Stephen Conroy.

Macdonald has hung on long enough to become father of the senate. He is also chairman of the Senate's grandly titled Legal and Constitutional Affairs Committee, a part of the Estimates process that held public hearings last week.

The Committee includes Sen George Brandis (Liberal, Qld), Barry O’Sullivan (LNP, Qld), Jacinta Collins (Lab, Vic) and Catryna Bilyk (Lab, Tas). It is a fractious affair at the best of times and Tuesday 9th of February 2016 would prove to be no different.

Facing the Committee members were two cops. Not just any cops – they were AFP Commisioner Andrew Colvin and Deputy Commissioner Leanne Close. Serious cops. They were there to talk about Mal Brough.

I would like to ask some questions about the status of the AFP investigation into the theft of the official diary of the former Speaker of the House of Representatives.

I appreciate the sensitivity of the matter, as the investigation obviously remains on foot, so I will be attempting to ask some fairly factual questions, but please let me know if you think it is inappropriate, given that the investigation is on foot.

It has been reported publicly that the AFP raided the homes of Mr Brough, Mr Ashby and Karen Doane, looking for evidence in relation to the theft of the former Speaker's diary. Are those reports accurate? The way that you have characterised them, Senator, I guess is relevant to the investigation.

We are making an investigation into the unauthorised disclosure of and access to the diary. I would draw a distinction between that and theft. I just want to be very careful about what we say.

So it wasn’t theft of, it was unauthorized exposure of and access to.

After some aspects of pedantry were cleared away, the Deputy Commissioner volunteered:

Senator, I can confirm that the search warrants were executed on premises for the three people that you have just mentioned.

Are there any other search warrants that are fitting in with Mr Colvin's point and that are a matter of the public record?

Leanne got a bit more cagey, replying only:

No, there are none on the public record.

Nothing would have been on the public record had not Ashby sent a photo of the warrant to the media.

Okay. What is the current status of the investigation into Mr Brough's conduct?

That’s a tricky one.

As you can understand, we are relying heavily on electronic records, which we have obtained from various entities. Because of the complex nature of this matter we have also had to obtain legal opinion in respect of search warrants and other avenues of inquiry.

Just to demonstrate, some of the investigation time frames are quite lengthy, because we have recovered, to date, in excess of 7,600 emails, 141,000 documents, 116,000-plus images and thousands of email attachments. That just highlights for you the extent of the investigation we are undertaking.

Far out. That’s a lot of stuff. Nothing beats coercive power and the AFP have that in spades. More than me, that’s for sure.

Does all that material you just referred to cover the book Ashbygate?

Have you read the Ashbygate book yet? You really should. Find out how to find one here -> https://t.co/PI0sbRaUzo pic.twitter.com/QCq3HMCmRD

In other words, the AFP enquiry is confined to ‘unauthorised disclosure and access’ and is not going anywhere near abuse of the court or a breach of S147 of the Commonwealth Criminal Code, which makes it pretty clear you can’t set out to harm a Commonwealth public official - which is what an MP is and what the Ashbygate plotters did.

Anyway, Collins kept pushing and the AFP stayed cagey. O’Sullivan protested and Collins accused him of having come straight from the pub, to wit the Kingston Hotel. Not me, said O’Sullivan.

After Deputy Close obliquely confirmed Mal had been formally interviewed:

It really will depend on the analysis of all the material that I outlined to you earlier as to whether we need another interview or not.

That would be a very time-consuming exercise, I take it … For something that I would have thought – and you can tell me I am wrong – in the course of criminal activities that the AFP look at would rank pretty low: unauthorised disclosure.

… there are broader considerations for the AFP than just the penalty of the offence. It is the circumstances and the public interest in the matter. I am probably better off just leaving it at that.

#auspol AFP won't finish investigation into Mal Brough for a long time. Uhlman says he won't be regarded until after election

In his strangled voice, not to mention syntax, Senator Brandis chipped in:

'Can that be emailed James it is hard to read Mal.brough2@bigpond.com'

Mal Brough to James Ashby: "Can that be emailed, James? It is hard to read." #SlipperDiaries #auspol

Macdonald was onto it:

It is wasting resources, is my point, when we are dealing with criminals, thugs, rapists, murderers, and we have the AFP looking through hundreds of thousands of documents and emails for an offence which, even on conviction, I guess would get a good behaviour bond or something. That would be my experience of how lenient the courts are these days …

And that, my friends, is the party line. Nothing much happened. No coup here.

One of my trusted sources, Mr Tabasco, sent me the excerpt and I confess to not trying to track the official document (it’s not that easy), but in the excerpt an odd thing stands out. 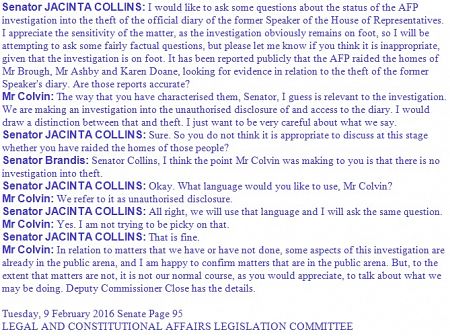 Ross Jones is the author of  Ashbygate: the plot to destroy Australia's Speaker, published by IA, October 2015.

Labor has referred Stuart Robert to the AFP over China trip. Do you think he should be investigated? #YourSay https://t.co/23ioGSfcZN