Milestones in the life of a new government must be celebrated — or, in the case of the Abbott Government, lamented. Alan Austin reports.

THE ABBOTT REGIME has reached a remarkable landmark — its 25th blatant broken promise. That’s one every six days since the September election.

This achievement is astonishing for several reasons. First, because Abbott won office after a three-year campaign centred on one broken promise by Julia Gillard.

Secondly, because Prime Minister Abbott has had none of the obstacles in his path which prevented the hapless Gillard from implementing Labor policy — a hung parliament, minority government, ornery Independents, an obstructionist lower house, treacherously hostile media and an opposition hell-bent on destruction.

The 25th broken promise was...

... Abbott’s insistence at a press conference in Jakarta in October:

“Can I just scotch this idea that the Coalition’s policy is or ever has been tow-backs … There is a world of difference between turning boats around in Australian waters and the Australian Navy towing them back to Indonesia.”

Reports by the ABC on Tuesday, however, and by the Sydney Morning Herald on Thursday confirm reports in the Indonesian media that boats are indeed being towed back to Indonesia.

Here are all the others:

That deportation really hit the spot. I might wash it down with the tears of an unaccompanied minor. #auspol pic.twitter.com/p2c8Dipoea

This was the sweetener for the NGOs staying silent through the election campaign about the overall $4.5 billion cuts to overseas aid. Done deal.

Bishop announced in January that funds to the NGOs will also be cut.

Before the election the Coalition promised to provide a Customs ship to monitor Japanese whaling in Australia’s region.

“The Coalition commits to sending a Customs vessel to the Southern Ocean. It is important that Australia has a Southern Ocean presence given the ongoing risk of confrontation between whalers and protestors.”

Now, after the election, the government has stopped the boat. 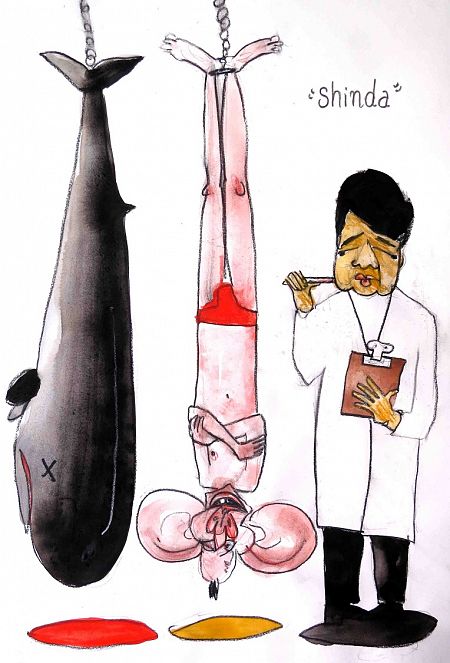 Abbott announced in December that businesses could no longer expect subsidies.

Since then, it has become clear the government is still subsidising some sectors – to the tune of billions – including the fossil fuel industry, miners and primary producers.

Criteria for subsidies appear to be shoring up marginal seats, repaying political debts and giving favours to mates rather than the national interest. An example of this is Abbott giving $16 million to Cadbury in Tasmania.

“No cuts to education … and no cuts to the ABC or SBS.”

On January 30th communications minister Malcolm Turnbull announced a review into the ABC directed precisely at cutting its budget:

“… the study will not review the content of what is broadcast, but rather the cost of delivering that content and the operations that support it.”

19. No deals with the Greens

Last August Abbott insisted most emphatically that he would never

“... do cheap and tawdry deals with the Greens.”

Barely in office, the government swooped on the chance to cut a deal with the Greens to remove the debt ceiling.

After years in opposition condemning Labor’s relatively modest debt, this is as tawdry as it comes.

When the divisive former Liberal Party member for Indi lost her seat in a surprise rejection by voters, Abbott declared that there would be no government job for Mirabella.

She is now on the board of the submarine maintenance body.

On Indigenous education, Abbott said before the election:

“What I'd like to see done very early on, should there be a change of government, is get figures published on a regular basis for school attendance.”

As with all promises to Aborigines, nothing has been done.

Finance Minister Mathias Cormann confirmed in December that cuts to the disability pension were underway:

“This is one of the fast-growing areas of government expenditure. The commission of audit is looking at this whole area for us … and is expected to make some recommendations on how that [cutting spending on the disabled] can best be achieved …”

The Liberal Party platform was emphatic:

“We will restore accountability and improve transparency measures to be more accountable to you.”

Now, routine reports on the arrival of asylum seekers, treatment of refugees and the state of the budget are withheld.

Journalists may subscribe to media releases in some ministries, but not all. Those excluded are Indigenous affairs, human services, justice, veterans’ affairs, women, the arts, sport and small business.

Australia appears increasingly to be emulating North Korea — not just in the craven mass media which will never criticise the Glorious Leader, but in government secrecy as well.

Abbott’s first thirteen broken promises and hypocrisies were all listed here at IA in mid-November.

14. Spending his first week with the Yolngu

11. Relations with the region

9. Seat on the UN Security Council

8. Returning the budget to surplus

And finally, with bitter irony:

From Abbott in December:

Probably. But that’s not the problem.

The worry is that there are plenty more to come. 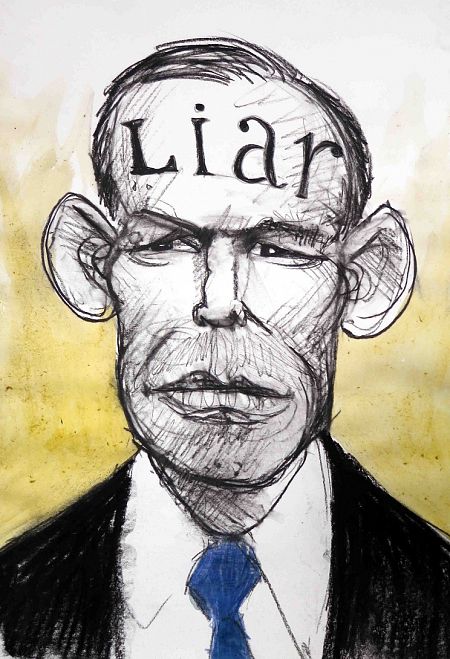 The originals of John Graham's art, featured in this piece as well as throughout IA, are available for purchase by emailing editor@independentaustralia.net.

Abbott's disgusting life has been smeared all over ours. This man is beneath us. #auspol pic.twitter.com/XZ25WcVIlR