Abbott’s bogus war narrative and his problem with history

Tony Abbott has fundamentally broken faith with the Australian people by saying ISIS is targeting Australia because of “who we are and how we live”, writes Adrian Vandermey.

Unfortunately, in attempting to capitalise on these new events in an attempt to bolster his opinion polling by using Howard-style tactics, PM Abbott is ignoring some harsh realities about why domestic Australia is now seen as a target for Middle East struggle.

"ISIL will claim that our involvement in this international effort is the reason they are targeting us, but these people do not attack us for what we do, but for who we are and how we live."

Despite this narrative’s denial of the truth, the harsh reality is Australia has caused the threat to itself by striding clumsily with guns blazing and meddling in Middle Eastern affairs — something that began with military action in Afghanistan in 2001.

“Australians were subject to a terror attack in Bali long before there was any talk of Australian involvement in Iraq.”

Abbott on new Iraq War sparking threats: “These people do not hate us for what we do… They hate us for how we live" pic.twitter.com/3P6WYjwo7y

This statement from the PM is ambiguous at best and disregards the cause of the 2002 Bali bombings conducted by Jemaah Islamiyah, an Indonesian terrorist organization with close links to Al Qaeda, which was fighting Australian soldiers on the ground in Afghanistan at that time.

"Australia was warned about its participation in Afghanistan and its ignoble contribution to the separation of East Timor, but it ignored this warning until it was awakened by the echoes of explosions in Bali.”

It was Australia’s foreign policy actions abroad, for good or bad, which resulted in the attacks in Bali in 2002, not the Australian way of life.

Last Monday, in a call for action against it enemies, ISIS urged its members to kill civilians and soldiers of the nations aligned against it, naming Australia.

They did this not because Australia is a liberal democratic country, but rather because Australia has allowed itself to become embroiled in Middle East politics and line up as an ally and soldier on the battlefield with the United States.

Why then would the PM come out and claim differently?

The prime minister is playing a political game, attempting to frame the threat to Australia in a way that absolves Australia as the cause of the threats itself.

Abbott in cuckoo land with idea that "they" "hate us" for who we are, not what we've done. Remember destroying Iraq? http://t.co/nKGlFRWKar

By framing ISIS’s objections to Australia as an aversion to the Australian way of life rather than the questionable actions of previous Australian governments, Tony Abbott can now repeat with impunity the actions of John Howard, his predecessor and political mentor, by attempting to write a narrative around Australia’s national security, thereby embroiling Australia in another military campaign using an incorrect justification.

It has also allowed the Abbott Government to push through, with bipartisan support, questionable national security legislation which improves ASIO’s ability to monitor citizen’s actions online with a significant loss of freedoms.

This piece is not suggesting ISIS is something Australia shouldn’t be dealing with — rather that, in the interests of properly informing the public ‒ an essential responsibility for governments in a democracy ‒ the narrative for such action should be accurate.

According to Bob Woodward in Plan of Attack, in 2002 Secretary of State Colin Powell privately told then President George W. Bush about his “Pottery Barn rule”:

“You’re going to be the proud owner of 25 million people… all their hopes, aspirations and problems”.

Or in on other words:

This is the narrative that should have been written.

Apparently they hate us for our freedom.. Eight ways Tony Abbott is trying to trade freedom for security http://t.co/YTC9cSnKOZ #auspol

Mr Abbott should, in his address, have said words to the effect of:

As the government in power in 2003, we started something in the Middle East which was left half finished when we ended operations in 2007.

Now the state of Iraq is under threat from an enemy which would see a weakened Iraq fall and be replaced by a nation that is far worse than the former Hussein regime.

Australia is partly responsible to Iraq and the Australian soldiers who have died there, so that we must ensure this new threat is prevented from securing a greater foothold and posing a potential a threat not only to the people of the Middle East, but also the international community.

By being honest and upfront about Australia’s military actions, the Government still may have seen its polling improve, given the emphasis placed on national security by voters. But, in any case, the Government needed to own the intervention and breakage it made, respectively, in 2001 and 2003 in the name of ‘freedom and security’ to show good faith with voters and to reduce the vicious Islamophobia we are now, unfortunately, seeing spread like wildfire through the community.

Adrian Vandermey is a masters of international relations student at the University of New South Wales. You can follow Adrian on Twitter @VandermeyA. 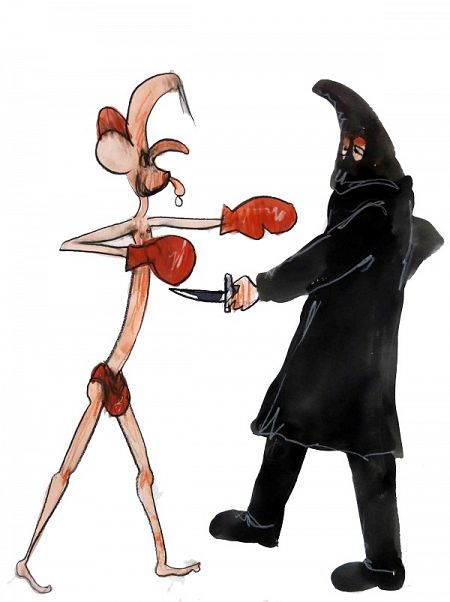 Abbott’s bogus war narrative and his problem with history

1 October 2014, 8:00am Tony Abbott has fundamentally broken faith with the Australian people by saying ...
Join the conversation
comments powered by Disqus
News updates