Abbott to choke on the silver spoon 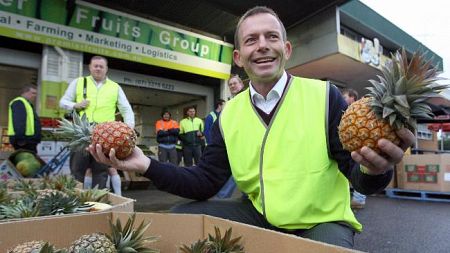 In hindsight, Tony Abbott probably wishes he took a holiday on Monday and didn’t turn up to work all week. He’s had a shocker, especially on Wednesday and Thursday — as was reported by Barry Cassidy on The Drum.

Some people might choose to see his performance on ABC 7:30 as anomaly in an otherwise successful run as opposition leader. Perhaps Lisa Wilkinson’s interview on Channel 9 was another anomaly?

It could be argued that the historically soft treatment of Abbott by the mainstream media is now causing his downfall. When a politician is challenged on a daily basis, they get stronger, smarter and better at finding the right answer at the right time. Abbott proved, when challenged by Sales and Wilkinson, that he had nothing.

Flustered, defensive and confused. No three-word slogan could hide his ineptitude.

Conversely, Gillard, who has been constantly challenged by the media since becoming Prime Minister, produced a calm, calculated and consistent performance in a marathon press conference on Thursday. And Abbott couldn’t even be bothered watching this conference, or reading the transcript later.

It could also be argued that Abbott’s terrible week was the inevitable outcome of an unintelligent campaign. His strategists have backed themselves into a corner on several policies.

The carbon price was, according to Abbott, meant to wreck the economy. Now that it hasn’t, he surely has to drop this line completely.

The NBN was meant to be a complete waste. But people want faster broadband, and if they don’t get it, it will now be Abbott’s fault.

The mining tax was apparently meant to reduce investment in a booming industry. But the postponed Olympic Dam project Abbott claimed was put off because of the mining tax, is a project exempt from this tax that only includes coal and iron ore. (Coal and iron ore projects continue to grow, bringing record investment).

Craig Thomson or Peter Slipper were meant to bring down the government. But now all anyone is talking about is Kathy Jackson (whose partner, Michael Lawler, is friends with Abbott) and James Ashby, whose sleaze is rubbing off on Brough, Pyne and Abbott.

Gillard was meant to be untrustworthy and a liar. But what has she lied about? Abbott is the one showing himself to be a pathological liar — did he read the report or not?

In my view, both the above points are contributors to Abbott’s woes this week. But he has a much larger problem, one which I don’t think he’s going to be able to fix.

This problem is his conceited belief in his own infallibility.

He genuinely believes he was born to lead. He thinks that because he was born into a privileged life, he has innate advantages over anyone who was born ‘below him’.

You see, this attitude a lot in white men of Abbott’s age, who were born with silver spoons in their mouths, educated at elite schools, given everything in life without learning how to really fight for something, or to compromise to achieve success.

The worst part is, people like Abbott don’t even think of themselves as lucky. They think they’ve somehow ‘earned’ their success, through the quality of their ‘breeding’.

But in my experience, these are exactly the type of people who don’t have what it takes to compete. Abbott never had to be all that intelligent, he never had to have charisma or a likable personality. He says things that he thinks are perfectly normal, which deeply offend large sections of the population.

Most of the commentary around Abbott’s pathetic interview on 7:30 this week has centered around his admission that he didn’t read the BHP report he had been commenting on all day. But there was another question that showed Abbott’s true colours:


LEIGH SALES: Do you – I’m asking you though, not about the Government. I’m asking: do you accept that it’s legal to come to Australia to seek asylum by any means – boat, plane – that it is actually legal to seek asylum?

TONY ABBOTT: I think that people should come to Australia through the front door, not through the back door. If people want a migration outcome, they should go through the migration channels.

TONY ABBOTT: And Leigh, it’s the answer I’m giving you because these people aren’t so much seeking asylum, they’re seeking permanent residency.

It’s language like ‘the back door’, and the suggestion that people arriving by boat are somehow trying to ‘cheat’ the system to get permanent residency, that shows who Abbott really is at his core. He has no empathy with the plight of desperate people who are risking their lives to escape unimaginable terror. He’s never been desperate or scared. He’s never had to make a tough decision — so why would we, as a country, let him make tough decisions on our behalf?

Abbott wants power because it will make him feel good about himself. He’s not a leader. He’s a fraud. With a year until the next election, I hope that more Australians see him for who he really is. His success in life, to use his own phrase, arrived ‘through the back door’. The back door of a petty, privileged, life.