There is a growing consensus that the Abbott Government is no longer fit to represent us. Natalie Cromb concludes that it is the most sinister and immoral group of individuals in Australian history banded together by individual wealth at the expense of ours.

I DON'T know anyone that voted for the current government – perhaps I do and they’re too ashamed to admit it – but in any event, it feels as though every person I speak to is either in a haze of confusion or in a state of irate contempt. One thing is for sure, there is consensus among those I speak with that this government is not fit to represent us.

At best, it is the most incompetent and intellectually void example of elected government and at worst (and perhaps more accurately), it is the most sinister and immoral group of individuals banded together in a common goal of individual wealth accumulation (theirs) at the expense of the Australian people (us).

We have an election campaign that was a corporate victory predicated on a misogynistic smear campaign from Murdoch media run with the slogan of vilification of all minority groups; immigrants, Indigenous people, single mothers, old aged pensioners, Muslim people, scientists, the LGBTQ community and any woman who perceives her reproductive organs to be her own. Let us not forget the catch phrase of “the age of entitlement has come to an end.”

Since Abbott and his merry band of right wing corporate lackeys took office they have dismantled the scientific advancement of our country, they have undermined the environmental future of this land, devastated the Indigenous population with further subversion and vilification, bullied Aunty ABC, demonised the most vulnerable members of society, decimated funding to programs for domestic violence victims in a time where we are experiencing the deaths of two women a week as a result of domestic violence.

We have seen the increase of a Visa labour force, with a relaxation of the skills required to do particular jobs that Australians would need to be qualified for. We have seen increased tax cuts for Liberal donors, we have seen the highest unemployment rates in over a decade, and we have seen worsening living standards for all Australians but particularly devastatingly, an abhorrent level of decline for Indigenous Australians on land that is rightfully theirs and being profited from by the greedy LNP donors.

Then comes the shameless misappropriation of public funds by politicians of all levels. Tax paid by hard working Australians that is intended to support the Australian people to achieve a base level of living is being used to pay Joe Hockey’s wife’s mortgage. Tax-payer dollars are being used to give Bronwyn Bishop a $5,000 helicopter ride to a Liberal function.

I don’t care what technicalities Joe Hockey is claiming, he knows that the expense claims are not intended as a rort like this and any denial that this is the case demonstrates just how unfit he is to be drawing a salary paid for by us — the Australian people.

Why do they get away with it? Because the system is corrupt.

Sit down Lib supporters and swallow your outrage — I’ve had quite enough from you merry bunch of trolls and I’m just getting started.

In the six-month period from 1 July 2014 to 31 December 2014, nine LNP ministers claimed expenses that were just shy of $4 million.

I know, it takes a while to digest that, but the truth is, in just six months, nine government ministers claimed expenses from tax payer funds that would be the equivalent of 120 Australians getting a four year university degree, or 213,000 Australians getting preventative cataract treatment or feeding 1,000 homeless people for a year.

Tony Abbott alone claimed $1,057,675 in addition to his generous housing, transport and clothing allowances along with his $503,000 annual salary.

If we average that $4 million and extrapolate that for the entire ministry, we are looking at a government expense claim over a six-month period in excess of $17 million. Think of the difference this money could make for domestic violence shelters, for children who have parents struggling to make ends meet and going to school with rumbling tummies, what about the many homeless throughout Australia.

The money claimed for frivolous and nonsensical travel, shameless fine dining and first class everything could have been changing the lives of the very Australians that public monies are intended to be spent upon.

But what if the whole system is broken? Where we have the corrupt pointing fingers at someone perceptibly “more corrupt” to deflect from further corruption, or worse, the deflect from sinister political agenda making its way through parliament?

Where is our recourse? Who is our knight (sorry, I couldn’t help myself)?

Australia is broken, so broken that – at times – it feels hopeless. But we need to spare a thought to the Australians who don’t have the means to speak out: 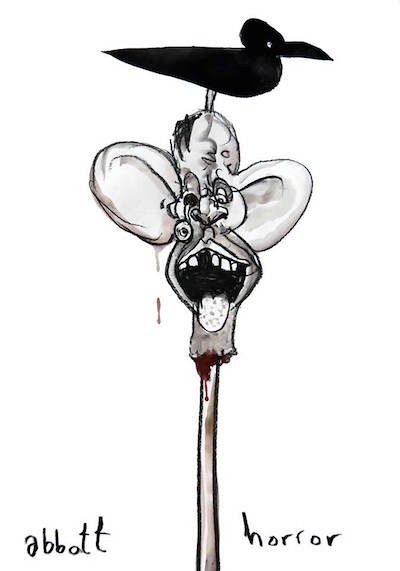 We owe it to our brothers, sisters, neighbours and strangers to resist the cruel measures of this government. We need to fix this country with love and intelligence. We need to invest in our nation and environment and not pillage it to the point of complete decimation.

We need to start our fight at the polling booths and when we elect a new government, we need to be strong, united and controlled in ensuring that whatever government is next elected is held to account by the people and not allowed to run rife like the current despots.

We need to remind the public servants who they serve and that they ought not fear their corporate donors, but rather the people, because when we shed the ingrained apathy and selfishness — we can be a truly remarkable people.

Let us earn this democracy we so widely take for granted by getting it to work for us once again.

You can order John Graham's original cartoons including the one above from the IA store.

And the funniest part… #auspol pic.twitter.com/P55jWbC8kZ

Prefer your news independent of vested interests? Subscribe to IA for just $5.