The Abbott Government is signalling that, in order to survive, the lowly plebeian masses must be prepared to return to the ‘dark ages’ and live a Hobbesian life — ‘solitary, poore, nasty, brutish, and short.’

But does it have to be that way? Do we have to live by the slogan alone?

In desperate ‒ budget emergency times ‒ such as these, we are told, we can no longer afford to invest in science, the arts, trees, a liveable climate, public education, universal health care, refugees, alms for the poor sick and elderly, canned fruits or a car industry.

It is a cruel irony that no sooner had Abbott repeated his road pledge at 100 days that two months on, Toyota has announced that it is pulling out of Australia in 2017.

“I want building the roads of the 21st century to be a hallmark of my government.”

We may get roads but we won’t have the cars. At least not a car industry in Australia, nor its associated jobs. Australia might be ‘open for business’, but Ford, Holden and Toyota are all clearing out.

All told, thousands of jobs have been declared as lost from Toyota, Holden and Ardmona. Ford will cease production in October 2016 and Holden and Toyota in 2017. The decision also means the end of a car components industry that employs more than 30,000.

“… no-one ‒ however smart, however well educated, however experienced ‒ is the suppository of all wisdom.”

Tony Abbott obviously, meant to say the ‘repository’ of all wisdom, or it may have been a Freudian slip.

A few letters can make a big difference in politics.

So, when Joe Hockey apparently declared in a speech in London, in a pre-election teaser, “the end of the age of enlightenment”, it was easy to pass it off as something misheard — that Joe Hockey may have been misreported or quoted out of context. It could have been the error of a rooky journo.

Reported in a speech to the Institute of Economic Affairs on 17 April 2012, it took off in the media like a wildfire in a warming world. It became a viral runaway rogue slogan with a life of its own. It has recently been recognised as a windfall slogan for the Abbott Government.

Just when the ‘stop the boats’ and its variations seemed to be wearing thin, the ‘end of the age of entitlement’ took hold. The previous top election slogan, par excellence, had been the John Howard border protection election speech declaration

“We will decide who comes to this country and the circumstances in which they come.”

It is easy to get a slogan wrong, so it’s not a stretch to accept that words can be confused. Tony Abbott, slogan master, misquoted his own mentor John Howard. Just a small difference between Abbott’s we will “determine” and Howard’s we will “decide” but it isn’t quite as punchy.

A single word can make a big impact in the political arena.

It has been a slow burner, but is at last coming into its own. Almost two years after it was first misreported, Joe Hockey has declared with ponderous accentuation:

“I say to you emphatically … everyone in Australia … the age of entitlement is over, the age of personal responsibility has begun.”

This dovetails well into the next up and coming slogan ‘the age of personal responsibility’. This phrase has more gravitas than ‘the adults are back in charge,’ which is being quietly discarded along with ‘Australia is under new management and once again open for business’.

The business cornerstone has become clouded by the ‘end of the age of entitlement’ for ‘some’ industries. The Abbott government has declared that it ‘is sending a message that the days of government being a crutch for business are over’.

This no handouts policy, has resulted in Toyota and Holden manufacture being set to close and be lost to Australia , along with over 5,200 direct jobs and the loss of the car manufacturing and compenents industry. 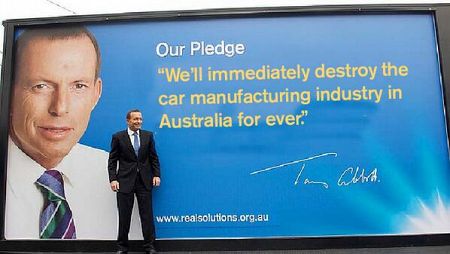 Then came the refusal to support Ardmona SPC cannery industry, which is expected to result in the loss of 1,500 jobs in the Goulburn and Murray Valley fruit growing industry  — and maybe thousands more, says Dr Sharman Stone, the Liberal member for the Victorian seat of Murray that encompasses the cannery. Abbott’s slogan dilemma is evident in his response — when he announced, in effect, we love you, but we are not going to help you.

That’s the problem with living by a slogan.

But what if Joe Hockey’s speech had been faithfully reported and the slogan of the moment had become ‘the end of the age of enlightenment?’

The period known as the Age of Enlightenment, which emerged around the 17th Century, was an intellectual revolution that lauded reason, logic, culture, the arts and heralded the scientific revolution and the scientific method. It has been seen as signalling the emergence from the Dark Ages — a time reputedly dominated by superstition, religious dogma, chaos, invasion and where women were denounced and burned as witches.

Despite the fact, that the post Roman Empire period may have been seen mythically and stereotypically for purposes of a slogan doesn’t matter. In fact, myth and stereotype are the lifeblood of the slogan.

So what does the end of enlightenment in modern Australia look like?

Well, here are some of the elements:

(Photo by Andrew Meares via afr.com.au)

On the other hand ‘the age of entitlement’ has far from ended — and is a really big problem.

Entitlements commonly refer to the meagre welfare set aside for the poor and disadvantaged and the growing numbers of the aged. Australia still pays the least in welfare  as a percentage of its gross domestic product (GDP) than any of the member countries of the organisation for economic co-operation and development OECD.

Welfare recipients are really amongst the common populace of the unentitled.

So what is the sense of entitlement?

A strong psychological belief in entitlement encompasses a deeply held attitude of ownership that excludes the rights of others. The poor and disadvantaged are depicted as undeserving and having brought misfortune upon themselves through profligacy. Everyone must carry their own burdens, even if they are frail. Those who amass money, by whatever means, are entitled to an excessive ‘share’ of the earth’s resources money and therefore of power.

These are, indeed, a reflection of the views controversially espoused by Abbott soon after becoming Opposition leader in 2010, as the cause of poverty:

In Australia, the entitlement doctrine allowed the British to seize the land of the Indigenous people under the lie of terra nullius and to keep celebrating the day that the British invaded Australia as its national day. It allows big coal in Australia to plunder the earth and damage the planet for future generations. It is the right declared by the world’s richest woman Gina Rinehart to call for very low waged labour and low taxes for her own companies.

It is wealthy Clive Palmer refusing to pay the $6.2 million dollars he owes the ATO for the carbon tax. It is polluters being given $3 billion to reduce emissions, while no sanctions are imposed as they continue to pollute.

A study published by Oxfam, ahead of the World Economic Forum held in January 2014 at Davos, found that the richest one per cent control 50 per cent of the world’s wealth.

The gap between the few very rich and the many poor is entrenched and widening.

Meanwhile, Abbott in Davos gave his unenlightened speech, which was not received with any global enthusiasm and prompted one British journalist to ask — does Abbott always make the same speech?

The answer is yes.

It is Tony’s ‘end of enlightenment speech’, promoting infinite economic growth on a finite planet, unfettered markets and the old elite entitlements of the already privileged.

So, if there is any truth to be found in slogans, it is not necessarily revealed by the slogan. As the master of slogans, Nazi Propaganda Minister Josef Goebbels is reputed to have said:

‘The most brilliant propagandist technique will yield no success unless one fundamental principle is borne in mind constantly — it must confine itself to a few points and repeat them over and over … for the truth is the mortal enemy of the lie.’ 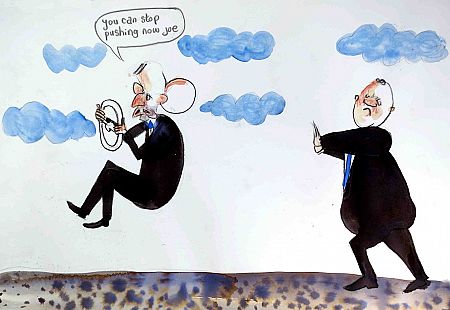