Despite COVID-related disruptions, if the remainder of the AFL season produces just half of last week's excitement, we are in for a ripper round of finals, writes Ronny Lerner.

AFTER 23 rounds of home-and-away football and no shortage of COVID-related disruptions and obstacles, AFL finals are finally here.

And if the last nine games of the season produce half the amount of excitement that the final round did, we are in for an absolute treat.

It’s hard to remember a more memorable round of football, especially when you consider what was at stake.

On Friday night, Port Adelaide climbed off the canvas against the Western Bulldogs to hit the front for the first time with less than five minutes to go and ultimately clinch a thrilling two-point win.

The result gifted the Power a top-two finish and, more importantly, put them in the box seat to potentially stay in Adelaide for the entirety of the finals, given the MCG will almost certainly not play host to the grand final for the second year in a row. 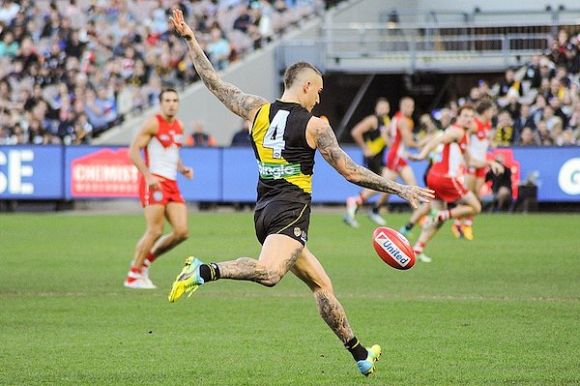 With only five rounds to go before AFL finals, chances to make it into the coveted top eight are narrowing for teams who may have left their run too late.

The Bulldogs’ grip on a top-four spot was left hanging by a thread and the torture would only worsen on Saturday as the fifth-placed Brisbane faced West Coast, the Lions hellbent on wrenching the Dogs’ double-chance from their grasp.

Over the course of the match, the Lions entered and exited the top four on a total of nine occasions in a real-life drama that not even scriptwriters could conjure up. The last of those reshuffles came with 30 seconds to go when Lincoln McCarthy kicked a behind to put Brisbane 32 points up against the Eagles, overtaking the Bulldogs’ percentage and securing a top-four place in the most thrilling fashion imaginable.

Charlie Cameron emphatically put the Dogs out of their long, drawn-out misery on the siren with one last goal to see Brisbane finish a measly 0.5% ahead of Luke Beveridge’s side, relegating them to fifth.

And if that wasn’t enough heart-stopping action, Melbourne fought back from 44 points down against Geelong at Kardinia Park to win by four points on Saturday night and grab its first minor premiership since 1964 — captain Max Gawn’s after-the-siren goal sending the red-and-blue faithful into delirium.

It was one hell of an appetiser for the main course and after all that drama – as well as victories to Greater Western Sydney (GWS) and Essendon – our top eight for 2021 was finalised.

So how does each team stack up in the pursuit of this year’s premiership cup?

In order of ladder position

Can the Demons finally break the curse of Norm Smith and end the VFL/AFL’s longest active premiership drought?

After 57 long years, this writer believes they will. But if they did, you couldn’t help but feel for their long-suffering fans, given finals will almost certainly not be staged in Melbourne for the second year in a row, meaning success-starved supporters from their heartland could potentially miss out on witnessing history being made from the stands. (Bulldogs and Richmond fans must count their lucky stars that they avoided such a fate when their clubs ended their long premiership droughts in 2016 and 2017 respectively.)

However, on the plus side, the Demons look like the most complete team in the top eight, with a sensational midfield featuring the likes of Gawn, Christian Petracca and Clayton Oliver, two defensive generals in Steven May and Jake Lever, and a belatedly functioning forward line with Ben Brown finally looking at home in the goal square. They have an exceptional 8-2 record against the top-eight teams, too, including a perfect 3-0 against fellow top-four sides.

The Power are purring along nicely, having now won nine of their last ten games and choosing the perfect time to register the club's first win for the year against a top-four side last weekend. Its failure to do so over the first 22 rounds had just about been the only knock on the club, but now that those concerns have been addressed, the team can take another boost of confidence heading into the finals.

As it was last year, the Power find themselves in the fortunate position to be one of the few sides to get home finals and are the only such team to enjoy that luxury this weekend against the Cats. They weren’t able to fully capitalise on playing two home finals last year, but, as they say, success is hardly ever achieved without some finals heartache along the way.

Their agonising preliminary final loss to Richmond in 2020 could provide the extra fire in the belly to help them go close to a second AFL flag this year.

How dramatically the fortunes of a team can change thanks to just one kick. Gawn’s now-iconic goal pushed the Cats from top spot and a first-up meeting with Brisbane on neutral territory in Adelaide, down to third position and a qualifying final against the Power in front of their home fans (albeit with capacity expected to be capped at 15,000 at Adelaide Oval).

Geelong’s inability to finish off the Demons after leading by more than seven goals could end up haunting them for a very long time, especially as this year looks like their final roll of the dice with so many players aged 30-and-over in their line-up (although, we do seem to say that about Geelong almost every year and they keep defying gravity). Nevertheless, their quest to end a decade of near-misses has been made a lot harder, especially without key players Tom Stewart (foot) and Zach Tuohy (hamstring) due to injury.

Their last month of form has been unconvincing, to say the least, but they do have the double chance and have already beaten the Power in Adelaide this year — so, they’ll still back themselves to cause some damage throughout August/September.

Talk about coming good at the right time of the year. The Lions’ top-four hopes looked dead and buried three weeks ago when they dropped to sixth spot after losing to Hawthorn – their third defeat in the space of four weeks. But luckily for them, they rediscovered their ruthless and aggressive edge in the final three rounds, beating Fremantle, Collingwood and West Coast by an average margin of 62 points to barge their way into the top four in the final minute of the season.

Like the Power, Brisbane is the only other team that will be capable of enjoying genuine home-ground advantage during finals due to the COVID crisis gripping the nation, so will relish that scenario either in week two or three. But the Lions would much prefer to use that trump card in a preliminary final — so, a victory over the Demons in their qualifying final becomes even more massive than usual. If they were able to achieve that, then the sky is the limit for Chris Fagan’s team.

How has it come to this? After spending 20 consecutive weeks in the top four – including eight rounds on top of the ladder – the wheels have fallen off the Bulldogs in spectacular fashion. After failing to lose consecutive games all season, the Dogs lost their last three matches to be relegated to fifth spot and a sudden-death final against the Bombers. There’s no team heading into the finals in worse form than Luke Beveridge’s side. They seem to be really struggling with the absence of Josh Bruce (knee) and Stefan Martin (groin) while their vaunted midfield is being shown up, particularly at stoppages.

And just to raise apprehension levels even higher, they will come up against the team that kickstarted their fall from grace a mere two weeks ago. The Dogs memorably won the flag from outside the top four in 2016, but they’re going to require a miraculous form turnaround to string four wins in a row from here to replicate that effort.

One of the surprise packets of the season, the Swans have defied pre-season expectations to finish in the top eight. In hindsight, we should’ve seen it coming, because John Longmire-coached teams historically don’t stay out of finals action for too long.

Some new blood has expedited their regeneration, but the contribution from established stars such as Luke Parker, Josh Kennedy, Lance Franklin, Tom Papley, Isaac Heeney, Callum Mills and Jake Lloyd cannot be understated, while the recruitment of journeyman ruckman Tom Hickey has proven a masterstroke.

The fact that they haven’t been able to play in Sydney since Round 13, yet won seven of their last nine games is a testament to not only the mental strength of the playing group but also how tightly-knit they are. It’s going to be a tough ask for them to go all the way, but they’ve already defied the odds on numerous occasions this year. The Swans' nothing-to-lose mindset could be their secret weapon.

The Giants are another team that was not expected to make the finals and after starting the year 0-3, those prognostications looked justified. However, to coach Leon Cameron’s credit, he was able to gradually turn the tide as the year progressed, despite a wildly fluctuating form-line in the back half of the year and also having to contend with life on the road for a prolonged period like the Swans.

Thanks largely to their powerful midfield unit, GWS have qualified for their fifth finals campaign in six years. And as fate would have it, they take on local rivals Sydney in a final for the third time, but sadly their cut-throat meeting will be staged in Tasmania instead of at the Sydney Cricket Ground.

Can the Giants win their maiden premiership this year? Probably not. But season 2021 looks like it could end up being a vital building block for their next generation’s assault on a flag.

Just qualifying for the finals has been a monumental achievement by the Bombers. Like GWS, Essendon experienced a mass exodus of high-end talent after failing to make the finals last year.

They were widely anticipated to finish near the foot of the ladder as a result. And at 2-6, they looked headed that way. But rookie coach Ben Rutten has worked wonders to turn his team into one of the most exciting and damaging sides in the league this year. They might be at the bottom of the heap in eighth position, but don’t be fooled by their win-loss record, because they lost four games by a total of 13 points and could so easily be further up the ladder.

The Dons also head into the finals in great form, having won their last three games — and pushed the Swans to the end before that. The Bombers will also be buoyed at having beaten the Dogs only a fortnight ago, with memories of Peter Wright wreaking havoc still undoubtedly fresh in Bulldogs’ minds. Beating the Doggies twice in a month would be a hell of an effort and if Essendon were able to achieve that, they would also end their 17-year stretch without a finals victory.

The flag is an extreme long shot this year, but excitingly for the Bombers, their premiership window could open as early as next year. And if they head into 2022 with a finals win under their belts, that would be an added bonus.

7 December 2021, 11:00am The biggest and oldest rivalry in world cricket resumes on Wednesday when Australia ...
Join the conversation
comments powered by Disqus
News updates