Entertainment editor John Turnbull talks to singer/songwriter Beth Hart about music, addiction, tattoos and performing in front of the Obamas.

IA: You’re about to release your latest album Bang Bang Boom Boom in Australia, and the album contains a wide variety of styles from Blues, to Rock and even Jazz. Without wanting to play genre bingo, how would you describe the album?

Beth Hart: I’ve always tended to write pretty eclectically, because I was influenced by so many different genres of music growing up. Even today, I’m still discovering new genres of music and wondering how challenging it would be to record a song in that vibe. But taking all of that into account, I think this is probably the Bluesiest album I’ve ever done solo.

IA: Caught Out in the Rain has a sort of a Tom Waits crossed with Aretha Franklin vibe; were you thinking of either of those artists when you wrote the song?

BH: Oh, wow. It’s great that you bring up Tom Waits because I just worship and adore him, so that’s a wonderful compliment. I certainly listened to lots of Aretha Franklin in my teenage years and I still do to this day.

To be honest, I can’t take all the credit for that song as I had a co-writer, a wonderful singer and songwriter called James House. He came to a show of mine and invited me to come to his studio the next day to write a song together, and he even had a title: Caught Out In the Rain.

IA: After watching a few tracks on YouTube, I have to say that you have the ability to rock pretty damn hard, particularly in your duets with Slash. Have you thought about releasing a straight out rock album?

BH: The first record I did with Atlantic Records was called Immortal, and that was a pretty hard rocking record, and it would have been even harder rocking if we hadn’t been put in the studio with producers who mellowed it out a bit. After that I did another record called 37 Days, which was also pretty rocking; that one came out seven years ago.

IA: You’re heading to Australia for Bluesfest in April; will this be your first time here?

BH: I’ve never actually played a show there, but I did spend some time in Australia in my late twenties doing publicity. That seems like aeons ago… I’m really looking forward to coming back.

In addition to Bluesfest, I’ll also be playing some side shows, which I’m so excited about. Hopefully I’ll have a bit of time between shows to soak it all in — I usually play about four shows a week, so I hope we get to do that.

IA: You’ve played with some amazing artists over the years, but I’d like to ask you about your recent duet with Jeff Beck in front of an audience that included the Obamas.

BH: I was invited to play at this once-a-year show that’s on at Christmas called the Kennedy Center Honors. It was actually set up by the Kennedys themselves and each year they choose five individuals who they feel have contributed significantly to the arts. To honour these people, they choose artists to come in and perform for them.

I’m old friends with Jeff and he showed up out of the blue at the taping of an English TV show called Jools Holland. He told me then that he was going to call me about something cool and a few weeks later I was on stage honouring Buddy Guy.

It’s funny, it’s one of the few times on stage that I haven’t been nervous, I was just so happy to be there that night.

IA: Changing tack slightly, what are your feelings on internet music piracy?

BH: It’s a double-edged sword. The fact that not a lot of people buy records any more has hurt artists financially, but on the other hand, people do discover new music that way.

For someone like me who has no idea what it would be like to be a superstar, it’s great. I mean, my records don’t really sell millions of copies, so if you discover me through a pirated album and come to the see me play live, then fantastic.

IA: You’ve been playing music for a few years now, what do you think of the young women of rock like Miley Cyrus or Ke$ha?

BH: I think it’s awesome when you see young artists work hard and go on to great success, because you know if you’ve been in this industry for a while how difficult it can be.

Speaking of Miley Cyrus, her career has been unbelievable and, while it may not be my kind of music, I think it’s great that she has such courage and strength to be herself.

One singer who really moved me, in a way that I haven’t been moved since I first heard Etta James, was Amy Winehouse. She just blew my head off. To this day I still go online and watch her shows and interviews… She was one in a billion, really.

IA: Amy faced a lot of personal demons during her life, with substance abuse ultimately cutting it tragically short. You’ve been open about your own issues with addiction in the past; do you see any difference from the path that Amy took and the one that you went down?

BH: No, I don’t see a difference. The path that she took is exactly that path that I took.

My sister died from the results of alcoholism and drug abuse and she also had food issues. I recognised this with Amy; she was obviously doing alcohol and drugs, but she had food issues as well.

I got wrapped up in bulimia and anorexia myself, so it was like looking in a mirror seeing what Amy was going through. I used for so many years and so many different substances to numb myself.

I remember when my husband told me that she had died, it felt like I had survived a plane crash. It profoundly affected me, and does to this day. How come I survived and she didn’t?  I don’t know.

IA: To lighten the mood slightly, you have some beautiful tattoos. Are you planning any more?

BH: I’m pretty sure I’ve stopped. I got most of my tattoos within a single year, when I was twenty seven years old. I started dating a tattoo artist, and he did some beautiful work.

After we broke up I went to see this famous artist called Greg James, who usually has like a two year waiting list and got a couple done by him.

And then I got sober, and I realised that I didn’t have anything to numb the pain anymore! Even so, I had a couple of tattoos that reminded me of bad times, when I was really sick, so I decided to go back to Greg to have them covered up. This was only a couple of years ago. He covered them with the biggest tattoo I have, and it hurt so frickin’ bad, and took like sixteen hours; the art is beautiful but it was the most painful experience of my life.

IA:  Beth, thanks very much for your time. I look forward to seeing you live in April.

BH: It was my pleasure, you made me laugh. 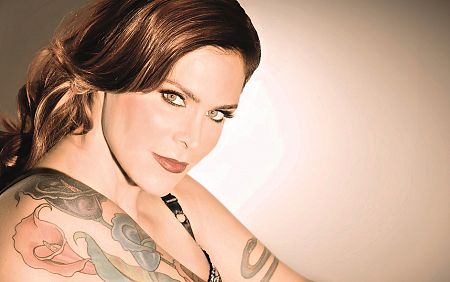