What will we leave for our children?


THE NOTE I received with this cartoon said: “worth a few tears.”

At first, I thought it was an anti-government message.

Then I noticed the race track spiv, forever carrying no weight, taking no responsibility, but with an opinion on everything.

It left me feeling I wanted to share a story that hopefully is worth more than "a few tears." 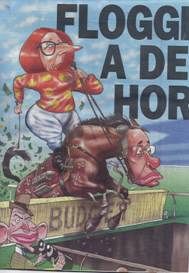 The trees in the background of the above photo are Eucalyptus globulus (Tasmanian Blue Gums). They grow on our block in Bridgetown, Western Australia.

We first harvested them just over four years ago. The logs went to Bunbury for chipping and were then shipped to Japan.

Like many in the eucalyptus family, when the trees were cut down the stumps quickly sent out young shoots. The weakest of these were cut back, allowing the strongest shoots to grow into mature trees. They will reach 25 metres within 6 years, at which time we will conduct our second harvest.

By around 2045 these trees should be about 40 metres tall, up to a metre in diameter at the base, and ready for logging.

I don't expect to see that happen, but will my grandchildren?

The CSIRO has found there is a pattern of declining annual rainfall and stream run-off here in the south west of Western Australia. A trend that has been evident since about 1970. The region's average annual rainfall has fallen by around 20 % since that time.

If the trend of diminishing rainfall in the south west continues, annual rainfall in Bridgetown will be insufficient to sustain the Southern Mahogany trees.

The Blue Gums too, under these conditions, will stress and die before they reach maturity.

We may get the next crop of Blue Gum logs off in 2019 but the following crop, in 2029, is looking tenuous at best.

Annual surface run-off in the south west has reduced by about 45 per cent since 1970. We will need to build more desalination plants. Our dams are simply not filling up any more.

Farmers on the edge of the wheat belt aren't sowing wheat anymore. This is due to the reduced chances of their crops receiving suitable rainfall.


Australia has a long and storied history of drought. This current trend of declining rainfall has a duration of more than 40 years. It's not a normal drought, as much as it is significant climate change. This trend is different to other we have ever experienced.

I have great faith that mankind will turn this dire situation around by accepting the scientific fact that our climate is being changed by man-made emissions. However, drastic measures are required to halt the slide before it goes too far.

I have no faith that Tony Abbott, as prime minister, would provide the needed leadership in this crucial area.

He is committed to scrapping the price on carbon. Remember, this is the same price on carbon that has done what it was intended to do — reduce Australia's carbon emissions and encourage the increasing use of renewables.

Tony Abbott has in the past described climate change as "crap".

He promises to repeal the carbon price legislation as his first act of government. He has said this forcefully, and with conviction, so many times that far too many Australians are now convinced the science of climate change is not decided. People like Andrew Bolt applaud him for doing so, and clearly encouraged by this, Abbott has continued with his deceptions.

The science on climate change is decided.

97 per cent of peer-reviewed scientific papers on the subject conclude that climate change is being caused by man-made activity.

The Murdoch and Fairfax papers are doing a disservice to all Australians by not countering the deceptions of Tony Abbott and the Coalition.

Quite frankly, they are failing Australia.

It can be safely said that they want him to win this year's federal election.

Back to my grandchildren.

Unless the trend of diminishing rainfall is arrested, their world will not be as rich as ours.

The world I leave for my grandchildren will almost certainly not be as good as the one I enjoyed in my lifetime. The one my grandparents left me.

I don't like to think about that too much.

So, in hope, I am going ahead with the planting of these trees, believing that mankind will find a way to halt the slide.

Australia must play a part in the global effort, for the sake of our children, grandchildren and generations to come.

My grandchildren may yet get to see those Southern Mahogany standing proud and tall.

Shorten should set a good example and release citizenship documents

What will we leave for our children?