Instead of trying to control nature, how about a system of farming that works with nature? Dr Matthew Mitchell and Angelo Eliades report.

Bill Mollison, the co-creator of permaculture, once said that the most subversive thing you can do is to grow food.

Why would he say this?

Well permaculture began, in part, after Bill studied on the farm of Masonoba Fukuoka in Japan.

Masanoba Fukuoka was an agricultural scientist who walked away from modern agriculture after he noted that for every problem we solve we create three more.

See the One Straw Revolution:

Instead of trying to control nature, he developed a system of farming that worked with nature.

And, after a few years, his farm produced more than his neighbours’ farms, and he did it without buying anything except hand tools. He used no chemicals, no outside fertilizers, no herbicides, no insecticides, no machinery and no fuel. All of which are significant expenses for farmers.

For 20 years, he produced the same or more per acre as other Japanese farmers. It is no surprise that agricultural supply companies were silent about Fukuoka’s farming methods. They have, however, happily continued promoting their usual ‒ quite profitable (for them) ‒ practices and products.

Fukuoka lamented the fact that Japanese farmers could once produce nearly everything they needed off half an acre — food, building materials and wood for heating.  He hoped that one day Japanese people would return to this way of life.

Fortunately, some saw the significance of Fukuoka’s methods  — and people like Bill Mollison and David Holmgrem have continued the development of Fukuoka’s natural farming in the form of permaculture.

One important idea from natural farming and permaculture is the concept of a food forest – working with nature to create a highly efficient and productive ecosystem on either a small or large scale.

One of the most successful demonstrations of this has been achieved by Angelo Eliades in Northcote. In a small suburban backyard (150 square metres) Angelo consistently produces over 200 kilograms of vegetables a year. He has recorded his yields now for 5 years. On a per acre basis he produces the equivalent of 12,773 kilograms per acre. Per acre, Angelos’ output is six times the average output of commercial wheat farms in Victoria (by weight). 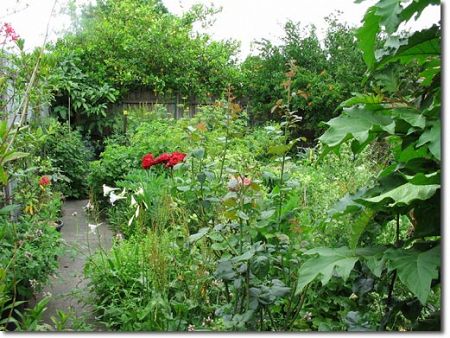 Angelo and other locals have also collectively created a sizable community food forest in Northcote. People come from all around the local area to work in the garden and harvest the bounty.

At only two years old, this forest garden is already beautiful.

Unlike regular vegetable growing which often has large bare patches of land, forest gardens are full of life all year round, with a wide a variety of plants and flowers. As you walk around the garden, you are treated to a range of colours, aromas and tastes — if you choose to sample anything on the way.

The community is now planning another larger food forest in the All Nations Park.

So why is growing vegetables so subversive? As Fukuoka demonstrated, it undermines our entire consumerist economy and the power of those who run it and benefit from it.

Currently we are largely reduced to purchasing what others have created and are denied, or distracted from, creating ourselves. So, rather than working as self-reliant people in beautiful gardens of our own, we purchase commercial food grown far away, which is then trucked in to large, ugly super-stores.

To pay for this, we are locked into a cycle of time consuming and frustrating travel to work; work that is undertaken for large uncaring organisations in often powerless ‒ and perhaps depressing ‒ circumstances. Not all of us of course, but certainly many.

Thus we play our part as one cog in a system that is rapidly destroying the planet. As compensation for this loss, we are fed a barrage of consumer items supplemented by movies and TV shows which, with few exceptions, repeat the same plot lines and formulae over and over and over again.

How many of our social problems could be solved by empowering people to become more self-reliant?

How much healthier would we become if our children were raised on food grown and picked in their own backyard or neighbourhoods? Real food, rather than synthetic or fast food?

How many refugees could we take in if we decided to be a bit more generous with our land? Teaching them how to grow food forests and setting them up in new vibrant communities to replace the trauma they have left behind?  What sort of a new world could we create?

But don’t expect many of those who currently benefit from our dependence on the existing food and consumer system to be promoting these ways of living.

Don’t expect them to give up the power or privilege or wealth that they gain from your role in this extractive system that contributes to war and environmental damage globally.

Instead, it is up to up to people like Angelo and the few wise policy makers out there — such as those who are now supporting Angelo and others in their community to create these food forests on public space, the produce from which can be shared freely by anyone who wishes to forage for their own food.

Through this, a new vision is offered to communities; offered not by grand politicians, nor by powerful leaders of industry, but by gardeners.

1 December 2013, 4:30pm Instead of trying to control nature, how about a system of farming that works with ...
Join the conversation
comments powered by Disqus
News updates